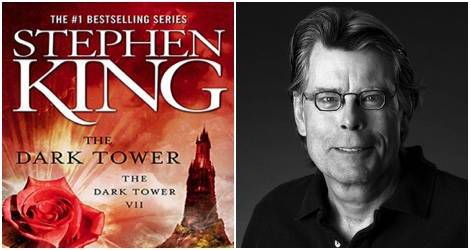 You’ve probably heard that a Dark Tower film is actually in the works, starring Idris Elba and Matthew McConaughey (slated for next February). Are you excited? BECAUSE I’M EXCITED. I only just finished listening to the entire series, a journey that took 10 months. Why so long? I started it just after my daughter was born, and listened in bits and pieces almost every night while I washed dishes or folded laundry. What an experience.

But for those of you who’ve read the entire series, you know what I’m talking about. This is old news to you. But the fact that this movie news came out just as I was finishing the series seemed particularly ka-ish, if you know what I mean.

Now, I wrote a somewhat comical piece recently about the series, but today I’m here to tell you (specifically, those of you who haven’t read it, or only read part of it, or read it and didn’t like it) why the series is a masterpiece. I’ve read a lot of Stephen King over the years, but this…this is truly his magnum opus, as King himself knows. It has followed him through the years and through his other novels, just as Roland followed the Man in Black and the road to the Dark Tower. And it is that interweaving of the Dark Tower story and King’s own life and writing that gives the series added weight.

Other reasons why it’s genius? I have many. First of all, King created a new dialect of English called “High Speech,” which Roland and the people of Gilead, among others, use. It’s a formal, elaborate kind of speech, setting Roland apart from the rest of his group (ka-tet), all of whom (except for Oy) come from mid-to-late-20th-century America. Such a way of speaking lends him a magisterial, almost regal air. King draws it through the entire series, elaborating on it here and there, introducing new words and expecting the reader/listener to incorporate the language into her own brain in order to understand the story. Basically, King makes the reader work.

Next, King weaves his own experience getting hit by a truck on a road in Maine in 1999 into the fabric of the series, thus adding yet another layer to the already complicated tapestry of the tale. We already had to deal with the weird ways in which time works (slowing down and speeding up, depending on where one is at the time), as well as the fact that the characters come from different time periods and different universes (i.e. Roland is from one universe, while the rest of his ka-tet is from another- 20th century America). So when King writes about Jake saving his life by jumping in front of the oncoming truck in Maine, thus saving King from getting completely slammed, the reader’s brain starts to smoke. Ok, my brain started to smoke. And when Roland visits King and hypnotizes him…well, that was some crazy sh*t.

Some people might not like King inserting himself into the story, but I found that it added an extra dimension that was intriguing. How do writers view their characters, especially characters that they’ve developed over several years? Do these individuals become almost tangible, and a part of the writer’s own life? Seems quite possible to me, but I’ve never written a novel, so who am I to say.

And then you have a character like Susannah, a black woman from the 1960s who lost her legs years earlier, kicking ass and taking names in every book of the series, and did I mention that she does this all without legs? She’s unbelievably tough and determined, and puts many of the other characters with all of their limbs to shame. Oh, and she also harbors at least one other personality in her brain at all times (Detta), a more violent, sadistic individual who emerges at key moments. (Mia only stays for a little while). Susannah must keep Detta in check at all times, and that’s not easy. But she does it, all while throwing sharpened dishes and climbing around unforgiving terrain and falling in love with Eddie Dean and jumping back and forth between universes. NOT BAD.

Also, you have stories within stories throughout the series, contributing to the almost material heft of the tale. It stretches out across space and time, both within its own world and in ours. Roland’s own back-story is even its own book (Wizard and Glass– one of my least favorites in the series, but whatever). And then there are the stories of Calla Bryn Sturgis….

But the ending, guys. It wraps around on itself, like that episode of Star Trek TNG where they get stuck side-swiping another starship and exploding over and over again until they can send a message to their future selves about how to escape. Even though Roland is doomed, within the series, to repeat his quest forever, each time someone reads the Dark Tower series, it’s like that reader has escaped. I think about another TNG episode- where the holographic Professor Moriarty is convinced that he has been brought into the real world and flies off to the stars in a shuttlecraft, but we know that he’s still a hologram, trapped inside a continuously running program that the crew of the Enterprise can peek in on whenever they want.

King even interrupts the conclusion to directly address the reader, asking why he or she insists on a more “satisfying” ending- why do we want to know what’s inside the Dark Tower? Don’t we understand that it’s the journey, not the destination, that counts? But then, figuratively throwing up his hands, King obliges and explains what Roland saw, only to throw us back to the first line: “The man in black fled across the desert, and the gunslinger followed.”

And there’s just something about the juxtaposition of post-apocalyptic civilizations and decrepit technology that gets me all a-twitter.

The cycle of life and death; multiple universes; the mixing of genres (western, fantasy, science fiction, myth)- these elements help make the Dark Tower series the masterpiece that it truly is.

Let’s hope the film does it justice.