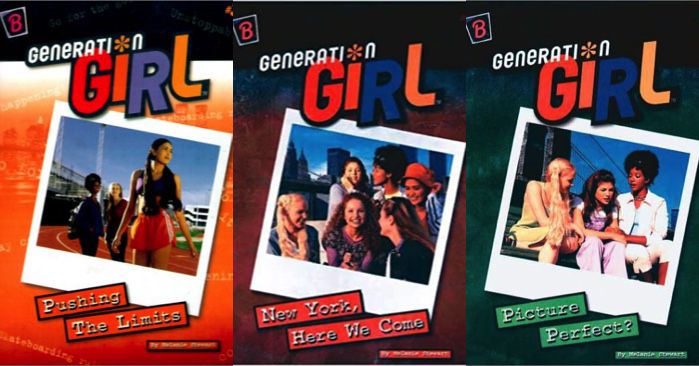 At an age when other Book Riot contributors were forming lifelong attachments to Sweet Valley High or The Baby-Sitters Club, yours truly obsessed over all things Generation Girl Barbie. I had the dolls and the Generation Girl: Gotta Groove computer game. While I no longer have these items, all 12 books written by Melanie Stewart and published by Gold Key sit on my bookshelf to this day.

The line’s big selling point was its diversity: each character came from a different background and had distinct interests, goals, and family situations. But this was the late ’90s. How diverse could these “way cool” teens really be? Let’s take a look.

(There were two other dolls in the Generation Girl line—Japanese Mari and token dude/Ana’s boyfriend Blaine—but they didn’t get their own books. You bet I had those dolls, though. Mari’s hair was so POINTY, it was great.)

As you can see, Generation Girl’s idea of diversity involved dipping into cultural stereotypes (of course the Parisian is artistic, etc.) and was fairly limited. Only a third of them (not counting Mari) are people of color, and none are disabled, non-Christian, or queer. (In a kinder world, Tori and Lara’s disastrous initial meeting and polar opposite personalities would have made for a great romance.)

The closest we get to queer rep went way over my head at the time: the girls are fans of Rent and, of all things, Hedwig and the Angry Inch—or, as it’s called here, Ursula and the Happy Inch. Not sure what the point of that was, but thanks for the laugh?

Manhattan International High School is a brand new school that welcomes kids with all different backgrounds and ambitions. The Generation Girls meet on the first day of school and become fast friends. They leave notes for each other under a loose tile in the hallway that only they know about (when it is unexpectedly sealed up, Drama Ensues) and spend their spare time at Eatz, a trashy but welcoming diner.

Each girl has her own goals, and several books (mostly the early ones) revolve around the progress of their budding careers. They deal with good teachers and boring ones, nice guys like Blaine and naughty ones like the principal’s rebellious son.

The meatiness of the plot varies by book. Stage Fright (Book 6) reads like an abridged Nancy Drew story, while Hitting the Slopes (Book 9) can be summed up as “everyone goes on a ski trip and some stuff happens.” But no matter the nature of their adventures, the girls can always count on each other. Aww.

The term “performative activism” has been floated a lot recently. It basically describes the actions of people who are more concerned with appearing devoted to a cause than being devoted. I think that’s the best way to describe the diversity in this series.

In the first book, New York, Here We Come, there’s a whole scene emphasizing the importance of accessibility. Three chapters later, they start a running gag about how the school’s elevators don’t work. How do disabled kids get to class? Who cares? The most we get on the subject is a very quick mention in First Crush (Book 11). A kid with “arm braces” (I guess they mean forearm crutches?) takes a while to get around the building, presumably due to the faulty elevators. But unlike with other injustices the girls encounter, they don’t seem to be mad about this one, or even to realize there is an injustice at all.

In Pushing the Limits (Book 3), Ana deals with a classist, xenophobic bully. The bully apologizes and makes up with Ana in the end, but only for cheating at a track meet. The fact that she insulted Ana’s clothes and her Spanish-speaking mother never comes up again.

Slightly better is Secrets of the Past (Book 6), in which Nichelle tries to save the African Burial Ground (a real place!) from a foul-tempered real estate developer who values money over history (but perhaps I project too much). The story is pretty weak, even for this series, but it brings up some important points about how slavery existed in the North as well as in the South.

And yet, again, little details betray a lack of thought or research. Nichelle has an “African-inspired rug” in her room, which tells me a grand total of nothing. Africa is home to literally thousands of different ethnic groups. By whom was this rug inspired, exactly?

And that’s performative activism in a nutshell: when you’re so busy going “look at me, look how smart I am!” that you forget to actually think about and engage with the issue you’re bragging that you know so much about.

That said, it’s not like no thought went into these books. You can tell they meant well. Ana’s family and living situation are described only in positive terms. The girls often take action against injustice rather than sitting around complaining about it. And of course, it’s great that six girls from such different backgrounds can respect and like each other. That’s certainly an important message.

And then there are the moments that have nothing to do with the above: the bits that are so outdated they’re now funny. The girls are dazzled by all the cool things they can do with the capital-i Internet, like printing off maps and creating hyperlinks. In Taking a Stand, Tori organizes a protest against a (largely mild) school dress code. That’s downright quaint compared to the stuff teenagers are protesting these days. And in Hitting the Slopes, there’s a suspenseful scene where Chelsie must get critical information to Barbie via FAX MACHINE. THE THRILLS.

Are these books masterpieces? No. But did the scenes at Eatz really make me want to eat cheese fries? Heck yeah.

I remember waiting for more of these books, but, despite promises made in the back of the 12th book about “more great Generation Girl titles to come,” it never appeared. Part of the reason may have been 9/11; the Generation Girl line was closely associated with New York City. (The World Trade Center is on some of the covers!) After the attacks, Mattel evidently decided to send the girls away from New York to avoid upsetting kids (or, one assumes, making any insensitive missteps).

Then again, the last book was printed in March 2000, well before 9/11. So maybe the books, if not the dolls, had already run their course. Whatever the reason, Generation Girl faded into obscurity, and I moved on. 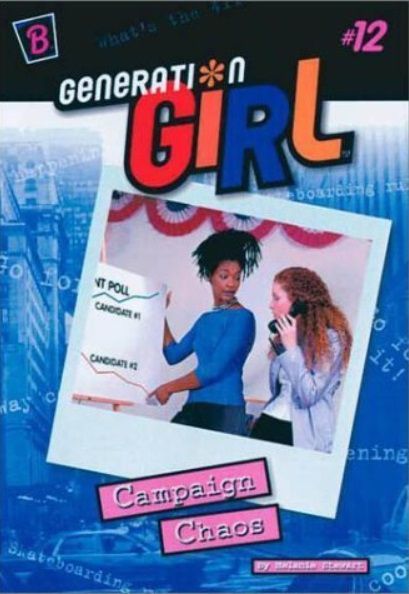 I don’t know how much of a following the Generation Girls still have. It might consist of just me and the person who runs the Wiki page I linked to above. But that’s okay. I’m happy to share my memories and mementos with the world.

These books are an amusing glimpse into the late ’90s. If Mattel were to reboot them today, I’d expect greater diversity of diversity: more girls of color, queer girls, disabled girls, and so forth. Mattel seems to understand that, if their current Barbie Fashionistas line is any indication. And in all sincerity, good for them! I’m glad that they’re able and willing to change with the times.

I don’t remember why I loved this franchise so much, but I feel that the diversity was a big factor. A lot of the TV shows I liked at that age also emphasized diversity to greater or lesser extents. And when I created my first long-lasting original characters a few years later, they reflected different nationalities and interests much the same way the Generation Girls did. Imperfect and rudimentary as it is, I really believe this franchise helped shape my worldview into what it is now.

And that’s what Generation Girl Barbie and her friends are about, really: listening to and respecting others, admitting your mistakes, and always striving to do better. That’s not a bad foundation to start from.