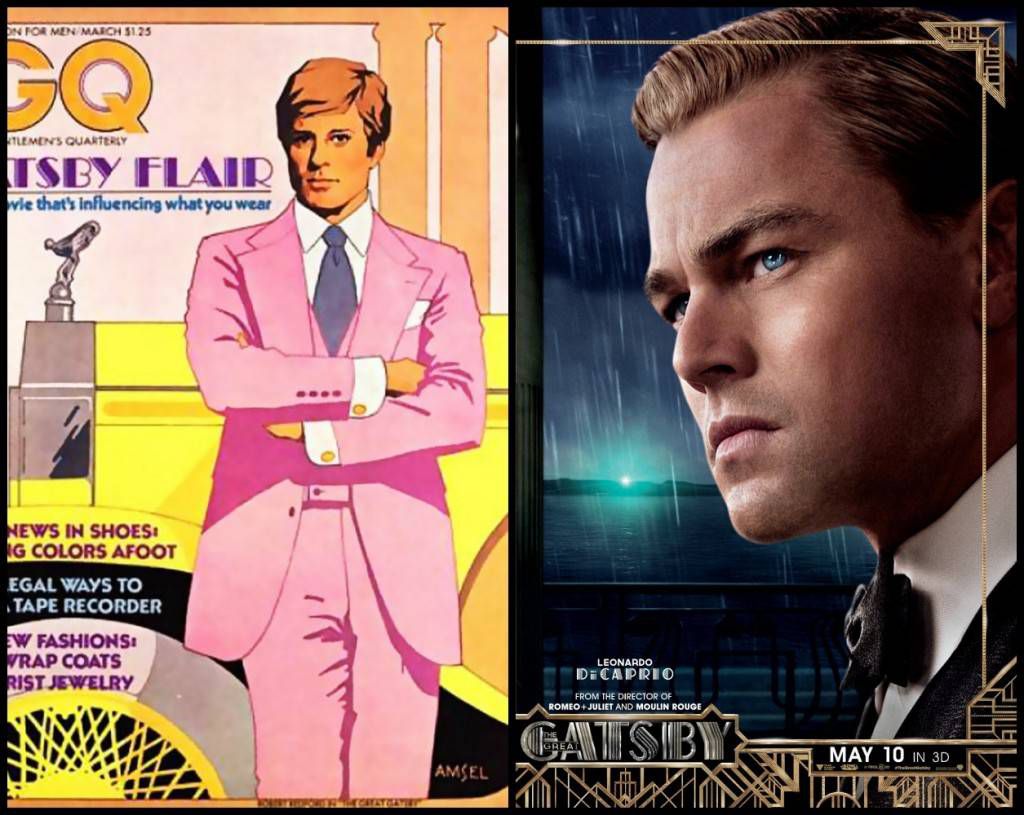 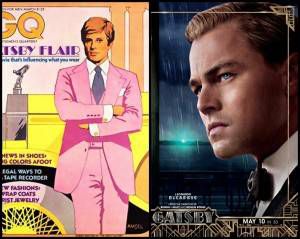 In the past seven days, I’ve seen two film versions of The Great Gatsby: first I went to see Baz Luhrmann’s cinematic spectacular!—I feel like every Luhrmann film title should be prefaced with circus ring leader-esque embellishment—in the theaters (this is a big deal, guys, the last time I went to a movie theater it cost four dollars), and then my mom asked me if I wanted to watch the 1974 version starring Robert Redford and Mia Farrow. The two films are actually fascinating in contrast, and if anything each made me appreciated the other more.

I had to watch the 1974 Gatsby in high school. I say had to because the only thing I remember from that experience is being BORED OUT OF MY EVER LOVING MIND.

On rewatching it, I can kind of appreciate how Jack Clayton (director) and Francis Ford Coppola (screenplay) were trying to make the book “cinematic” in a 1970s sort of way. It might have actually been a good movie if it weren’t for a few problems that I’ll get to in a bit.

As for the 2013 Gatsby, I’d forgotten that Luhrmann’s films always overwhelm me when I first see them. I left the theater with a massive headache and a general reaction of “Meh,” but I’ll probably like it more when I rewatch it. And it does have its redeeming qualities, especially in comparison to the 1974 version.

The opening of 1974’s Gatsby does a great job of introducing the story in a purely visual way. We see Gatsby’s fancy-butt house, his scrapbook of Daisy paraphernalia, his monogrammed hairbrush, and a photograph of her on his vanity. A guy with a vanity? That’s not a normal guy.

The beginning of Luhrmann’s version opens with Nick in a sanitarium whinging about how people drank too much. Back in the day. Which was like, what, a month ago? This intro makes me think the story is the rambling of syphilitic mind. Then a “doctor” tells Nick he should write this shit down instead of boring him with it, and THEN the movie starts. Because if there’s one thing The Great Gatsby needs, it’s more framing. *headdesk* 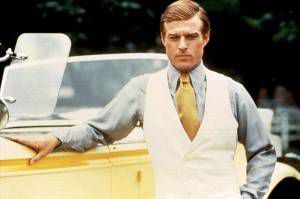 I don’t know about you all, but if there’s anyone who can look more like my mental image of Jay Gatsby than 38-year-old Robert Redford, I’ve never laid eyes on them. Which makes the fact that he really phones the role in that much suckier. He should have been able to hit this one out of the park; instead, he doesn’t show any emotion AT ALL. Leonardo DiCaprio, on the other hand, does manage to capture Gatsby’s intensity—that’s like DiCaprio’s schtick, right?—and manic mood swings and charisma. Gatsby’s vulnerability could use a little work, but you know.

Elizabeth Debicki plays golf star Jordan Baker in the most recent Gatsby, and she rocks that role out. I love Jordan now! Lois Chiles opens her mouth and blinks a few times in her portrayal of the character. You could honestly cut Jordan out of the 1974 film altogether and no one would notice. 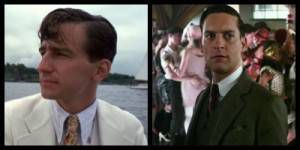 Which one of these men is Sam Waterston and which is Tobey Maguire? YOU DON’T QUITE KNOW, do you???

Nick is played by Sam Waterston in the 1974 version and Tobey Maguire in 2013, and I swear to god THEY LOOK EXACTLY ALIKE. Seriously. Are they related? Because they definitely could be.

And now for Daisy. After watching both these movies, I realized something: Daisy may not do much or develop as a character in any way during the course of The Great Gatsby, but she’s the most important person in the entire story. Like the king on a chessboard—if you lose it, game over. Personally I thought Carey Mulligan brought a lot to the role of Daisy. I could definitely see her as a bird fluttering against the bars of her gilded cage. She’s not a fool, but she wishes she could be so she might at least be happy. Mia Farrow, on the other hand… OH LORDY LORD, Mia Farrow. Her Daisy WAS a “beautiful little fool”; not to mention loud, obnoxious, dull, and kind of narcissistic. Gatsby chasing after some sixty-year-old harridan aunt would make about as much sense.

Probably the biggest difference between the films is in their sound—not just the soundtracks, but everything from dialog to sound effects. A lot has been made of Baz Luhrmann’s soundtrack and how appropriate it might or might not be (the Will Friedwald article about it in Wall Street Journal that Cassandra linked to a few weeks ago, for example). Luhrmann uses contemporary artists and musical styles, including hip-hop, as the soundtrack to his film, and I didn’t mind it when I saw the movie; but after seeing the 1974 Great Gatsby, which uses period music, I have to say I agree with Friedwald. It just made more sense and worked a hell of a lot better. Who knew music would be such an important component to Fitzgerald’s sensibility, eh?

Even aside from the soundtrack, though, Clayton’s Great Gatsby is a quieter movie. There’s no score, no crashes or sis-boom-bahs, and no shouting. Even the party scenes are quiet: instead of jumping into the pool and doing the Charleston, people do the tango. I would say it’s actually TOO quiet. There’s no crescendo, either sound- or story-wise. Luhrmann’s movie, on the other hand, might be a little too loud and obnoxious. But at least it kept me awake.

WINNER: DRAW Surely there’s a happy medium between these two.

I was going to conclude this without addressing the party scenes, but then I realized that was the crazy talking. No director can resist the lure of a party! I swear the opportunity to film a Gatsby party is the only reason this book has been made into a movie so many times.

Anywho, I think we all know Baz Luhrmann can direct a party. But I have to disagree with Kit (from her post Am I the Only Person on the Internet Who Liked the Great Gatsby Movie?) that he nailed the party scenes here. They seemed more Disneyland than debauchery. Although the party scenes in the 1974 version weren’t a spectacle by any stretch of the imagination, I could believe the people in them were actually partying. They were very nights-at-Max’s-Kansas-City. Like I said, no one’s jumping into a pool, but they were convincingly bacchanal.

Look, neither of these movies are the definitive version of The Great Gatsby. That’s still the book. On The Colbert Report, Luhrmann said the difficulty in filming The Great Gatsby was capturing Nick’s inner monologue, but I have to disagree. Movies are told from a single character’s perspective all the time. No, what makes Great Gatsby adaptations difficult is that, like another one of my favorite books, Jane Eyre, it’s about what the narrator’s not seeing, all the stuff that happens off the page. It’s not about the parties, it’s about what built the parties. Even worse, it’s about what people don’t WANT to see, because then the parties would stop.

That’s why, even though Clayton and Coppola made more of an effort to turn The Great Gatsby into an actual movie, it winds up being boring, because the meaning of the book isn’t in it. Despite Luhrmann’s comment, I think he does he understand what the book is about; and even though his version feels at times more like a recreation of the novel than a film adaptation of it, I can appreciate that he tried to show the things that are only alluded to in the book. I loved how he preserved the absolute awkwardness of the novel and, even though the line about Daisy’s voice sounding like money isn’t in the film, Luhrmann shows us that Gatsby doesn’t just want Daisy. He wants Daisy, and the house, and the car, and the pool, and the shirts. So many shirts! And Daisy damn well knows it.

So even though I did have some problems with the 2013 Gatsby, I definitely think it’s worth seeing if you love the book, and that overall it’s more successful than Clayton’s version.