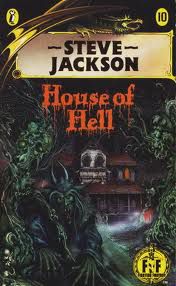 Forget your Hobbits, Harry Potters, Nancy Drews, or Lions, Witches and Wardrobes. The book that convinced my eight-year-old self that reading was more than something you did at school was one that gave me nightmares and prompted my aunty to pray for my soul when she found it in my bag.

I remember House of Hell fondly. The mine-shaft black cover. The title dripping blood. The lurid illustrations of headless spectres oozing gore. The plot based around avoiding being sacrificed by Satanists. Ah, it still gives me a warm glow.

For a primary school kid in Ireland this was contraband gold. And it made sitting reading a book the most thrilling way to spend the day. As a (theoretical) adult looking back, I can see it is the reason the smell of new books makes me weak at the knees, the reason why my flat is 10% bed, 10% kitchen, 5% bathroom, and 75% book, the reason why I am writing for Book Riot. House of Hell is my gateway book.

This schlocky adventure is the tenth book in the Fighting Fantasy series. Written by Steve Jackson and Ian Livingstone, two men who borrowed liberally from Tolkien, these books spearheaded the now-antiquated fad of allowing readers to choose their own adventures.

Written in short bursts of prose describing adventures set in a pseudo-Middle Earth, each entry culminated in the reader having to make a decision (Turn left, turn right, or chop the witch’s head off) and turn to the relevant numbered section.

House of Hell was far and away the scariest of these books. I should know: I collected nearly the entire 60-strong series. It not only unnerved my aunt. When published in the US in 1984 its name was changed to House of Hades. “Hell” was too risqué for your average Walmart shopper. And its HR Geiger-esque cover was swapped for something that looked like a cosy Victorian detective romp.

As a gateway book House of Hell does have its limits. It never taught me anything about plot (the gist was to avoid being scared to death), characterisation (the bad guys, with their goat’s head masks and sacrificial daggers, were all too obviously bad), or dialogue (most of it was simply screaming). All it did teach me, however, was that cheating pays. I always kept my finger at the previous entry, just in case my last choice led to death by fire demon.

As well as a belief that I can cheat death, House of Hell gave me one of the great litmus tests of age and social background, like rings in trees, sediments in soil samples, or appreciation of Joy Division.

Mention Fighting Fantasy to someone (for best results apply to British males). If their eyes light up, their hand involuntarily starts to shake imaginary dice, and they start mumbling phrases like ‘Turn to page 245 to fight the ogre’, they are children of the 1980s whose parents never bought them a Spectrum or Nintendo.

Anything along the lines of, ‘Wot, like Resident Evil?’ and they are either too rich, too young, or too unimaginative to care. I pity them.