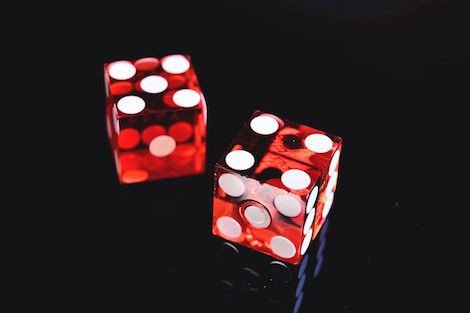 True story: no one likes playing word games with me. When I make the suggestion of playing Scrabble or, my favorite, Bananagrams, I see the eye rolls and sighs.

You see, I grew up in a household where playing word games like those were the norm. Thanksgiving and Christmas gatherings or weekends at home now can involve hours of playing Scrabble, debating the viability of certain words, and pulling out some Very Old, Very Classic word games like Probe to nerd out. My family owns multiple Scrabble dictionaries.

(Let us note that one of the poor experiences my husband had while joining in Family Word Games was misspelling a word and never, ever living it down).

For word nerds, here’s a round-up of games that will make your suggestion of playing a fun game one met with sighs and eye rolls, too. Or, you know, help you make some new word nerds who appreciate language and games as much as you. Some of these you’ll be familiar with, but others are likely to be new ones in your repertoire. 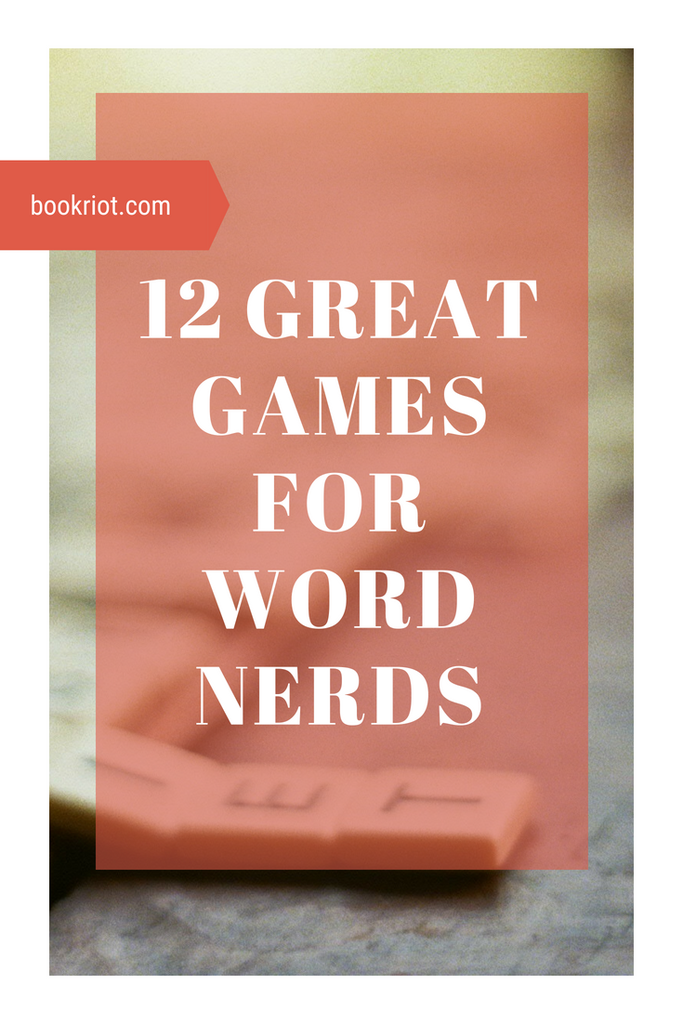 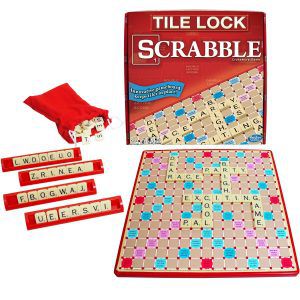 No need to really explain Scrabble a whole lot, since it’s been a staple board game since 1930. The object is to create words with the letters on your rack and score the highest number of words.

Pro tip: get yourself a Scrabble dictionary and memorize all of the legal words you can use that are short and make use of high-scoring, challenging-to-use letters. According to the rules, you can’t use it while playing the game, but there’s nothing against a little pre-game reading to prepare for the inevitable rack of letters where you have a Q and no U.

I also recommend snagging one of the fancy boards that has tile locks and a swiveling base. 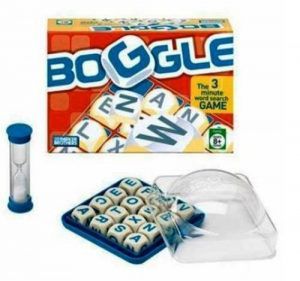 Were you someone who absolutely killed it when you did word searches? Then if you haven’t already dominated at Boggle, you should prepare yourself for nonstop victory.

Made by the same folks as Scrabble, this one takes word making in a different direction. The dice each have letters on them, and when the cube of dice is shaken, a timer is flipped, and all players scramble to make the most words possible. The winner is the one who finds the most words with the highest point values (which are longer words). 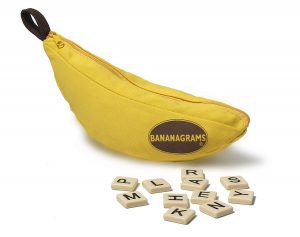 I’ve been told that this game is banned from our home because I am too good at it. Of course, it also happens to be my favorite game.

Bananagrams is an almost perfect mix of Scrabble and Boggle. Letters are laid out upside down and players each take a set amount at the start of the game. The goal is to then build a personal crossword puzzle from those letters until you run out—then you shout “peel” and everyone must grab more letters. You can, of course, dump a crummy letter, but the “reward” for that is choosing three new tiles as a replacement. The winner is the one who runs out of letters first.

Bananagrams has spread to include a few more word games, too. While I’m not as familiar with them, other variations include Word-A-Melon (a word search game), Pairs in Pears (a word pairing game), and Appleletters (like Bananagrams, but for making longer words and angled at younger players). 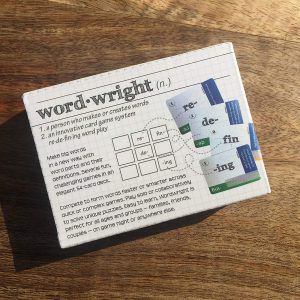 This one is the perfect game if you suffered through things like Word Wealth in high school. Based on building words from root words, the goal in Wordwright is to develop longer and longer words. This Kickstarter game is now available more widely, and while I’m not familiar with it personally, the reviews for it are great. It utilizes 54 cards to word building, tossing aside the idea of tiles or dice all together.

One perk of this game is you can play it solo or with a group of other people. Perfect for those who are told they’re no longer allowed to play word games with others because it’s just not fair. 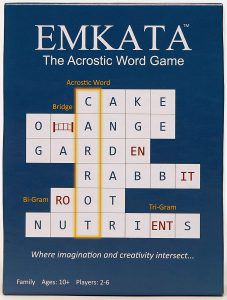 Short on time? Emkata is the word game for those who want their fun to come in quick bursts. Built in three 5-minute rounds—for a 15-minute total game play—the game’s objective is to build acrostics in strategic ways. You play one-on-one or in teams. Each team selects a category card  from the deck, and they assign a word from that category to the other team (categories are things like sports, with words like gymnastics, soccer, volleyball, etc.). That word becomes the first word in the acrostic.

Then, the timer is set for five minutes and each team tries to develop additional words related to the first one with their letters. There are some letters which are worth more points than others and some which deduct points. The winning team is the one who, after three rounds, has racked up the highest value. This is a clever twist on Bananagrams meets Scrabble, with the layering of categories on top. 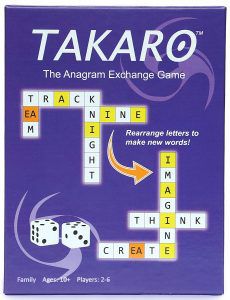 Need a game that goes even more quickly? Takaro is your winner, as it clocks in at only two five-minute rounds.

At the start of round one, each team takes ten tiles that can be a combination of consonants and vowels. Then there is a dice roll and decision for how many additional tiles to take. When the timer begins, the teams race to spell as many words as they can with their tiles; some of those tiles, of course, bring with them extra points.

It sounds a lot like Bananagrams until this part: after round one, the teams switch their hands with one another and must come up with words that were not already used from those same hands. The team which scores the highest wins. 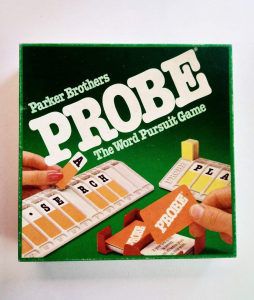 This oldie but goody is one of my family’s favorites and could be called something akin to Hangman. This one is for two to four players, and each player gets their own tray full of letters, as well as dots. Keeping those letters and dots private from other players, each person comes up with a word they want to make other people guess. The letters for the word are each assigned a value on the tray, making placement of the word and use of dots (which are blank letters) part of the challenge when it comes to guessing the words other players have created.

Game play involves asking a player if they have a particular letter. If they do, the letter is revealed and the guesser gets to continue asking. If they do not have the letter, the game play moves on to the next player. There are additional gameplay cards to add some more stakes to the game, and perhaps one of the most enjoyable elements is that any player at any time can interrupt the playing and guess the full word of another player (amassing a nice point value if they get it right and steep penalty if they do not).

Pro tip: spelling your words correctly is important in this one. 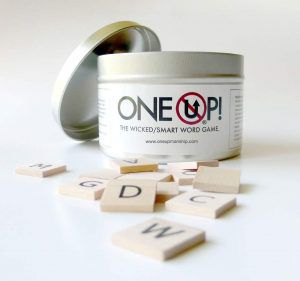 The appeal for this game is this: you get to steal stuff and it’s part of the game.

There’s a common pool of letters, from which teams make words. The team which makes a word gets to keep those letters and that word on their side, but at any time, if another team can use the pooled letters in conjunction with the word already made, they get to steal the letters. Think: if a team made “art” and an “s” and “m” came up, the other team could call “smart” and take all the letters.

Bonus: you can get a free download of the game if you don’t want to buy a copy. 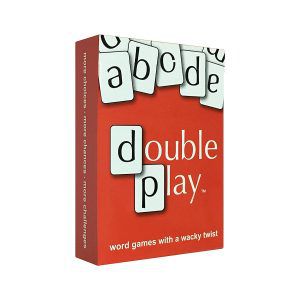 Here’s a word game you can play alone or with other people and it comes as a deck of cards, making it easy to tote around. The twist with this game is that the deck of 50 letter cards is reversible, wherein each letter becomes a different letter with a different score value when it’s simply turned around.

There are four different games you can play with the single deck, with names like “The Final Word,” “Finders Stealers,” “Word Wars,” and Solitaire Dare. 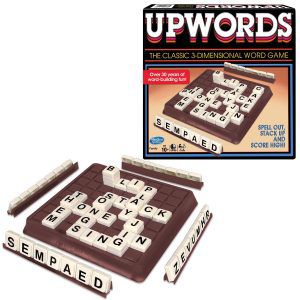 Along with Probe, Upwords is another favorite in my family for our holiday game playing. I like to think of it like Scrabble—you have a board and set of letter tiles—but instead of playing in rows, you get to play this one in rows and in three dimensions.

Players each get a set of letters and make words, but letters can be stacked on top of other ones to form those words, so long as it works for any intersecting words.

If the word “flap” is on the board but you have the letters “s” and “i” in your control, you could pop the “s” on top of the “f” and the “i” on top of the “a” to make “slip.” It’s a fun and creative way to change how you think about the way words are made by simple letter swapping. 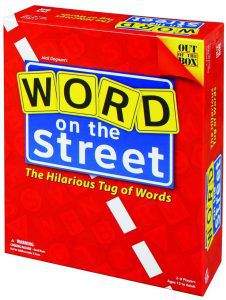 Word On The Street

The next time I’m in the market for a new word game, I suspect this is going to be my choice, since the descriptions of this one make it sound way too fun. There is a junior version of this game which is set up a little different, so if you have young ones, you can try that version out with them.

The game board is set up with 17 consonants lining up down the center with letters like j, q, x, and z not included. This is the “median” of the street. On each turn, a team is presented with a category and they have thirty seconds to come up with a word related to that category and move the letters of that word from the median to their side of the board; when a letter moves off the board, they get to keep it. The first team to collect eight letters is the winner.

Here’s an example: the category is kitchen utensils. A team might choose “spatula,” and they’d move the letters starting with s out from the median, S-P-T-L (since there are no vowels).

The combination of board game + word association + creative spelling is weird and yet utterly appealing. 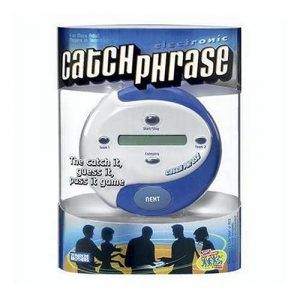 One of my favorite things in high school was heading to my friend’s house on a Friday or Saturday night, eating pizza, and playing a wickedly intense game of Catch Phrase. We tried both the board version and then, when it came out, the electronic and declared both to be equally excellent.

Catch Phrase is essentially charades, but with words (or maybe another way to describe it is like the Pyramid Game Show from back in the day). Players pass the device back and forth and try to get their partner or teammates to correctly guess the word or phrase before it gets passed on. The goal is to reach seven points first.

This is a timed game, so it rewards those who are great at word association on the fly. There are also various themed versions of the game, so if you want to test your knowledge of words and language and pop culture from, say, certain decades, you can. There are also Star Wars, Music, and classic editions.

This is obviously not a comprehensive round-up of games of word nerds, so I’d love to know: what are your favorites? Tell me why we should check them out in the comments!

Want more? Check out these great bookish puzzles, fun bookish Monopoly boards throughout the years, and these fun bookish board games.