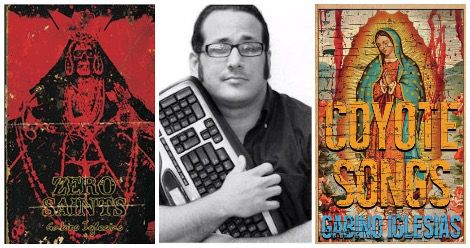 Few indie writers get to coin their own genre. But when you have a presence as large as Gabino Iglesias, you look at the lit world and say, “I write barrio noir.” And the lit world responds, “Yes, sir, you do.” So we sat down with Gabino to talk about his new book, Coyote Songs, and how his barrio noir is leading an influx of great indie lit about the immigrant experience.

Gabino on the Hustle

Book Riot: No one I know hustles quite as hard as Gabino Iglesias. While you work a full-time job as a teacher, you also churn out a constant stream of online content, just released novel number four, and somewhere along the way picked up a PhD. So can you look back on your life and pinpoint where that kind of drive comes from?

Gabino Iglesias: Thanks for the kind words, man. They mean a lot coming from a writer whose hustle and talent I respect. 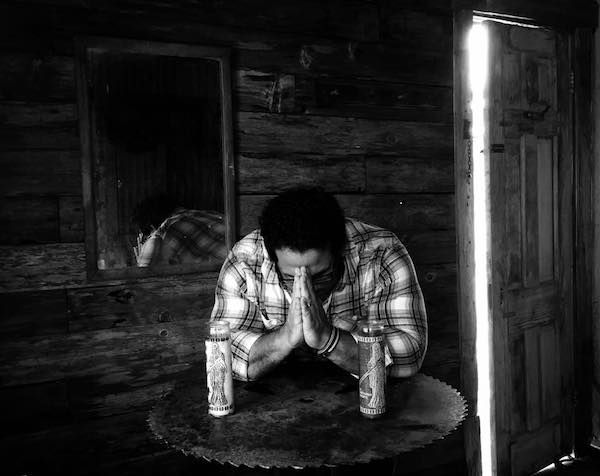 To be honest, I think it was a gradual thing. I can’t pinpoint a specific time, but I can recognize moments where I thought about what I wanted to do and what it’d take.

In high school, one of the school’s counselors met with me and told me to aim low and local. She thought my English skills would never be enough to go to a university in the U.S. She felt my grades reflected a lazy personality. I was doing my own thing. Reading. Writing. Playing guitar. Kayaking. Partying. However, I knew she was wrong. I spent hours reading Poe and Lovecraft. They taught me new words. My English was better than my teachers’, but my grades didn’t reflect that. I guess she was wrong. The next time I see her, I’ll ask her to call me Dr. Iglesias and then tell her to go buy my books!

In any case, I also used to get angry when people said “Remember, there’s always someone working harder than you!” Nah. I’m gonna get up earlier, work harder, and out-hustle myself every day. It’s about me, not what anyone else is doing. I can’t control what others do, but my hours are mine. My energy is mine. I will invest it in building things that make me happy, that bring me joy, things that I think matter. I’ll review every book I can. And I’ll blurb whatever I can. I’ll write every intro I’m asked to. And I’ll retweet and write about diversity in publishing, and do readings, and keep going harder every day.

No one should care about my work more than me, and working is a great way of showing how much we care about something. I teach high school, come home, and teach at SNHU’s online MFA program. That pays the bills. The day gig pays my insurance, which I didn’t have for almost five years (shout out to every dealer out there who has ever hooked anyone up with antibiotics. Y’all are heroes). The rest is passion. Things I feel passionate about. I do them because they make me happy.

Gabino on the New Book

Writing a Mosaic Blend of Genres 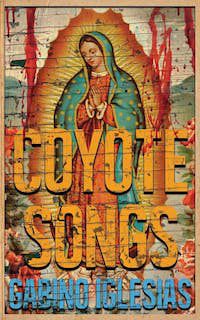 Book Riot: Can you talk a little bit about the mosaic approach? With Zero Saints, we saw more of a central driving crime fiction plot line, of sorts. But with Coyote Songs, while there are central themes and emotions, the stories are episodic. So what went into that choice for you?

Gabino Iglesias: The stories about la frontera are endless. I spent nine months teaching ESL courses to mostly undocumented workers. Most of them had crossed the border illegally. They had stories to tell, and I heard them all. But I couldn’t touch them, couldn’t use them in my work. They were sacred. They lived in me but didn’t belong to me.

The idea of a mosaic appealed to me because it’d allow me to have a plethora of shoulders on which to place the weight of something as big as pain, migration, suffering, justice, bilingualism, multiculturalism, and syncretism. It seemed like the only way to go with Coyote Songs. 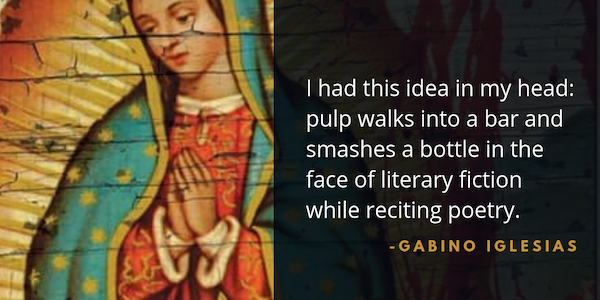 Also, I had this idea in my head: pulp walks into a bar and smashes a bottle in the face of literary fiction while reciting poetry. There is no reason why those things should be kept separate. They can easily occupy the same space, and I thought a variety of voices and situations would allow me to try to flex some writing muscles. A line of poetry here and a bloody machete there; it all belongs together, and a mosaic makes the process easier. I write horror and bizarro and crime and then call it barrio noir because it’s easier to call it a single thing, but nothing nowadays is a single thing. Mixing genres isn’t the future; it’s the present. There’s guns in my work, but also magic and ghosts. A mosaic, this time around, offered the space and freedom I wanted.

Book Riot: You write within this swirling vortex of a love and hate and anger and passion and vengeance and blood. But one of the aspects of your writing I am most impressed with is the sense of control. So how do you keep yourself and the reader and the characters from just sliding into an emotional pit of one kind or another?

Gabino Iglesias: Not easily! Haha. I’ve always had a bit of an anger issue. In seventh grade I was a chubby kid with glasses who liked books. I got picked on by bigger kids. I learned to love violence. And I learned to hate bullies and all types of abuse. I once saw a bully urinate on a girl with Down Syndrome. I broke his right arm. My mom forced me to write him a card apologizing. I’m still proud of that. I have worked on keeping my cool for years now. Bad things happen if you spend your life answering with your fists. For example, I’m called a spic or a beaner online every couple months. I let it slide. I got work to do. Some online troll won’t get time he doesn’t deserve. Sometimes I even forget about it.

I try to make my characters believable, and that ebb and flow is part of our humanity. At one point I flirted with the idea of titling this new book The Dissolution of Absolutes. You know how it is: you are convinced a course of action is the right one on Monday and nothing will change your mind. Then Wednesday rolls around and you realize your anger had blinded you. There’s a better option. A smarter option, maybe.

Most of our ideas change. Not the core ones. I will always loathe racism, bigotry, misogyny, and all kinds of abuse and bullying. However, the guy whose teeth I want to knock down his throat on Monday is just a sour bigot with 70 followers on Twitter on Tuesday, and I don’t have time for irrelevant people. If they really cared that much about insulting me, they’d come out to a reading.

Book Riot: This is a politically motivated novel. But what from our current political climate most inspired you?

Gabino Iglesias: Migration has always been a huge deal, but the framing has changed. It’s all fear and hatred now. Racists feel emboldened. Fear of the Other is as high as it’s always been, and now folks feel the people running the country are on their side. 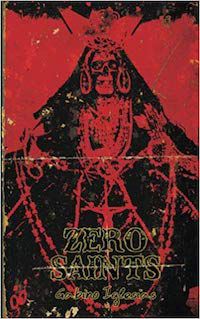 Well, I started paying attention to these stories with Zero Saints four years ago, continued doing so with Coyote Songs, and will keep doing it until I can’t type anymore.

The ridiculous idea of white supremacy…oh, man. Long live diversity, multiculturalism, migration, change, and complicated herstories. I want my fiction to entertain, but also to show you things you normally don’t see. “Oh, the evil migrants are coming!” Stop. Think really hard about it: why would you leave home, country, family, and friends behind? No one is coming for your job. Migrants, like me and like those crossing the border every night, are only looking for something better, for an opportunity, for a way to protect and feed their kids.

Book Riot: So, like you reference, Coyote Songs is very much about the immigrant experience. And we know much douchebaggery has been made about the dangers of allowing immigrants to seek asylum or simply opportunity in our country (which…I think…we used to call the Land of Opportunity…I didn’t dream that, did I?).

So let’s talk a little about all the good lit we know immigrants bring to our country. I recently read The Gringo Champion by Aura Xilonen (translation by Andrea Rosenberg). But no one’s as well-read as Gabino Iglesias. So let’s get it. Give me some books and writers who are either writing about and/or from the immigrant experience.

Gabino Iglesias: Yeah, this is the Land of Opportunity. It’s just hidden for a while, but it’s still there. In any case, hell yeah! Folks need to read everything written by David Bowles, especially his latest book of poems, They Call Me Güero: A Border Kid’s Poems.

The same goes for Rios de la Luz’s Itzá and everything ever written by Yuri Herrera, especially Signs Preceding the End of the World.

Also, read Edward Vidaurre’s Chicano Blood Transfusion and Valeria Luiselli’s Tell Me How It Ends: An Essay in 40 Questions.

And go read Daniel García Ordaz’s Cenzontle/Mockingbird: Songs of Empowerment and anything Pedro Pietri ever published.

And then read the book that explains it all, Gloria Anzaldúa’s Borderlands/La Frontera: The New Mestiza. Read The Cowboy Bible and Other Stories by Carlos Velázquez and Carlos Fuentes’s The Crystal Frontier.

As soon as you open the doors to outsider fiction, you’ll start discovering the many treasures it contains. Don’t be afraid to read widely and outside of your comfort zone. That’s where the hidden gems are waiting. Read as much as you can about the experiences of migrants across the globe. They share something while also being unique. And stop looking at migration as a bad thing. Especially in a country built by migrants. Unless you’re Blackfeet, Iroquois, Choctaw, Pawnee, Comanche, Sioux, or Apache, your bloodline is tied to a boat. Embrace that and move on.

Gabino on What’s Next

Book Riot: Is there a book in the works? I know you’re judging the Shirley Jackson Award for horror, but I most want to know about possible returns to some barrio noir.

Gabino Iglesias: Barrio noir is what I do and what I will keep on doing. I’m always working on the next thing. I’m returning to those dark spaces, and even going underground. The next novel will explore the ties between folks hustling here and those on the other side. Drugs move a lot of money and money moves people. I hope to have it finished by the end of the year. Three years went by between Zero Saints and Coyote Songs. I don’t want to wait that long again.

And yes, I’m very excited about the Shirley Jackson Awards. It’s an incredible opportunity that’s exposing me to writers I wouldn’t have read otherwise, so I’m enjoying every minute and every page.

In the meantime, I will work on getting Coyote Songs in front of as many eyes as possible while keeping my reviewing focus on women, POC, members of the LGBTQ community, work in translation, Native Americans, and Appalachian authors. Indie lit for life, baby.