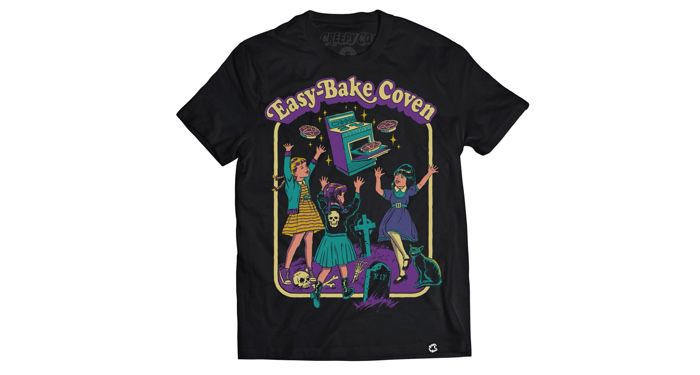 As a lifelong book nerd whose very bookishness is a core part of her identity, I love to wear bookish shirts. You know. Just so everyone around me is aware that “I’d rather be reading.” So it stands to reason that, as horror is my favorite genre, funny horror T-shirts would also be my jam.

Personally, I love wearing my horror apparel year-round. My Terrorvision top, for example, has served me well in a wide range of situations, from teaching yoga to running a horror-themed book club at New York Comic Con. But as October creeps closer, ads for spoopy fashion and accessories are popping up in my inbox and social media feeds even more. And I am HERE FOR IT.

Because one can never have too many funny horror T-shirts, I thought I’d share some of my recent faves. Just remember: horror is always in season, so you should probably stock up.

This homage to Mary Shelley’s Frankenstein amuses me. For $20 at Snorg Tees, you can get a shirt that perfectly encapsulates all the angst one must feel when their name is consistently erased in favor of that of their partner creator. And if you’re a fan of Frankenstein and his monster, might I recommend that you also read Victor LaValle’s Destroyer?

I was fairly young when I saw the film The Exorcist (what were my parents thinking!?), a movie based on the book by William Peter Blatty. I read The Exorcist soon after. But what I truly love about this funny horror T-shirt ($24.95+ on Etsy) is the way it also references the 1990 film Repossessed, a comic film that parodies the original. Please tell me you’ve seen it.

When I was young and watching all of the eleventy-billion Hellraiser films (again, what were my parents thinking?), I didn’t realize they were based upon The Hellbound Heart, a horror novella by Clive Barker. I love it when films end up being literary! Anyway, this funny horror T-shirt from Redbubble, with its image of the Lament Configuration upon it (that puzzle box that creates a bridge to a terrifying dimension) plays into my love of childhood nostalgia with its cheeky reference to the Bop It line of toys.

It should come as a surprise to no one that I devoured the Scary Stories to Tell in the Dark series when I was young. I can still vividly remember Alvin Schwartz’s short story “Burning Feet,” with its references to “The Wendigo.” This shirt ($12.99 at FiveFingerTees), which features one of Stephen Gammell’s terrifying illustrations, says it all.

I snorted upon seeing this shirt ($12.99 at FiveFingerTees). Who doesn’t love a good pun? As for the Kraken—a massive (and fictional) sea creature—it’s appeared in many pieces of literature over the years, from an 1830 sonnet by Alfred Tennyson to Jules Verne’s Twenty Thousand Leagues Under the Sea to a children’s book by Eva Ibbotson called Monster Mission.

Too soon? I mean, the summer of “freaking nothing” has barely ended and COVID is still going strong. But this T-shirt from Etsy seller ElaineRoseCreations ($18.99+) is still clever. Wondering how this shirt is bookish? You may not know this, but the popular ’90s film was loosely based on the 1973 novel by Lois Duncan.

I know we’re supposed to be talking about T-shirts, but this particular Poe pun seems to beg for long sleeves (though a quick Google search will yield T-shirts and tank tops emblazoned with the same phrase). Get yourself this slouchy sweatshirt from Zulily for $24.99.

This funny horror T-shirt ($26.99 at Creepy Co.) doesn’t reference any particular work of horror fiction, but I can’t resist the pun or the retro style. Besides, covens have appeared in many works of literature, from Anne Rice’s The Vampire Chronicles to Stephenie Meyer’s Twilight series to the Chilling Adventures of Sabrina.

The Necronomicon—also referred to as the Book of the Dead—was created by H.P. Lovecraft, who is problematic as hell. But we love how other authors have taken inspiration from his work and made it their own (most recently and visibly with Lovecraft Country). As for this shirt ($12.99 from FiveFingerTees), the manically happy declaration that “Reading is fun!” juxtaposed against the angry face on the Necronomicon makes me crack up.

At the same time, you can’t argue with the sentiment that books are magic. Get this shirt from TeeFury. Prices vary depending upon the style.

Finally, I wanted to share my latest acquisition from my favorite geek apparel company, Jordandené. I love how it takes a frustrating fictional trope and turns it on its head to that its wearer can declare her love of horror to all. This tank top ($30) is also available as a T-shirt.

And if you prefer your horror apparel to be less silly, I’d like to give a shout out to Out of Print’s line of Penguin Horror Series pieces.