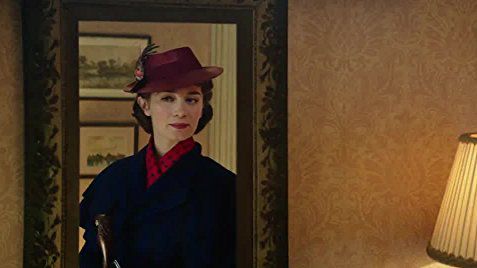 Alright everyone, grab your kites or your parrot-headed umbrellas. Spit spot! This is very much not a drill. We now have a full-length trailer for this Christmas season’s highly anticipated Mary Poppins Returns.

Did you ask Santa for a stocking full of nostalgia? Because I sure did.

Good Morning America released the trailer this morning on their twitter page (the perks of being part of the ABC family!):

And Mary Poppins Returns star Lin-Manuel Miranda was quick to hop on the news:

The Mary Poppins returns full trailer, as I live and breathe… #MaryPoppinsReturns https://t.co/j0zSlZaHC9

I think he’s more excited than any of us! Why not? That “horrible” cockney accent Miranda threatened us with on his Twitter page (back when his role was first announced) doesn’t sound half bad! And, going off the brightly-colored trailer, which both hearkens back to the original film and promises new, magical adventures, he must have had a ball filming what is sure to be an absolute romp of a film.

Check out the trailer here on the Walt Disney Studios YouTube channel:

The new trailer introduces us to Jane (Emily Mortimer) and Michael Banks (Ben Whishaw) all grown up, still living in the house on Cherry Tree Lane, and apparently in trouble both emotionally and financially. Thank goodness Mary Poppins (Emily Blunt, looking every inch her part) has a “practically perfect” sense of timing.

The cast is star studded (in the trailer alone we see cameos from Angela Lansbury, Meryl Streep, Colin Firth, Julie Walters, and the ever-delightful Dick Van Dyke), the film looks beautiful, and I don’t know about you but I am wildly excited for the promise of massive, technicolor, chalk-world musical numbers.

Mary Poppins Returns will be descending gracefully into theaters on December 19th.