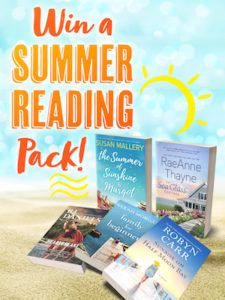 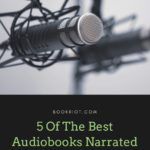 When I was a young bookworm obsessed with books on tape, I thought there was nothing better than an audiobook featuring a full cast. With a full cast, each character is voiced by a different actor, with a separate actor for the narrative, giving stories a radio drama-like feel. A more recent version of this type of production happens when multiple narrators combine their talents to voice the different viewpoint characters in a novel. I adore both kinds of full cast audiobooks, so here are a few of my favorites! 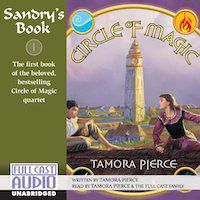 As a young teen, I adored Tamora Pierce. Never before had I seen girls and women in charge of their own fates. They saved the day as lady knights, spy masters, and demi-goddesses. Even though I owned the print editions of every novel Pierce had ever written, the audiobooks were my favorite because they were narrated by the amazing talent at Full Cast Audio. Pierce’s Circle of Magic Quartet, which starts with Sandry’s Book, stands as my all-time favorite series from Full Cast Audio. In the series, four children, each with unique magical powers, find a home at a magic school where they form a special found family of their own. I listened to the series over and over, never getting tired of the beautiful world Pierce created. Though I’ve listened to many full-cast productions since then, for me, Full Cast Audio was the company that started it all. 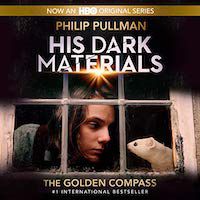 The Golden Compass by Philip Pullman, Narrated by the Author and a Full Cast

Back in the day when Audible wasn’t owned by Amazon and let you burn CDs of your audiobooks, my collection of the His Dark Materials series was one of my most treasured possessions, and it is still my favorite children’s series of all time. The first book, The Golden Compass (known as The Northern Lights in the UK), introduces us to Lyra, a spunky orphan girl living as a half-feral ward of the scholars of Jordan College in Oxford. In this alternate version of our own earth, magical things are still possible: a kingdom of armored polar bears rules the North, clans of witches inhabit the night skies, and academics seek to discover the possibilities of other worlds. I can’t tell you much more without getting into spoilers, but the fact that I have re-listened to this series countless times speaks for itself. 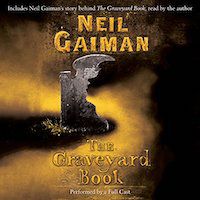 The Graveyard Book by Neil Gaiman, Narrated by the Author and a Full Cast

As a huge champion of audiobooks, Neil Gaiman will always hold a special place in my heart. He even went back and re-produced some of his past books to include a full cast. One of those titles is the Newbery Medal–winning children’s novel The Graveyard Book. This story follows Nobody “Bod” Owens, a young orphaned boy who is being raised by ghosts. Throughout the story, we meet a wide range of spooky characters, but Bod always feels at home. But beyond the graveyard lurks the dangerous man who killed Bod’s family and wants to finish the job. The full-cast narration adds to the spooky qualities of the story, making The Graveyard Book the perfect audiobook for adults and kiddos alike. 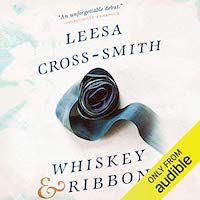 In adult fiction, most of the full cast audiobooks I’ve listened to will use a different narrator for the different viewpoint characters of the novel. While this doesn’t give listeners the radio drama feel, it’s still a very useful way to draw listeners into the stories. Whiskey & Ribbons by Leesa Cross-Smith uses this strategy so well. Evi, a ballerina, loses her husband Eamon when he’s shot in the line of duty as a police officer. Eamon’s brother Dalton stays with Evi after her son is born, helping to care for Evi in her time of mourning. But Evi and Dalton soon realize that their love for each other is more than familial, platonic affection. 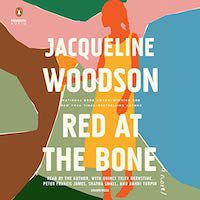 Red at the Bone by Jacqueline Woodson, Narrated by the Author and a Full Cast

In my favorite audiobook of 2019, Jacqueline Woodson and a full cast narrate this multi-perspective story about a family. A young girl is being cared for by her grandparents and struggles to come to terms with her emotions about her strained relationship with her parents. From there, each chapter jumps to a different character’s perspective which has its own narrator. Red at the Bone is beautifully produced, and I was glued to my seat as I listened to this engrossing audiobook.