I’ve had a lot of time to think lately. Like many of you, I’m not a huge fan of too much mental downtime, and as this whole shelter-in-place things has stretched into its next month I’ve felt an increasing need to fill some of the empty spots between my ears. I’ve done so, at least in part, by giving myself little challenges that feel productive, if only to me. I’ve improved my bread baking skills. I’ve taken on knitting projects for which I had to lean new stitches. I made my first soufflé. I wrote a horror novella.

Since we’re all (rightfully) very much in our feelings at the moment, let’s keep going with Emotions.

Trung Le Nguyen’s The Magic Fish (Random House Graphic, 10/13) is many things: a European fairy tale; a Vietnamese one; an immigration story; and a raw, beautiful coming out narrative, all woven into the fabric of 13-year-old Tiêń’s life. There’s so much for Tiêń to consider as he travels the pages of this gorgeous graphic novel: his mother’s flight from her home, her quest to to become an American, his grandmother’s death on the other side of the world, his connection to his roots, how to reconcile his Catholic upbringing with his queer sexuality, and how to explain everything rattling around in his head to the parent he loves so much but with whom he doesn’t share enough vocabulary to describe what he doesn’t fully understand himself. Kids are so much smarter, and so much more complex and conflicted, than many adults give them credit for; sharing Nguyen’s book with them won’t only help them figure out how to approach you but will remind you how vast their emotional lives are and how badly they need you to know how to listen.

It’s always lovely when a book manages to be both delightful and full of teachable moments, rare alchemy indeed when a single title succeeds at both. Beetle and the Hollowbones by Aliza Lane (Simon and Schuster Children’s, 8/4) is one of those very special creations. An absolutely enchanting story about the reunion of long lost friends Beetle and Kat Hollowbones, plus their adorable third, Blob Ghost, who haunts the mall Kat’s aunt wants to tear down, Lane doesn’t shy away from taking the time to explore her characters’ personalities, individuality, and flat out weirdness. And, as we like to say in my house, “weird is awesome.” No one is exactly who they seem in this modern goblin versus undead fable, which, in my opinion, is exactly how things should be. Especially when the biggest badass in the cottage is the stout little grandma in the pointy hat.

Always put your money on grandma. 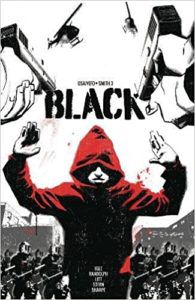 In a world that already hates and fears Black people, how does the populace react when it turns out only they have superpowers? How, Kwanza Osajyefo asks in BLACK, is Kareem supposed to feel, to react, when he discovers after surviving a police shooting that he is one of these “empowered” individuals who have been around for centuries but who operate in secret because, once the government finds them, the empowered never have autonomy again?

He is very angry.

His fellow empowered are angry.

And they decide to fight.

In this house, we’re always excited when a new Avatar: The Last Airbender comic drops, and I am 100% certain that the arrival of Katara and the Pirate’s Silver by Faith Erin Hicks, Peter Wartman, Adela Matera, and Jimmy Betancort (Dark Horse, 10/3) will be cause for much celebration. Katara is most often the softest member of Team Avatar, the caregiver, the den mother, and I mean that as the highest possible compliment (I mean, can you imagine trying to keep Sokka, Aang, and Momo hydrated and on task?). It will, however, be not only fun but intensely gratifying to watch her take on a solo mission that requires the butt-kicking and name-taking we know she’s capable of (remember when she kicked Zuko’s ass?), as well as a hearty buckling of swashes.

Ryuko (Eldo Yoshimizu, Titan Books) fears no gangster, no dictator, and no getaway vehicle. She, in fact, is the one they (and by they, I mean everyone) should  be afraid of, especially when she has a blade or a gun or a toothpick in her hand. As a member of the Yakuza there’s nothing Ryuko can’t handle…at least until she starts investigating her mother’s death.

Next time, we’ll be wrapping up A–Z emotions. Where to next? I have some ideas, but if there are any categories you’d like to see us take on, let us know @BookRiot on Twitter!