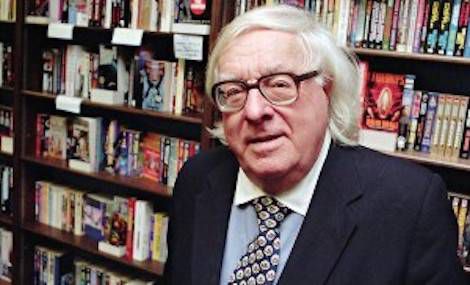 Maybe it’s out of season to talk about Ray Bradbury. But maybe Ray Bradbury is always in season. I mean, do his books taste their best in autumn? Yes, of course—when our wonder has moldered to cider and it’s chilly enough to wrap up in the thickest, wooliest nostalgia you can find, he just hits the spot. But now isn’t a bad time, either.

Sometimes bumping into people out of context, unexpected can be the worst. (See also: being a kid and running into your teacher over summer vacation—how do you act? Why are they loose? So many questions!) This is not the case with Ray Bradbury. No way. Not even close. His company is always a pleasant surprise.

While I hate to ruin surprises, here are four places you might find yourself in his presence, sometimes peripherally, sometimes looking him right in the bespectacled eye.

Star Trek (aka “Star Track”, as my grandma called it)

Too obvious? Maybe. He and Gene Roddenberry, the fella who dreamed the franchise up, were pals who sat at the same midcentury science fiction table in the cafeteria. Bradbury famously loved all things space and rocket related, and it is fitting that he gets a couple of nods as the namesake of a Federation star ship. In the saucily-named episode of Star Trek: The Next Generation “Menage a Troi”, for instance, which ship is bestowed the great honor of relieving the pain of fandom everywhere by arriving to whisk away Wesley Crusher to Starfleet Academy? The U.S.S. Bradbury, the first of its class.

Wesley missed the space bus by saving the day in that episode, much to the chagrin of a large swath of viewers at home who were sick of having a kid on the Bridge. (Wil Wheaton, I was cheering for you. Please know that.) (Mostly because I kept hoping Wesley would scream TRAAAAIIIIIN in slow motion, which as far I know never happened.)

When J.J. Abrams rebooted the classic cast in his films, the U.S.S. Bradbury is once again name dropped as the characters discuss their ship assignments. Is it subtle? Nope. Is that okay? Yep.

Somewhere between Wet Seal and the remote controlled helicopter kiosk, you will find the spirit of old Ray. In his collection of essays with the perfectly Bradburian title Yestermorrow , he meditates on his vision for a town square that harkens back to America’s quant old villages where folks can amble languidly under lamplight in his essay “The Girls Walk This Way; The Boys Walk That Way.” He spells out and plans a modern way to capture the spirit of meandering urban togetherness in a way that looks lovingly at both the past and the future in that way of his. Did he inspire the layout of contemporary shopping malls? He certainly believed he did. I will be the last person to argue.

If there is word that more perfectly captures the essence of Ray Bradbury than Yestermorrow, that word is “Imagineer”. The Walt Disney company gets credit for coining it, but Bradbury gets some of the credit for bringing to life Epcot Center’s most recognizable attraction, Space Ship Earth. Disney consulted Ray on the design, story, and narration when they were building the ride. It’s a temple to wonder and human achievement, and I daresay it is golf ball shaped perfection.

Ray Bradbury never owned a divers license—on Earth, that is. It’s true. But when NASA had landed a remote controlled rover on our red neighbor, you have probably already guessed who they invited to take it out for a spin. The person who had gazed at Mars for most of his life, populating it in his fantasies with dark and golden-eyed women and men and more than a few travelers from Earth, deserved to be behind that wheel. I don’t think anyone would dispute that. As a token, NASA gifted Bradbury with a Martian license to operate a moving vehicle, since he more than likely inspired at least one of those scientists to help push us into space. So when you yourself gaze at the red speck rising in the night sky, know that Ray Bradbury has left his marks on it in the shape of tire treads in the dust.

There is a metaphor there that even Ray Bradbury would find heavy-handed. So sue me.