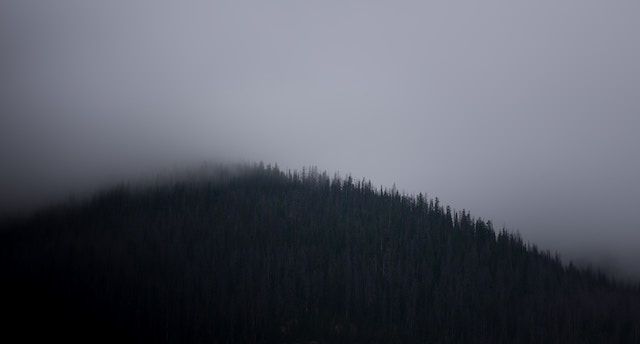 Growing up, I was never afraid of the typical things that scared other kids, like nonexistent monsters. In preschool, I abruptly stopped watching Thomas the Tank Engine when a character stuck their tongue out at a painting—and the figure in the painting stuck its tongue out in return. On my first trip to Disney World at age four, I tolerated the singing birds in the Tiki Room but freaked out when the walls started singing. At age six, I was horrified to find a duplicate of my favorite teddy bear—just as worn as the “real” one—hidden in a closet.

I couldn’t imagine that anyone else could find these things frightening or experience ineffable horror because something was slightly off. All of these stories, which sound amusing in retrospect, were horrifying at the time and shaped my imagination. I developed a lifelong fascination with doppelgängers.

What do all of these seemingly random, bizarre incidents have in common? They challenged what I thought I understood about the world. They made something familiar and natural its opposite.

I didn’t revisit these early memories until I read Freud’s essay The Uncanny in my freshman gothic literature class at Stonehill College in fall 2007. Freud writes that the word “uncanny” is difficult to define but can describe an ineffable feeling of dread or wrongness. Uncanny (unheimlich in German) literally means unfamiliar or not homey.

“Thus heimlich is a word the meaning of which develops in the direction of ambivalence, until it finally coincides with its opposite, unheimlich. Unheimlich is in some way or other a sub-species of Heimlich (4).” In other words, it’s not unfamiliarity itself, but the inability to tell whether something is familiar or unfamiliar, which is so unsettling and threatening. Freud uses anecdotal evidence from literature and his own and patients’ lives to support this idea. Uncertainty can be uncanny, especially when we can’t tell whether someone or something is animate or inanimate. It’s how most people feel when seeing a dead body, and Freud thinks that it’s vestigial, from a time when most of our ancestors believed in ghosts.

Long before I could articulate why, Tchaikovsky’s ballet The Nutcracker always horrified me on a visceral level. I loved most of its elements individually: symphonic music, Christmas, fairytales with princes or princesses. Together, however, these pieces were totally unsettling. Instead of a romance between royals who are close in age, it’s the story of a wooden nutcracker—a child’s toy—that transforms into a prince. He’s the adult love interest in a young girl’s romantic dream. He’s also an inanimate object that transforms into a person.

This eerie, liminal space between right and wrong, comforting and creepy, alive or not, illustrates Freud’s descriptions in “The Uncanny.” While researching the uncanny, I discovered that the author of the original story of The Nutcracker was E.T.A. Hoffman. Freud draws extensively on Hoffman’s other stories to illustrate “The Uncanny.” Although I wasn’t previously aware of this connection, it doesn’t surprise me at all. Hoffman’s stories share common elements, such as ghastly creations that are intended to be magical.

All of this might sound esoteric, but the concept of the uncanny persists under different names throughout our culture. Some people would call unexpectedly seeing a double, like I did with my teddy bear, “a glitch in the Matrix.” Anyone who’s experienced déjà vu remembers the unsettling feeling of being unsure whether something is familiar or unfamiliar. As robots, dolls, and computer animation become increasingly realistic, they also approach the uncanny. This concept is called the uncanny valley.

I became obsessed with the uncanny valley and found websites that plotted modern examples of it on graphs. The graphs formed a bell curve, with the least uncanny phenomena (industrial, non-humanoid robots and “healthy people”) at the extremes. The most uncanny things, including marionette puppets and automata, were found in the middle of the curve. To my horror, other entries right in the middle included “prosthetic limbs,” “disabled people,” and even “the way a physically disabled person moves.” I hope that by 2019 standards (as opposed to 2007), the ableism here is apparent.

Did I always feel unconsciously freaked out by the uncanny because of its connection to ableism? I’m not sure, but from a young age, I was horrified whenever non-disabled people treated me as strange or different. I have cerebral palsy and a distinctive gait. Freud repeatedly uses disability and physical and mental illnesses to illustrate the uncanny. His examples include epilepsy and “dismembered limbs” (14). People with other disabilities have also connected ableism to the uncanny. If we feel repulsed by something or someone, it’s often necessary to examine why and ask whether the root is prejudice.