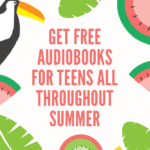 Love YA books? Looking to snag free audiobooks for teens all throughout summer?

SYNC Audiobooks for Teens, a yearly summer audiobook program for teens 13 years old and up, is back in its 11th season to offer free audiobooks weekly beginning April 30 until July 29. Interested participants from all over the world—not just from the U.S.—get two free audiobook downloads per week which they can keep even after the program is over. Anyone (not just teens) who might be interested in young adult audiobooks is welcome to join. 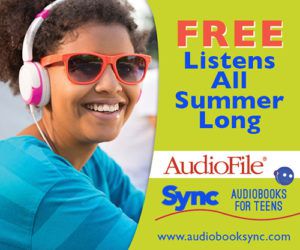 This year, the Sora student reading app, which is different from Libby and the main OverDrive app, will be used to access the audiobook files. Each title will be available for download for seven days during their corresponding weeks. When a new week begins, the previous titles will be gone, so listeners are encouraged to download all of the titles so that they won’t regret missing them.

The 26 audiobooks are mostly backlist—published between 2015 and 2019—with some classics added as well. Interested in checking them out? Here are they:

The 57 Bus: A True Story of Two Teenagers and the Crime That Changed Their Lives by Dashka Slater, narrated by Robin Miles

Picture Us in the Light by Kelly Loy Gilbert, narrated by James Chen

Secret Soldiers by Paul B. Janeczko, narrated by Ron Butler

In Search of Us by Ava Dellaira, narrated by Adenrele Ojo

Like No Other by Una LaMarche, narrated by Phoebe Strole and Leslie Odom Jr.

Into White by Randi Pink, narrated by Adenrele Ojo

Mark of the Raven by Morgan L. Busse, narrated by Jaimee Draper

The Music of What Happens by Bill Konigsberg, narrated by Joel Froomkin and Anthony Ray Perez

The Brontë Plot by Katherine Reay, narrated by Laura Kirman

The Silence Between Us by Alison Gervais, narrated by Chloe Dolandis

Hope Nation by Rose Brock, narrated by a full cast

A Christmas Carol by Charles Dickens, narrated by Alison Larkin

Listeners need to sign up to the newsletter on the program’s website to get alerts each week when the audiobooks are available for access. Listeners can also visit it for instructions on how to set up their Sora accounts before the program begins. Details on how to install Sora can be found on OverDrive’s website.

Launched in 2010, SYNC Audiobooks for Teens is a yearly program sponsored by AudioFile Magazine in partnership with OverDrive and select audiobook publishers. The program wants to demonstrate that “required reading can be completed by listening.”