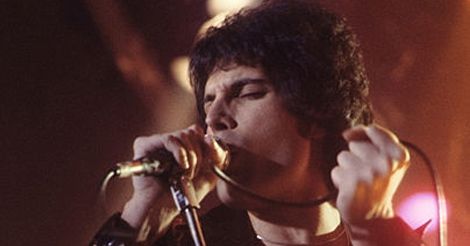 Performing a similar service for Freddie Mercury, Brazilian artist Butcher Billy satisfies the cultural craving for demigods in his immortalization of Freddie Mercury as various heroes like The Hulk, Superman, and Shazam (or “Flash”); a contender for the Iron Throne; and himself: riding on Darth Vader’s shoulders, breaking free in housewife drag, and sporting Bowie’s Aladdin Sane lightning bolt. What are the superpowers of these super-Freddies? The usual smashing, punching, and flying, it seems, but also the essentials of his real-life power—an impossibly big personality, huge stage presence, personal magnetism, and a godlike force of a voice.

I love these all so much I want them to be real!

Abdirahman Moalim first came to the sit-in outside Sudan’s army headquarters in Khartoum to join thousands of his fellow countrymen in calling for Omar al-Bashir to step down as president.

But Moalim, a librarian by profession, saw he could do more.

“I saw most of the protesters were young. At the sit-in, they only had their phones and were reading from it. I then thought what if I bring them books so that they can read and protest at the same time,” Moalim, popularly known as Kabila, told Al Jazeera.

Kabila, who works at the Modern Kabo library in Khartoum, soon realised what books the protesters wanted to read.

Independent Bookstore Day: in some ways, Noëlle Santos couldn’t have picked a better day to officially open the doors to The Lit. Bar, the long-awaited bookstore and wine bar coming to the South Bronx on Saturday.

In October 2014, Barnes & Noble, located in the Bronx’s rapidly gentrifying Mott Haven neighborhood, announced it would close at the end of the year, leaving an entire borough of 1.5 million New Yorkers without a single general-interest bookstore. Now, starting on Saturday, April 27, more than four years after her initial conception, Santos will host a series of free grand opening events and finally launch the only independent general-interest bookstore in the Bronx.