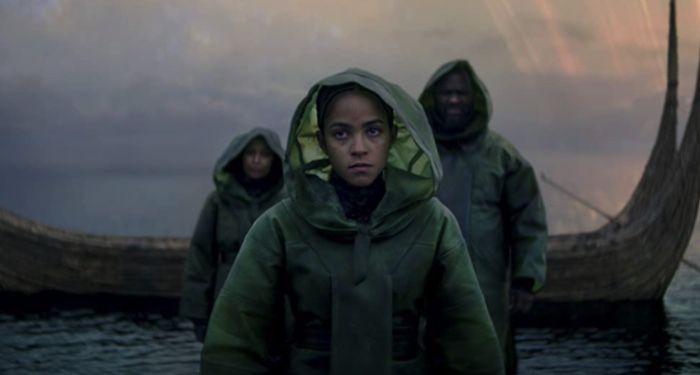 I read Isaac Asimov’s Foundation as a sci-fi obsessed teenager, but I didn’t think I was interested in watching the show adaptation … until I saw the recently released trailer. And now, we need to talk. Go ahead and watch it, I’ll wait!

If I’m being honest, most of my current memory of reading the series is focused on the moment when one character is learning how to make soap from scratch, because obviously civilization cannot survive without hygiene, but also how is it possible that making soap with urine is hygeinic?! The more you know, I guess. I do also remember being obsessed with psychohistory as a possible real thing, and it’s entirely likely that obsession played into my eventual History B.A. and my current obsession with Survivor. But enough reminiscing, let’s talk some specifics.

How faithful the Foundation TV show will be to the original remains to be seen; but in the trailer, we can see that the starting premise is the same. A mathematician named Hari Seldon, using a theory he develops called psychohistory, predicts the end of the Galactic Empire and the collapse of civilization for thousands of years (30,000 in the books, to be precise). The rulers of said Empire do not care for this theory One Bit, thanks very much, and Seldon and his followers become political outcasts at best, potential martyrs at worst. Seldon puts together a team called Foundation to try to save the most important information about civilization, in order to reduce the amount of time it will take humanity to recover from this galactic collapse.

As for characters, the trailer introduces us to Salvor Hardin, played by Leah Harvey (a role genderbent for the show, as the book-character is male), who clearly will play a pivotal role in saving the worlds. We meet Hari Seldon (Jared Harris), and get a look at the Galactic Empire rulers, most particularly Lee Pace playing a character called “Brother Day.” It seems there are three, as opposed to the singular Emperor in the books, possibly because they really wanted to cast a creepy-seeming child actor for effect, possibly also because it makes it much more Roman Empire-y and who doesn’t love a good Caesar reference? (Asimov was in fact influenced by Gibbons’ Decline and Fall of the Roman Empire.)

Otherwise, as trailers are wont to do, we jump around without getting too many other specifics. I am delighted to see many actors of color featured heavily, and look forward (slash, have my fingers crossed) to their story arcs. Other specifics of the books vs. this adaptation will have to wait for the show to come out, and for input from those who remember more than I do. (But seriously! Soap!!) There are seven novels in the series, so there’s lots to draw from if they want to turn it into a long-running juggernaut; I wouldn’t be surprised if we see a season renewal announcement sooner than later, given the way the bonanza of SF/F shows currently in development/airing soon are going.

As far as I’m concerned, I’m perfectly positioned to enjoy the TV show — I have only vague memories, no over-riding attachment to the source material, and a begrudging Apple TV+ subscription. The show begins airing on September 24, 2021.

For those who haven’t already read the Foundation series or much Asimov, here’s a Reading Pathway to get you started!