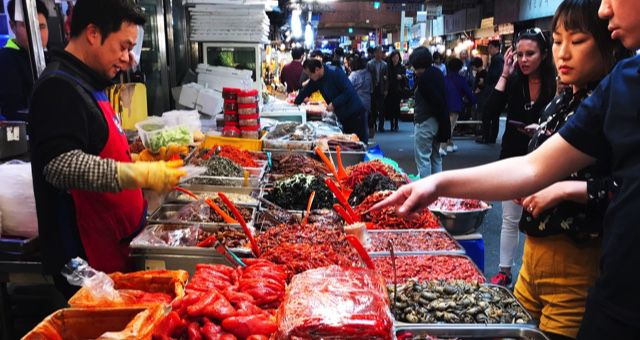 It’s hard to convey the extent to which I’m eagerly awaiting Michelle Zauner’s literary debut. If you don’t know, Zauner, a.k.a. the solo music artist Japanese Breakfast (who’s Korean), has signed a book deal with Knopf. The book in question, a food memoir titled Crying in H Mart, will follow her New Yorker essay of the same name. Lately, I’ve been searching out books to read while waiting for Crying in H Mart—books that remind me of what I love about the essay.

In “Crying in H Mart,” the Asian supermarket H Mart serves as a bittersweet backdrop for the death of the writer’s mother from cancer. Zauner talks about her experiences growing up biracial, of food as the primary means of connecting to her Korean mother’s culture, and of H Mart as a “holy place” for “people from all over the world who have been displaced.”

I read Zauner’s essay shortly after having gone to an H Mart for the first time with my Korean grandmother. Like Zauner, my parents are white and Korean. But my father is the Korean one, and I grew up with limited access to him and the culture. The connections I did have, however, were also often food-related. Recently, following some deaths in my own family, I’ve been compelled to reopen some of those connections. It’s been both rewarding and painful, and “Crying in H Mart” has helped me through it.

Of course, I can’t relate to the exact circumstances of Zauner’s experience, but “Crying in H Mart” has made me feel less alone in my own complex, bittersweet relationship with Korean food. It’s also inspired me to read and reread certain books in an effort to soothe my anticipation for Crying in H Mart the memoir. If you’re awaiting it as eagerly as I am, maybe you’ll find some joy and relief in these reads, too. 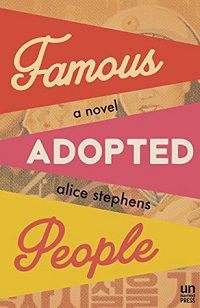 To start with, here’s a fairly recent novel from another mixed-race Korean writer that I feel hasn’t gotten enough attention. Lisa, the main character, is an adopted multiracial Korean American who ends up learning more about her family history than she ever bargained for.

While food isn’t necessarily a central focus, Famous Adopted People employs many scenes involving eating, some appealing, some disturbing, and some outright gross. The wide array of different dishes that appear in the book add to the over-the-top tone of the story. They also could be interpreted as corresponding with Lisa’s omnivorous hunger for both new and familiar experiences.

In the opening scene, Lisa is hungover and trying not to throw up on a sesame tofu ring in a Dunkin’ Donuts in Seoul, where she’s having a fight with her best friend Mindy. A bit later on, we’re introduced to Spaghetti Kyu Bok’s, a restaurant that serves noodle soup “spaghetti.” Eventually, Lisa finds herself in North Korea, planning elaborate menus with a sushi chef.

Some of this may sound a bit incongruous, and that’s why I chose this book to be first on the list. Like H Mart, Famous Adopted People is a vast land of seemingly contradictory riches. It’s bright, messy, improbable, loud, and magical, also like H Mart. No matter who you are, it will transport you. 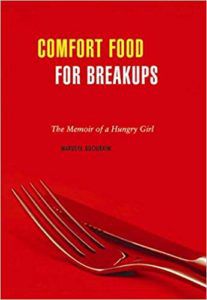 comfort food for breakups: The memoir of a hungry girl by Marusya Bociurkiw

As a result of digging deeper into what Korean food culture means to me, I’m now more interested in food memoirs in general. There are great ones by professional chefs and critics, but at the moment I’m especially interested in hearing thoughts from people outside of that world. And Marusya Bociurkiw, a Canadian scholar, feminist activist, and filmmaker, has written one that I’m currently enjoying very much.

Bociurkiw pairs vivid food memories and corresponding recipes with reflections on family, aging, and relationships. These reflections are tied to her identity as a queer woman and her Ukranian heritage. Bociurkiw also has a more recent book out that I may try after this one: Food Was Her Country: The Memoir of a Queer Daughter. 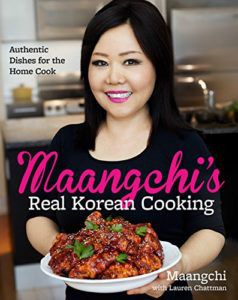 This one’s a bit obvious, but I couldn’t leave it out. In addition to writing about food, Michelle Zauner has been hosting episodes of the food series Munchies. This includes one starring Maangchi, a Korean cook and YouTuber adored by many. In the episode, Maangchi, Michelle, and Sarah Lee of Kimbap Lab eat and talk about budae jjigae, or “army base stew,” a combination of food from American military bases in Korea—like processed meat and cheese—and older Korean cuisine. They also discuss questions of fusion, authenticity, and cultural appropriation.

I’ve been using Maangchi’s recipes to help recreate some Korean dishes from my childhood. The first I tried was japchae, a dish made from sweet potato starch noodles, and it turned out beautifully. I won’t compare it in any way to my grandmother’s japchae, because Maangchi has hordes of loving fans, many of whom consider her a kind of “mom,” and I don’t want to set them against me. I also want to state for the record that I, too, love Maangchi, and someday I’ll be brave enough to try her Korean fried chicken recipe.

Eat Up: Food, Appetite and Eating What You Want 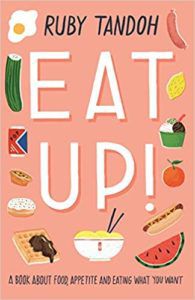 Along with Comfort Food for Breakups, this book has been giving me specific meal and snack cravings way too late at night. Tandoh, a former model and runner-up on The Great British Bake Off, has become an outspoken critic of many elements of food culture. From what I can tell so far, this book is about happiness and freedom as it relates to food. It’s sort of an anti-diet book, a counterpoint to all of the diet and health books claiming to offer some kind of ultimate eating solution.

While she hasn’t talked too much about herself in my reading so far, I know that Tandoh is queer and mixed-race, and I can imagine how that may have informed the insights and opinions she has. She advocates for the idea of pleasure and enjoyment as the main metric for eating, and digs deep into the cultural motivations and power dynamics behind body shaming. She also offers simple “recipes” for enjoying food. One involves leaving a Cadbury Creme Egg in your pocket for a while, then eating it.

Noah is yet another mixed-race Korean writer, and his food musings are detailed in “Bad Kimchi.” He’s become a little famous on Twitter for encouraging people to eat their instant ramyun with processed cheese. Noah has mentioned both Michelle Zauner and Maangchi in his writing, and recently published an article about a conversation with Michelle.

Shing is the artist and cartoonist who created what’s probably the best-known representation of Resistance Auntie, the Asian woman who gave Trump the finger at his inauguration. Shing’s comic “Just Eat It.” delves into their feelings and opinions on the confused concept of food authenticity as it relates to people’s perceptions of their Malaysian heritage.

The books above are all over the map: A novel, a memoir, a cookbook, an anti-diet book. But they all resonate with me in a similar way to “Crying in H Mart.” They all remind me of how food is intimately personal and at the same time very political. I’m enjoying them immensely, and I hope that you do, too.