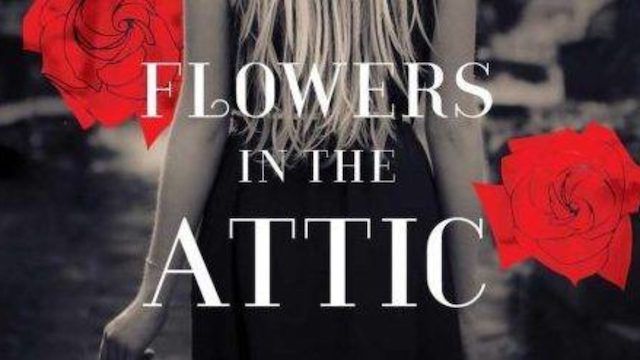 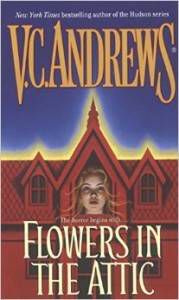 Flowers in the Attic, published 40 years ago in 1979, is undoubtedly a cult classic. It’s a book that gets passed from older sibling to younger sibling, from classmate to classmate, often never touching adult hands. Taboo, salacious, gothic, trashy. It fits all those descriptions and more. Love it or hate it, it looms large in our collective literary memory. It’s an obsession of Gillian Flynn’s. I, too, hold it in my heart as a problematic fave, and I wanted to investigate why.

What I find so interesting about Flowers in the Attic is its position as both a subversive and non-canonical book. Another word for “non-canonical” would be trash. Trash books are expected to be forgotten; they supposedly evince no literary merit under scrutiny. They’re the kind of books that teachers and parents roll their eyes at teens for reading. Eye-rolling is actually one of the best case scenarios regarding authorities’ reaction to trash. Other reactions include hand-wringing and concern-trolling over teens’ reading material, or outright policing it.

Canonical books are those that remain on middle or high school curricula year after year. They are the books that win awards and end up on various education and library associations’ best-of lists. Experts regard these books as classics. Their status does not protect them from being challenged, however, and they often are.

Whether a book is trash or canon, most young adult literature, especially during its rise in the 1970s and 1980s, ultimately reveals a normative path for its characters. According to the dominant narrative, teenage years can include rebellion and experimentation as long as it’s contained in time. As long as the characters are ultimately on the conveyor belt to heterosexual marriage, children, and the replication of their family’s social standing, they’re just having harmless fun like their parents before them did.

Thinking about these dimensions of young adult literature inspired me to construct an alignment chart of sorts. Two axes: one the trash to canon continuum, the other the subversive to normative continuum. I filled it in for you with some titles of early YA literature. 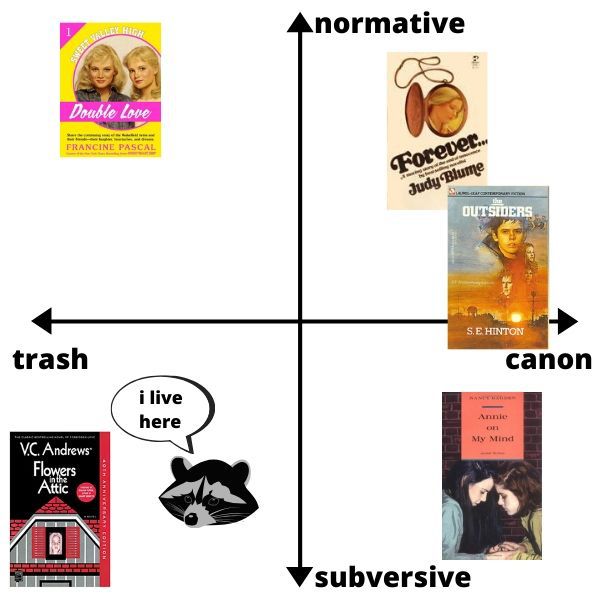 The Sweet Valley High books are a prime example of trash; parents and teachers often feel readers aren’t being sufficiently edified while spending time with the Wakefields. I placed these books in the “normative trash” quadrant because the vicissitudes of the Wakefield twins never make you worried about whether they’re going to be okay in the end. Jessica Wakefield may run in a dangerous crowd from time to time, but we all know she’ll be rolling her SUV into the cul-de-sac where her McMansion sits in no time.

An example of a “normative canon” YA novel is Judy Blume’s Forever…, which has certainly been challenged plenty of times. It has also been held up as an exemplar of sex-positive YA literature. In Forever…, Katherine gets to be a little rebellious in high school by having premarital sex (that was certainly more rebellious in 1975), without real fear of pregnancy or disease, because her politically progressive, middle class upbringing protects her. At the end of the book, Katherine is no longer in love with her high school boyfriend. Having shed him, she can move on to achieve what she wants: college, career, and as the book implies, more boys.

The Evolution of Subversion

Canonical books can also deal with subversive themes. S.E. Hinton’s The Outsiders, one of the earliest books that might be considered young adult literature, straddles that line on my graph. The Outsiders flirts with true waywardness (for its time) through the depiction of a homoerotic relationship between two young men. As often happens in this kind of narrative (see also: Rebel Without a Cause), tragedy befalls the wayward teens. Johnny’s untimely death in The Outsiders is the impetus for Ponyboy to perhaps return to a more straight-and-narrow life. The ending of the novel is ambiguous, however, and Ponyboy’s future is hazy.

Annie on My Mind arrived in 1982, an early example of a YA romance between two young women. When it was published, 15 years after The Outsiders, it was possible to have an optimistic ending in a queer book. Finally, something truly subversive! Subversive and aspirational to boot.

And then there’s Flowers in the Attic. Hanging out in my favorite quadrant, the subversive trash. Nothing aspirational about this one. All four quadrants are my babies and I will happily read books wherever their home on my graph. Still, there’s something very exciting about this one quadrant. You know you’re in for a wild ride. Let’s get into it.

The two main characters of Flowers in the Attic, Cathy and Chris Dollanganger, are secreted away to a secluded part of their grandparents’ enormous mansion. They must fend for themselves and their two younger siblings. This period of captivity robs Cathy and Chris of a typical teenage life. The horror in the narrative stems from exaggerated versions of questions that easily arise from the teenage imagination: What if my parents keep me from the future I want? Do I have to be just like my parents? What if I have to grow up “too fast” and aren’t allowed the latitude (white, affluent) teenagers usually get?

These are questions that could be, and sometimes are, addressed in more realistic young adult fiction. V.C. Andrews uses the intense drama and exaggeration available to a writer using gothic tropes to provide her resounding answer: it would be terrifying, and it would scar you for life, but you might be able to get out alive.

The captivity of the Dollanganger kids means they will match the trajectory of their parents because they’ve been denied the opportunity to grow into something new and different. If no school or friends or sunshine is a horrifying idea, this one is far worse. For someone like Forever…’s Katherine, stepping into her parents’ life after a teenage dalliance is precisely the goal. Cathy and Chris, however, are products of an incestuous relationship between their mother and her half-uncle. To recreate their parents’ status is to recreate incest, and indeed that is how the narrative progresses. The horror of Cathy’s eventual rape is not in its unexpectedness but in its inevitability, thanks to the tragic circumstances of the characters and the internal logic of the narrative.

Some people aspire to be like their parents. For others, nothing could be more frightening. And those are the people V.C. Andrews is writing to. She uses tropes from and allusions to gothic literature throughout the book to heighten the fear. Gothic literature often explores the horror of being trapped, literally or figuratively, inside a house. By the end, just as in the gothic masterpiece Frankenstein, Flowers in the Attic has some self-aware and pitiable monsters who ultimately escape their creators. Cathy, Chris, and Carrie flee not to the Arctic but to Sarasota, Florida, because as outsiders they anticipate a welcome from the circus folk there. A teenage reader, one who identifies with the realistic horrors wearing gothic disguises, can relate and sympathize with this subversive, salacious, oddly hopeful book.

Nowadays, it’s easy to find YA literature with a less twisted version of the ideas that can be gleaned from this book. You don’t have to be like your parents, you can build a found family if you need to. Six of Crows springs to mind. The existence of these more canonical books, however, doesn’t negate the pleasure of rooting around in the trash. Flowers in the Attic endures at 40 years old because it’s still the shiniest trinket in the subversive trash heap, and raccoons like me keep grabbing for it.