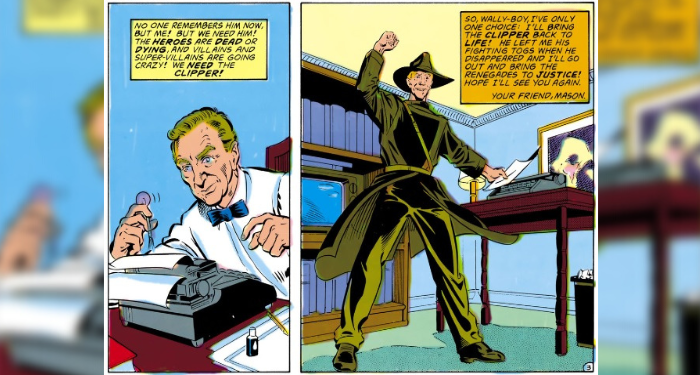 Mason Trollbridge was a slum kid who came of age during the Depression. Decades later, he came into the Flash/Wally West’s life when Wally was at a particularly low ebb. He’d won millions in the lottery and then lost it in a stock market crash (probably this one), then he lost his powers and his girlfriend, leaving him with a mountain of debts and a clingy, manipulative mother. (To be fair, her husband had just tried to kill her.) In Flash #15, Wally was forced to move into the same crummy apartment building where Mason lived. They hit it off quick.

Right from the start, Mason made a habit of popping up exactly when and where the Flash — whose true identity was public knowledge by this point — needed assistance. He made a natural sidekick. As we learn in Issue 20, there’s a reason for that: during the Depression, he worked with a hero named the Clipper, who got his name thanks to his penchant for mutilating his opponents’ ears when he didn’t kill them outright.

Mason had rather fonder memories of the Clipper, who was a cross between the Shadow and Bonnie and Clyde. At 14, he became Clipper’s sidekick and something of a mirror to Wally’s own experiences as a kid sidekick. “[T]he Clipper always said that a kid who fights crime is a kid with character,” Mason reminisces at one point.

While Wally’s mentor was as squeaky-clean as they come, the Clipper was a deranged drunk who had young Mason driving getaway cars and shooting tommy guns. But in Mason’s rose-tinted view, the Clipper was a “great guy,” just a little “intense.” So he decides to take up the Clipper’s identity himself.

(Interestingly, Mason’s profile in Flash Annual #3 casts doubt on whether the Clipper really exists or if Mason made him up. So there’s that.)

Alas, he only appears as the Clipper one time, but he continued to help Wally solve various crimes, sometimes while wielding a whip.

Aside from sidekicking, Mason worked as a carpenter and a truck driver before he retired. Now he does occasional delivery jobs for his son, Denny. He’s got another son, Donnie, who he threw out of the house and didn’t see again for years. He also has a daughter named Susie, but they don’t seem all that close. In fact, when Wally leaves New York and relocates to Keystone City, Mason goes with him.

(Some sources claim he only has one son, I guess assuming “Donnie” was a typo for “Denny.” But like I said, Mason kept in touch with Denny while shunning Donnie, so that wouldn’t make much sense.)

Upon moving to Keystone, Mason started a “fix-it business” and volunteered at a local gym, teaching kids to box. Everything was going along normally enough until Mason learned a little something about his son that he wished he hadn’t. While Mason was once an aspiring superhero, his son Donnie also had a secret identity: the Last Resort, who charges people exorbitant fees to make their problems go away, permanently.

Mason helps stop Donnie’s rampage, they agree to talk, and that’s the end of that storyline.

Mason then proposed to his girlfriend — Lenora McDonald, sister-in-law of the Icicle — and suggested they get married right then and there…in the middle of Wally’s mother’s wedding, which strikes me as really rude. He disappears from Wally’s life not long after: presumably, he was busy setting up house with Lenora.

Despite feeling a little underdeveloped — How did his relationship with Donnie pan out? Did he really make up the Clipper? Why? If he didn’t, what effect did hanging out with such a violent “hero” have on him and his relationships? — Mason is a fun, grounded character. He likes and admires the Flash, but he doesn’t fawn over him, instead retaining a practicality that the self-absorbed, not-yet-old-enough-to-drink Wally desperately needs. I wouldn’t go so far as to call him a father figure — maybe a weird, grumpy uncle — but he did make for a nice counterbalance.

The CW’s Flash featured a version of this character, but they renamed him Mason Bridge because the CW hates anything resembling originality or fun (Stargirl and Legends of Tomorrow excepted). I don’t recall him ever becoming a vigilante, either, but I haven’t seen the show in a while. I do remember him getting killed, a fate which the comic book version seems to have avoided.

In any case, if DC wanted to bring him back, I wouldn’t object.