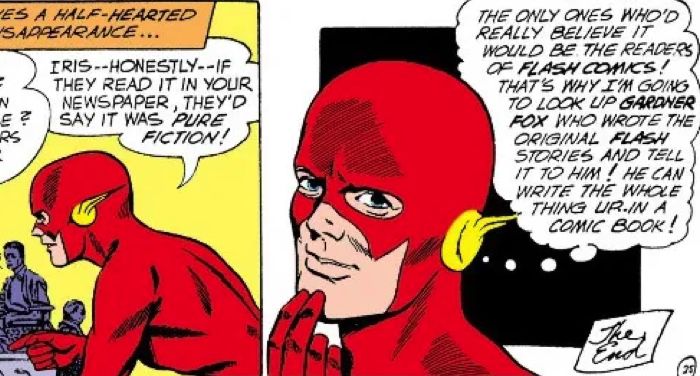 The DC universe is actually the DC multiverse, a series of Earths inhabited by different yet recognizable versions of the same characters. This was not always the case. It all began in Flash #123, which has become an iconic issue specifically due to its role in creating the multiverse that we know and are eternally confused by today. Speaking of specificity, we even know the date of this historic event: June 14, 1961 — exactly 60 years ago today — is when the Flash realized he wasn’t as unique as he thought.

The funny part is, it was all an accident. The Flash was entertaining some orphans, as one does, when he accidentally vibrated in such a way that he sent himself into another universe. Naturally confused at first, he checks a newspaper for the date, and that’s when we see this all happened on June 14.

Barry is even more confused to learn that his old familiar hometown of Central City has vanished and been replaced by Keystone City. But Barry has heard of Keystone before: that’s the home of Jay Garrick, AKA the first Flash! Barry remembers this nugget of trivia from the comic books he used to read. See, we found out during Barry’s first adventure in Showcase #4 that Jay was a comic book hero. When Barry gained superspeed of his own, he named himself after his old, allegedly fictional idol. So how could Garrick’s “real” adventures in his world get turned into comic book fodder on Barry’s world? Hold on to your hats.

I know it’s early in the ’60s for everyone to be high, but I think Gardner Fox got a head start.

Anyway, Jay has been thinking of coming out of retirement to solve a series of strange crimes. He takes Barry’s appearance as a sign of cosmic approval, and both Flashes team up to defeat a trio of Jay’s old nemeses — the Thinker, the Fiddler, and the Shade — who have just come out of the woodwork after years in prison. Barry and Jay split up at first, which proves to be a mistake. Barry gets bamboozled by the Shade, while the Thinker easily out-thinks Jay, who begins to wonder if maybe he’s too old for this superhero gig after all.

Finally, they decide to work together to take down all three crooks. I’m sure Flash aficionados were flipping their lids over this. These days, crossovers and team-ups are a dime a dozen, but imagine seeing two Flashes together for the very first time!

The issue rather cutely ends with Jay promising to visit Barry’s world. (He did so on April 1, 1962 in Flash #129, helping to defeat Trickster and Captain Cold, which is in and of itself a historic event: none of Barry’s enemies had ever teamed up that way before.) Barry then claims he’s going to track down Gardner Fox and make him write a comic book about this adventure. I don’t know why more comics don’t end with the characters threatening to go all Misery on their writers.

Of course, Barry is now more famous for wrecking universes than discovering them. The event comic Flashpoint — and the entirety of the Flash TV show, apparently — has him decide to screw up the universe for personal reasons. But it all started with this simple story.

After this issue, the multiverse continued to develop and expand, and it still exists today. DC did attempt to get rid of it once, in the landmark Crisis on Infinite Earths. They felt that the multiverse had become too unwieldy and so created a universe-eating supervillain to trim it down to size. In a nice bit of irony, Barry Allen — the man who discovered the multiverse that DC became so disenchanted with — died trying to save the few remaining universes.