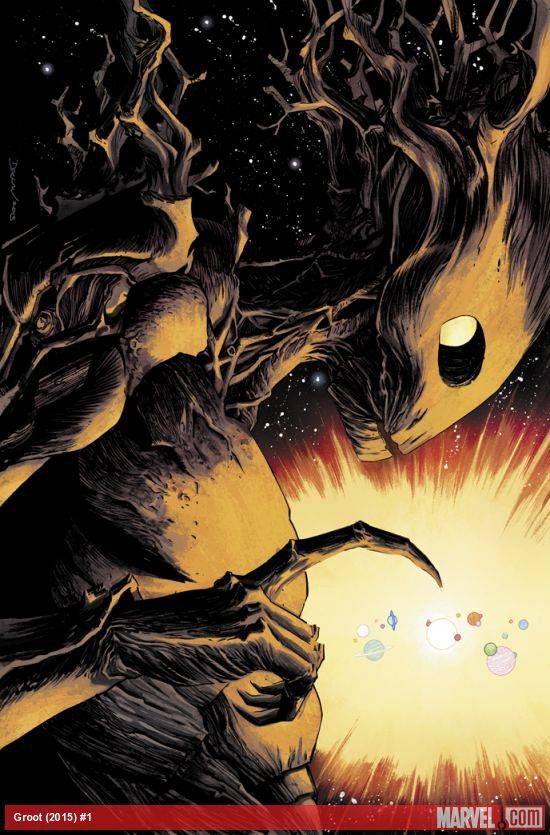 As someone who can’t Read All Of The Things, it can be frustrating to approach reading a new series featuring a character who has been around for a while. Do I read some backlog? Watch a TV series or catch up on some movies? Or just jump in?

Increasingly, I’m finding that “just jump in” is the way to go with comics, and I was delightfully reminded of that when I had a look at Groot #1 by Jeff Loveness and Brian Kesinger. In this book, the adorable Groot and his best pal Rocket are on an intergalactic road trip, and they get into all kinds of shenanigans. You don’t need to know anything else. You don’t need any background. The entire story is right there.

My introduction to the character Groot, as well as the other Guardians, was the Guardians of the Galaxy film. After watching it, I’d been interested in picking up some comics featuring those characters, but never got around to it until now. A #1 with my favorite Guardian as its title was already irresistible, but how to sweeten the deal? Toss in one of my favorite artists, Brian Kesinger, and give the writer the challenging job of a main title character with a decidedly limited vocabulary.

Silent comics resonate with me. What I love most about them is how you can apply your own feelings into the lack of dialogue, and let the art take you through the story. It’s one of the reasons I’m so smitten with Perfect Square’s Hello Kitty comic series – those books are dialogue-free, but so full of heart and adventure anyway. Groot isn’t a silent comic by any means, but one of the things I like about the character is that although you often have Rocket giving you some context clues, you don’t ever really know what Groot says. I mean, you know he said “I am Groot,” but what was his intended diction? This is where you get to interact with the comic a bit more than usual, and it’s so much fun.

At risk of gushing just a little too much, I want to briefly talk about how Groot is created by a “small” team. (I say “small” here in the sense of the key roles: art, writing, letters, editing, etc.) Kesinger does linework, inking, and coloring, and then there are two Jeffs. Loveness on writing, and Eckleberry on lettering, which I’d like to mention is rather brilliant. Kesinger’s designs are elaborate, and I honestly can’t get over all the pretty space-y backgrounds (just look at this panel on the left!), but yeah – Eckleberry had his work cut out for him, too. The attention to detail in general is spectacular. Groot’s texture is totally different from Rocket’s, and different from other aliens’, and so on. And thanks to the panel layout and perspectives to accommodate Groot, it looks like he’s jumping out of the page at me.

Loveness’ job here is no easy task, and it’s only going to become more challenging as the story develops. Kesinger’s artwork does a brilliant job in communicating Groot’s feelings at any given time, giving him so many variations of “serene” and “happy” and “optimistic,” as Groot tends to be when he isn’t fighting. But you still need just the right beats and for every “I am Groot.” to be written in just the right way. Part of Groot’s charm is that despite the fact he can’t communicate in words most other characters can understand, he speaks anyway and gets his feelings through. And when you sub-vocalize, you “get” it. You have no clue what he said, but you get it anyway. It’s all right there on the page. You don’t need any back story.

For my jump-in-ness I’ve gained a new, brilliant vocabulary word (“flark”), and a super fun new title to anticipate each issue. Adventure, clever story-telling, and lots of heart do a Grootiful comic make.