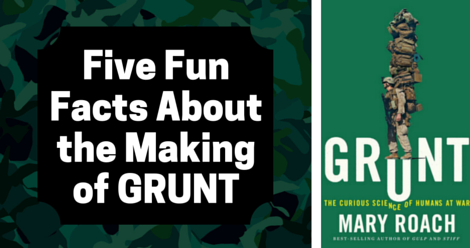 A summer that starts with a new Mary Roach book is bound to be a good summer of reading. Her mix of weird science and on-the-ground reporting in strange places is always a delight to read, especially when you’re in a situation where you get to share fun facts with the people you’re hanging out with.

Although the topic of her newest book Grunt – “the curious science of humans at war” – doesn’t seem as inherently funny as sex research, astronauts, ghosts, or the digestive system, Roach comes at the topic in some interesting ways. Here are five great behind-the-scenes tidbits about the reporting and writing of Grunt.

While in India reporting on the world’s hottest chili pepper, Roach was told that the Indian Defense Ministry had made a non-lethal weapon, a type of mace or tear gas, out of the chili pepper. Since she was in the area, of course it made sense to try and find out more:

“While I was there, just poking around on their website and in the lab, they were doing a test of a leech repellent, someone else was looking at telepathy. I thought, whoa, military science is kind of an esoteric, interesting world – it’s not just bullets and bombs, which doesn’t interest me as a writer or reporter. … There’s all these kind of lesser-known labs and institutes, which is really my bread and butter, weird labs and institutes. I never got anywhere further with the Indian Defense Ministry – they’re not returning calls, not answering faxes, forget about email… That was disappointing, because I’d have loved to cover that.”

Given the military’s reputation for secrets and classified documents, Roach said she fully expected to run into roadblocks as she started reporting on the book. Instead, the Pentagon and top leaders were relatively open with letting a reporter jump into the strange science they were working on:

“Partly based on my experiences with NASA (when writing Packing for Mars), which could be trying at time in terms of access, I thought I’m just going to see if there’s someone at the Pentagon – I could start at the highest level so I don’t have that frustration of getting kicked upstairs. There actually is a book public affairs office at the Office of the Secretary of Defense where if you have a book proposal they can basically give it support. Which is not to say they set anything up or tell anybody they have to do it, they just say ‘We’re alright with this.’

These are stories they’re happy to share. I’m not sharing any classified information, obviously, I’m not doing an expose on the VA. There really isn’t any reason for them to want to cover it up. The military is surprisingly transparent lately in terms of their willingness to talk about suicide. Awhile back there was a tremendous amount of coverage in the press of PTSD and suicide and traumatic brain injury. They’re more straightforward, not squirrely CIA, kind of. That was something I didn’t know going into it.

“I was reporting on sleep deprivation, so there was a good story to be told, but nonetheless it took a long time to find out who’s swim lane this is in, who has to sign off. That took a while. There were a couple very, very helpful people at the Naval Medical Submarine Research laboratory who were like, “I want to make this happen.”

Even if you found the admiral who was willing to say yes, then you had to find the submarine commander who would say, “I’ll let her on my boat.” I don’t think they were about me seeing classified information, I think it’s just a bother – they’ve got enough work as it is to sort of worry about having a guest on board. That one was the most time-consuming to set up. Persistence, it pays off.”

One of the best parts of any Mary Roach book is getting to be a fly on the wall for the in-person reporting she does. Roach said she uses those scenes to help provide humor and narrative to each chapter. One of the funniest chapters in Grunt is about research on diarrhea and how that affects soldiers in the field – especially those in Special Operations. After few results from sending out an e-mail asking for volunteers to talk about bowel issues while on missions, Roach and Seamus Nelson (a public affairs officer at the base) approached a Special Operations soldier while in the mess for dinner:

“First I thought oh, Seamus, can’t we sent out an email and ask people and maybe they’ll show up? Of course, nobody from Special Operations responded to the e-mail and Seamus is like, ‘I’m done sending e-mails about diarrhea. I’m done.’

I’d literally flown all the way to Djibouti to have that conversation, so I had to do it. The guy was central casting, Special Operations. He was so, just kind of omnipotent and scary and just icy. Like, how do I sit down and interrupt this guy’s dinner to talk about diarrhea. This is the biggest reporting challenge of my career!”

Despite getting to cover clothing, military crash tests, genital transplants, maggots, shark repellent and more in the book, Roach said there were many other subjects she thought about covering that didn’t make it into the final version of the book for a variety of reasons. Some of these topics include:

And finally, a bonus sixth fun fact: Roach’s favorite military acronyms are BASH and BAM, both thanks to the U.S. Air Force. BASH stands for Bird Airstrike Hazard and BAM stands for Bird Avoidance Model.