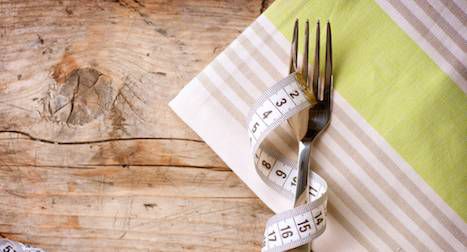 In 2016, I learned that I was fat. I’ve been fat my whole life, off and on, and even when I was smaller (obediently shrinking, absorbing compliments left and right, hearing comments about how gross I used to be) the word “fat” was rarely used. Not even the meanest people will actually call you fat. They might ask you if you like donuts, imply that your furniture is on the verge of breaking, or congratulate you for ordering a salad, but people rarely say “fat.” I think that’s why claiming the word, typing it and having it come flying out of my mouth, feels so damn good. This word is a descriptor, one that applies to my fabulous self, and if you were going to try and search for condescending terms to discuss this situation with me (overweight, larger, curvy, hefty) I’ve trumped you. I’m fat. I like it.

I was not always so proud. I have been searching for, about to start, or struggling with a diet for my entire life. I have tried Weight Watchers, Atkins, 21 Day Fix, low carb, no carb, simply eating significantly less food, eating all organic, eating only berry cereal, not eating after 9pm (then 7pm), drinking lemon water, drinking salt water, taking laxatives, taking vitamins, counting calories on seven different apps. I have stood in front of diet-approved workout DVDS, listening to an angular woman chirping to me that I am finally going to look good in my bathing suit this year! The fat woman modifying the exercises to her right looks as weary as I feel. “Don’t tell me what looks good,” I whisper under my breath. “I’m trying to stay alive.”

Because that is the new vicious lie that has developed since I started dieting as a girl. No longer is fat simply unsightly, a barrier that keeps you from a happy life trailing scarves behind you on the beach. Now it is insidious. It is trying to KILL YOU. You are, at all overweight times, MOMENTS FROM DEATH! You’re going to DIE! It will choke you, stop your heart, poison your blood, slow your breath until you fall over. Cause of death? Fat. Lazy, stupid, idiotic fat accumulating on your lazy, stupid, idiotic body. You’re not smart enough, strong enough, dedicated enough to follow the SIMPLE STEPS to keep the fat off your body. You’re going to die, and you deserve it.

How did I get here, calling myself a fat woman, proudly brandishing a word that used to represent my worst nightmare? Why I am finally okay with the one aspect of myself I have actively tried to “fix” for my entire life? Oh, you know, books. Badass, life changing, body positive books. The internet is a terrible and beautiful place, but I will be forever grateful because it was my window to the body positive movement. I found bloggers writing powerful manifestos and gentle truths. I don’t have to be skinny to be happy? I don’t have to be ashamed of myself? It took me almost a year of immersion before I was ready to call myself fat, and thanks to these amazing books, I’m never going back. 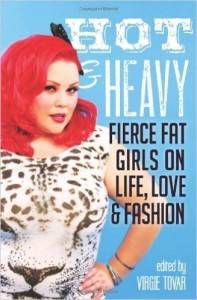 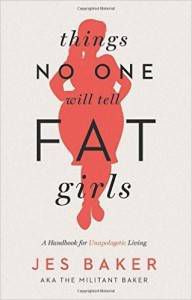 Things No One Tells Fat Girls by Jes Baker

This was my very first introduction to fat girl literature. I had followed Baker’s online presence for a few years (her blog, The Militant Baker, is a don’t-miss) and was so excited to read her book. I love to take pictures of what I’m reading for Instagram and Listy, but I hesitated with this cover- I was still getting used to flaunting the F word. I posted a picture of it…then started reading it in public. After a few empowering chapters, I was reading this on the elliptical at the gym, head held high. Baker covers a ton of important topics, but her statistic-filled chapter breaking down the mechanics of the diet industry was the most important thing I took away.  It should be obvious that an industry that can only exist if we are unhappy with how we look will have a vested interest in keeping us unhappy with how we look, but Baker explains the patronizing way that diets and the companies that profit from their use perpetuate self-loathing and then reach out, calling themselves the solution to our low self-worth. Baker specifically calls out diet culture for the bullshit it is. 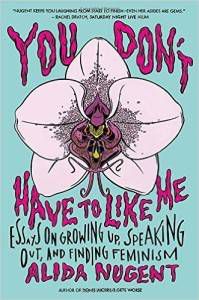 You Don’t Have To Like Me by Alida Nugent

This series of essays is about Nugent’s embracing of feminism, and guess what? You can’t discuss feminism without touching on the screwed up social messages that women receive about their bodies. I strongly related to the essay about claiming a “one of the guys” persona and perpetuating sexism in order to feel accepted- that’s definitely a place I’ve been in the past, and reading about someone else in that position was heady relief. But her chapter about her struggle with bulimia and the myriad of issues that caused her body so much damage was also a powerful punch. Few women have avoided a struggle with some form of disordered eating, and hearing other women speak about this is kind of like becoming an adult and realizing that every woman you know has faced sexual harassment. Nugent calls bullshit on perfection, on traditional standards of beauty, and on beating yourself up. It’s fierce and empowering. 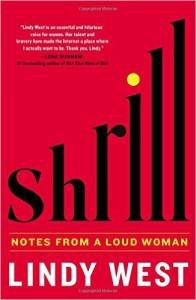 Shrill: Notes From A Loud Woman by Lindy West

I started loving Lindy West because of her writing on Jezebel (her piece about Love Actually actually made me pee myself) and her amazing work on This American Life. I knew Shrill was about feminism and body positivity, and I knew that West was funny, but I didn’t realize the combination would make me throw up praise hands so many times while reading. Shrill expertly covers topics such as dating while fat, being a woman in comedy, defending yourself against shamers- things you might expect. I found it more interesting when the chapters delved into less-heralded topics: disagreeing with/standing up to someone you like- her boss, Dan Savage- and her own need for acceptance of other fat bodies. West talks about her original shock at seeing larger bodies naked and celebrated, and how she had to immerse herself in images of fat bodies to normalize them for herself. As a person who has received the sometimes screamed message to COVER UP AND CROP FROM THE NECK UP, this resonated with me. West fights diet culture by refusing to accept that her body has to look different before she develops a rewarding career and finds love. West fights diet culture by fighting back against trolls and never allowing herself to shrink in the face of bullying. She also laments about counting almonds in a way that me laughcry. 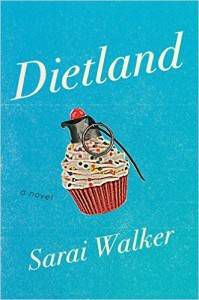 Dietland is the only work on fiction on this particular list (although I’ve celebrated fictional fat heroines in the past) because Dietland specifically spears diet culture directly in the jugular, with heavy swipes at rape culture and the porn industry in the process. Plum Kettle is not the slightly-plump almost-plus-sized heroine that often represents the struggle. She’s 300+ pounds, and she has been obediently trying to get smaller her entire life. The first few chapters illustrating the minutiae of her following the strictures of her diet were so difficult to read as a former crash dieter. Her discomfort on the street. Her future thin persona that is so real to her that she names it and buys it a wardrobe. Her complete confidence that nothing will derail her from her number one goal- to shrink. She will get thin or die trying. Transformations occur and they are DAMN empowering. This is a book for anyone who is sick of the trappings of being a woman in our patriarchal society. This book is about calling bullshit, and stomping on that bullshit with army boots laced over bright tights. Read it.

Am I missing anything? I’m hungry for more fat heroines, more books that skewer the diet-culture myth that people need to be slim before they can be happy. I need more books that call bullshit on this bullshit diet culture.