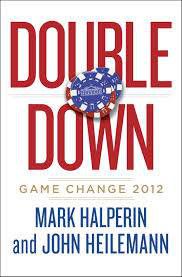 Obviously, House of Cards is ridiculously awesome. And you probably already know that it’s based on a Thatcher-era book by UK writer and Conservative politician Michael Dobbs, which was subsequently turned into a BBC miniseries that prompted our recent opportunity to say, “Oh my god you guys, Kevin Spacey is SO GOOD.”

But you’ll be done with the series soon, and then what? Season 3 isn’t out until 2015. You’re going to have to fill your newfound thirst for political intrigue somehow. Here are five suggestions for non-fiction books to help you do just that. Double Down: Game Change 2012 by John Heilemann and Mark Halperin. In the deliciously distrusting way House of Cards shows us how the sausage of governance is made, so too do Heilermann and Halperin show the down and dirty politicking of a real election: in this case, the Obama-Romney contest of 2012. This title is compulsively readable, occasionally very funny, and often shocking in ways both good and bad.

Why Romney Lost (and What the GOP Can Do About It) by David Frum. A good example of clear-headed conservatism that doesn’t get lost in hot-button, divisive politicking. It’s inside baseball, but not in a way that will alienate readers. Frum is a worthy rhetorical opponent — he’s someone you can disagree vehemently with while respecting immensely. That makes this book a great read from whatever side of the aisle you hail.

The Price of Politics by Bob Woodward. There isn’t a better political journalist that Bob Woodward, and this book is a phenomenally good primer on the Obama White House and a great explanation of the fiscal cliff and how that whole part of the world works. The Unwinding: An Inner History of the New America by George Packer. A thoughtful examining of the collapse of existing social and political structures in America since 1960. A good mix of focused case studies and big picture facts and figures, Packer’s prose is compelling and his thesis alarming. It is painful and uncomfortable to read at times, but it won the National Book Award for a reason.

The Nine: Inside the Secret World of the Supreme Court by Jeffrey Toobin. House of Cards takes us inside the legislative branch; with the delightful West Wing we got to hang out in the executive branch. Toobin’s engaging book walks us through the the inner workings of the Supreme Court. It’s clear-headed and a surprising page-turner.

And a bonus title for Canadian readers: The Longer I’m Prime Minister: Stephen Harper and Canada, 2006 by Paul Wells. Wells is one of Canada’s best political commentators, and this very balanced portrayal of Harper’s leadership in Ottawa (you can tell it’s balanced by checking out his Twitter feed, where left- and right-wing ideologues yell at him in equal numbers) takes you inside the inner workings of the PMO in ways that will haunt and surprise you.

Ok, so there’s five (plus one) from me. What are your favourite political tales — fiction or non-fiction? Share them with all your fellow House of Cards addicts in the comments below.