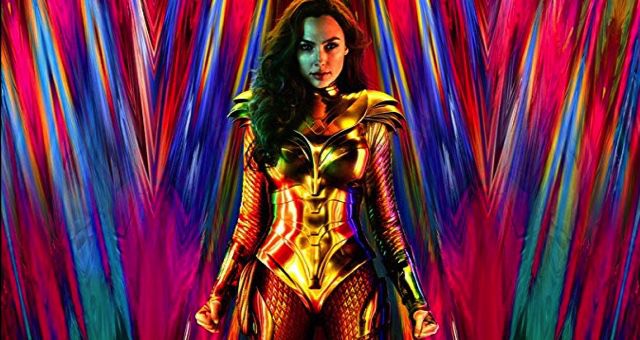 Did y’all know Diana could swing between lightning bolts with her lasso? Because I did not know that but now that I’ve seen it, I want it. Also, the tiara is a boomerang.

The music: If you lived through the ’80s, the techno beat and the song choice immediately took you back to neon, swoopy bangs, and pegged jeans. What a decade. So much synthesizer. So. Much. The titles do a great job of keeping pace in both color palette and font choice, creating a whole ambiance that leaves no doubt as to when we are.

Diana: Did you see that kick? The bullet deflection with the gauntlets? The power in those stacked platform heels? And the Lasso of Truth got more of a workout in the three minute trailer than it has since Aquaman sat on it. I appreciate that, despite still missing Steve and holding him close, she’s gone on to make her own life, to carve out a place for herself in the world where she fits. It appears she’s made some gal pals too and Diana should always have those.

Steve: I fully expected they were going to pull a weird hand waving thing like the ’70s show did in S2 when the timeline jumped to WWII and Lyle Waggoner returned not as Steve Trevor but as Steve’s son. I’m glad they didn’t go with the son thing because that would be super creepy in context of the film (in the show, it was made clear that Diana and Nu Steve were good friends, period, end of story). What I was most certainly not expecting was for OG Steve to be brought forward in time (we don’t know how yet). I think I’m here for it: it will be interesting to see him and Diana navigate not only his temporal displacement but the fact she’s lived a whole life without him.

The Eagle Armor: The armor is from Mark Waid and Alex Ross’s Kingdom Come Elseworlds run in which DC’s old school heroes find themselves at odds with the new generation of vigilantes. Why does that Wonder Woman, or this one, need armor? Because the threat is so great, even her near-immortality is threatened. Will WW84 draw from Kingdom Come? Probably not, since it’s part of the big CW crossover event this year (the DCU and the Arrowverse aren’t connected but I don’t see Warner Brothers repeating a story for what’s essentially the same crowd). But whatever Diana is facing, it’s going to be big, ugly, and deadly. Here’s hoping for some epic Act III business.

Cheetah/Barbara Minerva: We only get a couple seconds of Kristen Wiig in this first trailer, girl-talking with Diana over brunch and strutting into a gala of some kind. I’m hoping that those few seconds are indicative of an overall toned-down Kristen Wiig rather than SNL Kristen Wiig who I can watch for about five seconds before her voice hits that pitch that triggers my anxiety (no, I’m not kidding). Barbara Ann Minerva is one of 4 Cheetahs in the DCU, an archeologist and friend of Diana’s. She was transformed into a human-cheetah hybrid when she cut herself on a dagger belonging to a lost tribe of Amazons and possessed by the Goddess of the Hunt. It also, apparently, made her evil. 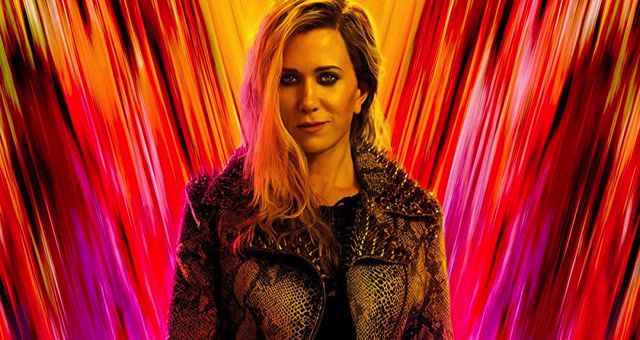 Maxwell Lord: Ares was an iffy villain choice in Wonder Woman; I think we all understood what Jenkins was trying to do but she missed by *that* much. A guy who makes metahuman juice and wants to take over the Justice League, though? That’s an evil I can get behind. Or, at least not laugh because he has goofy and incongruous facial hair (what is it with DC and mustaches anyway?). Also, Lord was apparently a cyborg at some point. Because comics. There’s more but I don’t want to spoiler and also, the inimitable Jess Plummer may be coming to you with an in depth profile in the near future and she will knock that sucker out of the park.

What We Didn’t Love

The Fashion: There’s nothing particularly ’80s about what anyone is wearing, with the exception of Steve’s fanny pack. The power suits aren’t square enough, the shoulder pads aren’t massive enough, the dresses are way too well tailored and aren’t embellished with chains or flowers or other…stuff. They are also completely bereft of white lace necklines and patterns found under the plastic on your grandmother’s couch. No one’s hair is horrifically permed or volumized. Also, how is no one wearing Hammer pants or Hypercolor? Or Chuck Taylors slash gleaming white New Balance slash the Adidas soccer shoes?

Pedro Pascal’s Look: I get it. They’re trying to make him look like a deliberately cheesy, Wolf of Wall Street reject. But the sheer audacity of putting that wig on your space boyfriend and mine is staggering. Baby Yoda does not approve. Also, if you’re going that way, go all in and give him animated Bruce Wayne shoulder pads with that rectangular jacket and pleated pants. Also, not to broken record but throw that wig in the fire. And then run because it looks flammable. 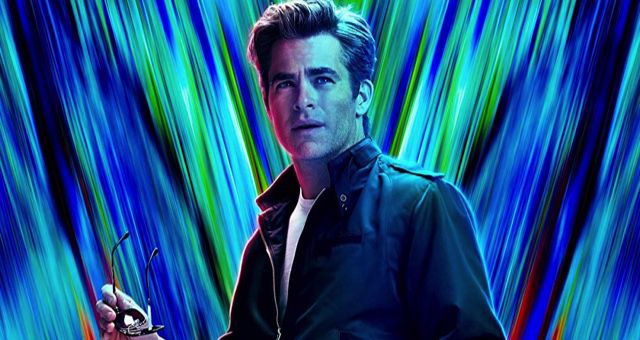 What We Have Questions About

Diversity: Apparently everyone in this undefined major metropolitan area is white? That’s not a thing. It has never, in the history of the world, been a thing and it certainly wasn’t true in the ’80s. I’m hoping it’s just the way the trailer was cut.

Cheetah Print vs Cheetah: Kristen Wiig’s character poster shows her in a cat print outfit but at no point do we see her as a large cat. Does she, at some point, in the movie, cut herself on the dagger and transform? Honestly, we can only hope so.

This was, in many ways, a perfect trailer, giving us a feel for the movie without giving anything away. It had some great footage of Diana kicking ass, which is, of course, The Most Important. It was also nice to see Steve and Diana together again and to watch her explore a sense of humor she’s developed since last she saw him. And I’m so, so glad they’ve gone with the non-toxic Steve Trevor who, while enjoying a good fight himself, can also stand back and be unironically and absolutely proud of the woman he loves.