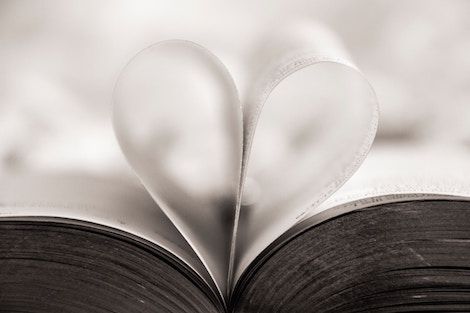 First fictional crushes can change the course of our lives. There simply comes a moment when the desirous people of this world begin to pale, slowly overtaken by the glory of those who live only on the page. One of my first fictional crushes was Finn from Enna Burning by Shannon Hale when I was twelve. He was quiet and honest, sweet and fiercely loyal, smart and brave. As someone who always had something to say or a story to share, there was something so enthralling about a character who wasn’t intimidated by the fire and humor inside the one they loved. (He was pretty much the dream for me for quite a few years after reading the Books of Bayern.)

I am not alone in crushing on written characters: read on to hear about how first fictional crushes changed the lives of other writers here at Book Riot.

Those Who Looked Way Too Good in Armor

I have loved Prince Caspian throughout my whole life, even still in adulthood, and I don’t even like guys that much anymore. Maybe it was about bravery, chivalry, all those things we look for in heroes. Maybe it was how humble he was in ascending the throne of Narnia, how kind he was to those around him. Maybe it was that kid who played him in the early BBC version that I used to beg my mother to rent from the library every week. Either way, I was obsessed. And then Ben Barnes shows up???? Are you kidding me??? I’m done. Excuse me while I go try every wardrobe in existence.

Cinderellis from Cinderellis and the Glass Hill by Gail Carson Levine

The Princess Tales series were chock full of thoughtful young men who were often kind to the girls they liked. It was a wild concept to a young girl raised on the “hair-pulling equals love” myth. Cinderellis, a gender-swapped Cinderella, especially captured my tender young heart, with his constant inventions and horse befriending. Ellis didn’t have evil brothers, but they and his father ignored him. Instead of turning his anger to others, he makes a bunch of alchemical powders that make people’s lives better. INSANE. Ellis is still the paragon of personality that I expect from all men.

Sabriel from Sabriel by Garth Nix

At first, I didn’t really get why I liked this book so much. By the fifth reading, I’d figured out that it was REAL LOVE based on Sabriel’s badass bell belt, armor, and ability to raise and put down the undead. Consider those crush boxes checked! I also think I liked having a heroine who can fix everything herself with her leadership skills, knowledge, and chutzpah. There’s a guy involved, but he’s sidekick material at best. She could do better, I remember thinking. My own endeavors to rescue the planet from its various plights grew obliquely from my secret, faint hope that Sabriel was in fact real, my age, and potentially interested in nearsighted idealists who preferred dark fantasy.

Those Who Broke Out of the Friend Zone

While I’m now strongly in the read-before-you-see-it camp (though no shade to those who watch first), I grew up watching the Megan Follows Anne of Green Gables miniseries and its sequel. It was on a relatively small and rounded screen that I was first introduced to the handsome and gallant Gilbert Blythe as portrayed by the late Jonathan Crombie. My heart was sold. I now refer to Blythe as “the foxiest fox of them all” and have revisited him both on screen and in print many times since my childhood. My only disappointment on Prince Edward Island was the lack of Gilberts (though, to be fair, I got engaged while there, so I can’t complain). Of course, it’s not just Blythe’s adapted looks—he’s smart, loyal, supportive, and challenges Anne (and, yeah, a little bit of a jerk early on, but he gets a pass).

I may no longer be interested in sporty blonde men, but at the time, Logan seemed to be the whole package. It also didn’t hurt that he realized just how great the usually shy Mary Anne was, a fantasy I think I held for my own life.

He may not have been the first, but he’s definitely the one who left the biggest impact. He’s tall, lanky, red-haired, and freckled. And he wears Backstreet Boys T-shirts. Marcus Flutie is the dreamiest of dreamboats, a former druggie who is more intelligent (and wise and romantic!) than he ever let on. He and Jess talk on the phone all night every night, and he slips poems into her locker to freak her out. He pushes her to be a better person and to find what truly makes her happy. In high school and college, I was always rereading the series and looking for my own Marcus Flutie. Dreamy sigh.

Those Who We [Super]naturally Fell in Love With

Percy Jackson from The Lightning Thief by Rick Riordan

Eh. It was the book that got me into reading, and Percy had sorta something to do with that. A wise-cracking, green-eyed demigod. Can you judge me?

I have to admit, I didn’t meet Virgil in the comics. I met him on Saturday morning cartoons, in the show Static Shock. That motivated me to find the original Dakota comics, in trade paperback form, from my local library. I deeply enjoyed doing that, and my crush deepened. Static is Virgil’s superhero persona, and he spends much of his time snarking at criminals or trying to keep his grades up in school. Virgil was a realistic teenager, though his show counterpart was more mature than his comic version. As a preteen, his humor and pain over losing his mother was relatable, since I had lost my father.

I’ve devoured this series so many times, my mass market paperback copies are almost falling apart at the seams. And Jesse de Silva was my first true love—a hot, nineteenth-century, Spanish-speaking cowboy—who…Also is dead. And a ghost. Not even a little bit realistic, but I could not get enough of Jesse and his querida-laced dialogue and devotion to Suze.

Sadly, this list only includes one character written by an author of color; this inadequacy is most likely because there weren’t as many diverse children books published back in the day. With swoony characters like Daniel from The Sun is Also a Star, Laila from The Gilded Wolves, and Hideo from Warcross, hopefully readers of today won’t miss out on the perspectives and representation of marginalized voices (and the chance to crush on some pretty awesome characters). Find books by authors of color for younger kids by reading about the 30 Must-Read Diverse Children’s Book from the First Half of 2019.

How old were you when a fictional character first captured your attention and affections? Tell us more in the comments. Interested in hearing more about our first fictional crushes? Check out our First Comic Crushes.