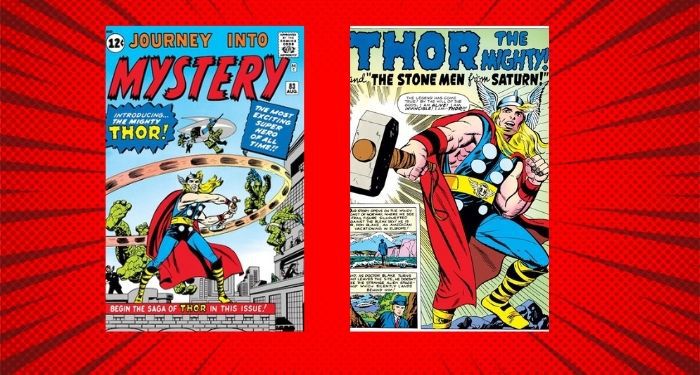 Superheroes have been around a long time, and most of the characters and genre conventions are pretty well established. But did every character always look and act the way we expect them to today? In this series, I’ll be looking at the first appearances of iconic superheroes to see what’s familiar, what’s fallen by the wayside, and what’s goofy as heck. Today: Thor!

Characters based on the Norse god Thor had been in comics almost from the beginning, but the Marvel character we know as Thor today first debuted in Journey into Mystery #83 (August 1962). Like so many Marvel mainstays, he was co-created by Stan Lee and Jack Kirby, with Stan’s brother Larry Lieber scripting. Not only does this year mark his 60th birthday (and also, like, his 1500th, but I don’t know what kind of present you get for that), he’ll soon be returning to the big screen in Thor: Love and Thunder, making him only the third superhero character to headline a fourth movie without being rebooted (alongside Batman and Superman), and making Chris Hemsworth the only actor besides Christopher Reeve to headline a fourth superhero movie. So yeah, Mama Frigga’s little boy has done pretty well for himself! But how did he start out?

There is so much going on on this cover. Absolutely tremendous.

The opening splash page is even better:

What I love about this story is that we’re one page in and already it’s throwing two absolutely bonkers unrelated concepts at us. The Norse god Thor and what’s presumably an alien invasion, in the same story? You know what, why not?

The next page confirms that, yes, the aliens (who are from Saturn) are here to invade Earth, with their super strength, invulnerability, incredible…um…jumping powers, and fabulous weapons. An “aged fisherman” sees them and hurries to warn the village, but no one believes him — though an eavesdropping Don Blake notes that he seems sane enough.

Don hides in a cave, where he finds a hidden chamber with an ancient cane inside. He tries to use it to pry open a second exit, to no avail:

Striking the cane has a miraculous result:

Presumably the lesson to children here is “Whenever you lose your temper, hit things with a stick.”

Don, now possessed of super strength, easily moves aside the troublesome boulder and escapes, then tries to puzzle out what has happened to him:

One of my favorite things about Golden and Silver Age comics is that they’ll just make up whatever they want about various mythological figures — e.g. this Supergirl comic confidently declaring that Neptune was telepathic. Thor is a very fun figure in the myths I’ve read, but I don’t think I would ever use the word “noble” to describe him.

Don proceeds to test his powers and discovers that if he throws the hammer, it will return to him, but if he puts it down for more than a minute, he reverts back to Don Blake. He can create storms by banging the handle on the ground, and fly by throwing the hammer but just…not letting go of it, which has always been my #1 favorite of Thor’s powers. There’s a lot of time spent on exactly how many times he has to bang the handle on the ground to create various weather conditions or revert to Don, which is very Silver Age — they loved extremely specific and arbitrary rules.

Thor flies off to confront the aliens, who have begun publicly terrorizing humans, and he turns out to be more than a match for them:

The aliens flee, believing that they have been wildly misled about how strong humans are. Don’s pretty pleased with himself. I can’t wait until he realizes he’s the real, actual Thor!

I had never read this comic before researching this article, and so I was very surprised to discover that there’s not even a hint that Don might actually be the real Thor, and not just possessed of his abilities. I did some digging, and it’s not until Thor #159 (December 1968) that Don learns the origin we’re all familiar with from the movies and modern comics: that he is really and truly Thor, the god of thunder, banished from Asgard by Odin in an effort to teach him humility.

That means that for six and a half years, Thor was…just kind of a regular superhero, with a secret identity and, like, a job and shirts with sleeves and stuff. He even has the usual Silver Age Marvel angsty thought-ballooning over his female employee, nurse Jane Foster, complete with the kind of self-hating ableism we see in Silver Age Iron Man and Daredevil comics (“A girl so lovely would never marry a — a lame man!” Don thinks in Journey into Mystery #84). The green rock aliens in this issue could easily be in a random issue of Fantastic Four or really any other book at the time.

Despite a strong start, this first issue ends up feeling very generic. I’ve only read one issue and I’m already chomping at the bit for the big reveal and the subsequent over-the-top space fantasy I’ve come to expect from the Thor franchise. Even calling him “Don,” as I’ve had to do here because that’s all he was at the time, feels super weird.

But you know, I think there’s a lesson here in the importance of specificity in heroes. Even the most cursory study of the history of comics will tell you that Marvel did phenomenally well in the ’60s by churning out new heroes with a reliable formula: a professional pipe-smoking man with an alliterative name gets extraordinary powers somehow, usually via radiation, and has a crush on his secretary. There are variations on this, obviously, but a strong family resemblance across the board.

But Thor didn’t become a really interesting character until he broke free of that mold. Similarly, the cinematic Thor has often suffered when lumped into the increasingly standardized superhero fare the MCU is churning out, rising to his loftiest heights with the elegantly Shakespearean Thor and the gleefully chaotic Thor: Ragnarok — the movies that differ from the standard superhero story.

The superhero genre has its conventions, to be sure, but it’s flexible, whether we’re talking 1960s comics or 21st century films. Thor is a great example of how the genre is at its best when it elevates what is unique about a given character, rather than faithfully following a formula. Here’s hoping that Thor: Love and Thunder keeps Thor as weird as he should be…and if you’re reading the comics, maybe go ahead and skip to 1968 to start.