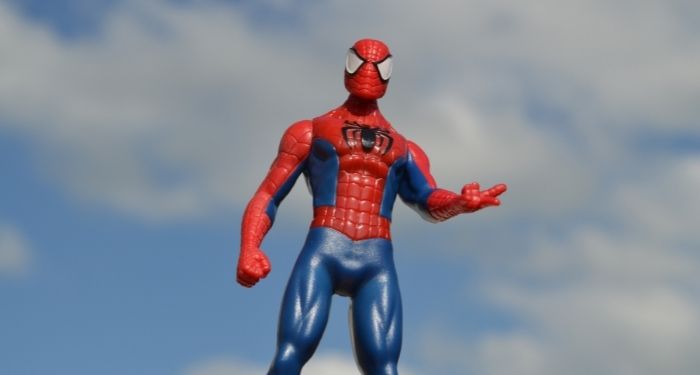 Superheroes have been around a long time, and most of the characters and genre conventions are pretty well established. But did every character always look and act the way we expect them to today? In this series, I’ll be looking at the first appearances of iconic superheroes to see what’s familiar, what’s fallen by the wayside, and what’s goofy as heck. Today: Spider-Man!

Everyone’s favorite nerd, Peter Parker, debuted 59 years ago in Amazing Fantasy #15 (August 1962) and was created by Stan Lee and Steve Ditko. Today he is Marvel’s premiere character and arguably the most beloved, recognizable, and profitable superhero in the world, along with Batman. The third movie in the MCU’s Spider-Man trilogy, No Way Home, hits theaters this month and is likely to be another blockbuster despite, you know, the continuing pandemic. But what was our friendly neighborhood Spider-Man like when he first appeared?

Okay, so obviously this cover is extremely iconic, as any first cover featuring a character as important as Spider-Man would inevitably be. But what I love most about it is that it drills down so succinctly to the heart of what made Peter beloved among nerds. “Though the world may mock Peter Parker, the timid teenager…it will soon marvel at the awesome might of…Spider-Man!” That’s it, that’s the power fantasy. Who wouldn’t relate?

It’s also an interesting cover because it’s so…well, moody. You’d expect a superhero comic from the early ’60s to have a cover full of bright primary colors, but this is mostly brown and gray. Of course, it wasn’t really a superhero comic, as we’ll see. Still, it’s easy to see why preteens and teens outgrowing the child-friendly world of, say, Superman would be drawn to this.

We open with a splash page that’s pretty much what you’d expect: nerdy old Peter Parker being picked on by the cool kids. I’d like to draw your attention to three things:

1. “Spider-Man” is hyphenated (as it is today) in the logo but not the narration box, and not for the rest of the issue.

2. This comic never uses the word “superhero”; instead, they’re called “costume heroes” and “long underwear characters” and sort of dismissed as being common and boring, even in the pages of a story about one of them, which is very much in the Marvel voice — simultaneously braggy and self-deprecating while also a little sneery towards the Distinguished Competition.

3. The bright purple pants on the kid in the middle. Peter, why can’t you be stylish like that?

At least Peter has his Uncle Ben and Aunt May (approximate age: one trillion) to dote on him! This is extremely cute, I’m not gonna lie.

However, Peter’s attempts to socialize at school aren’t met with nearly as much warmth:

What fascinates me about these panels is Peter’s line in the last one. Like, that’s a supervillain comment. It feels like it should be followed with a maniacal laugh. Once again, we’re seeing that this isn’t really the kind of classic superhero fare DC was putting out — it’s notably darker, almost a different genre entirely.

Peter goes to the Science Hall himself, where he witnesses the most hilariously unsafe experiment I’ve ever seen:

I love that even the scientists are bullying him. “Haha, look at that sweater-vested loser! Can’t handle a little radiation being zapped all over the place with zero protective gear! Jim in R&D grew a second head last week and he was fine!”

Peter almost instantly discovers that he has superpowers when he steps outside, is nearly hit by a car, and launches himself ten feet up the side of a building to get away. (The driver of the car, naturally, is more concerned with bullying Peter than marveling at his impressive feat. The entire world’s commitment to making fun of Peter literally all the time is so funny to me. Sorry, Peter.)

A classic DC superhero would use his newfound powers to help mankind. But that’s not what Peter’s about. No, Peter decides to fight a giant naked man made out of Play-Doh, for money:

The guy running the fights sees an opportunity for profit here and offers to get Peter on TV. Peter is all in, and puts together the classic Spider-Man costume, plus his iconic web shooters. The TV special goes well, and Peter is riding high on his success, when he has a fateful encounter:

Once again, we’re seeing that Peter isn’t…uh, a very nice person. But of course, he’s about to learn a valuable lesson.

A devastated Peter, worried the cops won’t be able to apprehend Uncle Ben’s murderer, changes into his Spider-Man costume and heads to the warehouse. It’s child’s play for him to overpower the killer, but then:

And that’s how the very first Spider-Man story ends: with a whimper rather than a bang, although that whimper also includes one of the most famous quotes in all of comics.

Spider-Man adaptations have adhered pretty religiously to the plot of this first issue, so the actual events of the story aren’t really a surprise for anyone even passingly familiar with the character. What is a bit unexpected is the tone. Like I’ve mentioned a couple of times, Peter doesn’t come off as heroic…basically ever? He sounds much more like a resentful budding supervillain throughout, and even though he learns a lesson about selfishness at the end, the only indication that he plans to, you know, do anything about it is a pretty vague narration box about a legend being born, and a promise that “Spiderman” [sic] will return in the next issue of Amazing Fantasy.

(This promise was a lie, by the way — this was the final issue of Amazing Fantasy. In fact, it was the only issue of Amazing Fantasy, since the series had been called Amazing Adventures for issues #1–6 and Amazing Adult Fantasy for issues #7–14, which absolutely sounds like an SFF erotica mag. By all accounts, Amazing Fantasy had already been canceled when this issue was being put together, hence publisher Martin Goodman’s willingness to take a chance on this weird new hero, meaning they knew that caption was a lie when they published it. Even Marvel Editorial is bullying Peter! Luckily, this issue sold so well that seven months later, Marvel launched Peter’s first solo series, The Amazing Spider-Man. They’ll see! They’ll all see!)

Flipping through the rest of the stories in Amazing Fantasy #15 puts the odd tone of this story into context. There are three of them, all very short — a bell ringer who refuses to abandon his post when a volcano threatens his town, a criminal who hides in a sarcophagus to escape the police, a couple who panics when the news alerts them to the presence of Martians in their area. None of them end happily, and two of the three end on an ironic twist (the couple are Martians and their cover’s been blown, etc.).

Peter, laced with bitterness as he is and with his own tragic and ironic ending, is not so much a cousin to Superman and his brethren as to the horror and crime comics that were so popular at the time. Many Silver Age Marvel characters are tinged with horror in this way, especially where radiation and its accompanying Atomic Age fears are invoked — the Hulk! the Thing! the very concept of mutants and the X-Men! — but at least the Fantastic Four are like “Okay, we’ve been turned into monsters, but let’s do something productive with that.” Peter stays dark all the way through.

Of course, that wouldn’t last, and as superheroes became the dominating genre of the medium — helped in no small part by the exciting new characters Marvel was pumping out — Peter’s adventures became more clear-cut superheroic ones, even as he stayed a mopey sad sack who everyone picks on. But it’s fascinating to see what we know as one of the world’s most iconic superheroes emerge from something that is decidedly not a superhero comic in so many ways.

I don’t expect any of this to be in No Way Home except for, you know, the existence of Aunt May and Flash Thompson. But it’s fun to see how far Peter has come — and how capable he clearly still is of screwing things up big-time, according to the trailers. What a loser.

…Oh, hey! Bullying Peter is fun! I totally get it now.