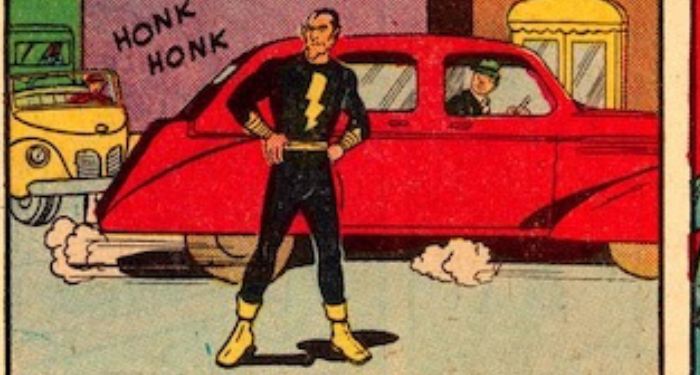 Superheroes have been around a long time, and most of the characters and genre conventions are pretty well established. But did every character always look and act the way we expect them to today? In this series, I’ll be looking at the first appearances of iconic superheroes to see what’s familiar, what’s fallen by the wayside, and what’s goofy as heck. Today: Black Adam!

Black Adam, like all of the Marvel Family, has a complicated history. I’ve written about it at length here, but the short version is that back in the 1940s, a publisher called Fawcett Comics introduced a character named Billy Batson, who could turn into the grown-up hero Captain Marvel by speaking the magic word “Shazam!” The character was a hit and soon outsold Superman, so of course DC promptly tried to sue Fawcett into the ground. While DC and Fawcett were busy in court (this took decades), Marvel Comics went ahead and grabbed the trademark “Captain Marvel.” So DC eventually emerged with the character of Billy Batson/Captain Marvel, but couldn’t use the name “Captain Marvel” as the title of his comics; Marvel owns the trademark “Captain Marvel” but it refers to different characters; and Fawcett, well, went out of business. DC finally gave up in 2011 and renamed their character Shazam, but he’ll be referred to as Captain Marvel throughout this post. It has nothing to do with Marvel Comics, Carol Danvers, or Brie Larson. Got all that? Good, now explain it to me.

Black Adam, the subject of today’s First Appearance Flashback, will be starring in his very own movie on October 21, where he’ll be played by the Rock. This is technically a spinoff of 2019’s Shazam!, although tonally very different, as Black Adam is by turns a villain and a tormented antihero. The movie’s been in the works in one way or another since about 2006, so I’m very interested to see what they’ve finally come up with. But what did this broody, complex, top-tier DC villain look like when he debuted in a Fawcett comic? Let’s take a look!

Black Adam first appeared in The Marvel Family #1 (1945), and was created by Otto Binder and C. C. Beck. Golden Age Captain Marvel comics are still beloved for Beck’s appealingly cartoony art, and looking at this page it’s not hard to see why. That rock bouncing off of Billy’s head! I’m charmed.

The story is narrated to us by Shazam, the mighty wizard who bequeathed his powers to Captain Marvel. He’s telling us the tale by carving it into the Rock of Eternity, the mystic mountain where he lives, so it’s weird that the story is, like, incredibly rambling. If I were carving words into solid rock, I’d want them to be as succinct as possible, you know?

In the present day, Billy has heard about a mysterious object approaching from space, so he decides to discuss it with his friend, newsboy Freddy Freeman, who uses a crutch. This is a great opportunity for Shazam to exposit at length about how Freddy became Captain Marvel, Jr.:

But back to the mysterious object! It’s Black Adam, of course, who arrives in Billy’s city and explains that he has returned to Earth after flying for 5000 years “from the farthest star, where I was banished by old Shazam!” He’s extremely straightforward about his plans:

Black Adam mixes it up with Captain Marvel and Captain Marvel, Jr., but realizing that they are evenly matched, he hides himself in a crowd. He’s savvy enough, however, to spy on the heroes, watch them transform back into relatively helpless boys, and follow them into the abandoned subway tunnel where they go when they need to summon Shazam’s ghost (just go with it).

Finally we get the long-awaited origin of Black Adam, which is that 5000 years ago, Shazam granted powers to a man named Teth-Adam, who he thought was a good dude, but who turned out to be a megalomaniacal jerk. Disappointed, Shazam banished the newly renamed Black Adam to a distant star:

Once the wizard’s ghost vanishes, Black Adam comes out of hiding and promptly gags the boys, preventing them from speaking the magic word that will give them their powers back. Killing them, he figures, will be sufficient revenge against Shazam.

Luckily, at this precise moment, Billy’s twin sister Mary gets a call from his boss, wondering where he is. Mary and loveable comic relief family friend “Uncle Dudley” go looking for Billy (and Freddy) and arrive at the abandoned subway tunnel just in time.

They speak the magic word and transform into: Mary Marvel and Uncle Marvel! Mary can turn into a Marvel just like Billy because that’s how twins work, apparently:

And Dudley…well, Dudley doesn’t have any powers, he just runs around in a Marvel costume. But he’s such a lovable old coot, no one has the heart to argue with him about it. This is actually great and more superhero franchises should have a character like this.

While Mary fights Adam, Dudley frees the boys, and a general free-for-all breaks out:

Meanwhile, Dudley summons Shazam and asks for help. Shazam tells him to get Black Adam to speak his name. Dudley easily tricks Black Adam into doing so, and he transforms into a mortal, who Billy promptly knocks out. Then he withers to a 5000-year-old skeleton and dies right in front of them and no one cares:

What in the heck.

Black Adam would be resurrected 32 years later, after the franchise had been purchased by DC. In the modern era, he has become one of DC’s most popular and complex villains, with a compellingly tragic backstory and motivations that can sometimes seem more reasonable than the supposed heroes’.

Absolutely none of that is on display here, in a story that takes about twice as many pages as necessary, and consists almost entirely of exposition that is being slowly carved into the side of a mountain for some reason. There is nothing in this comic that would make anyone think that this character would have his own feature film 77 years later. It has zero substance.

But friends, that’s art! Every panel is more charming than the last. I would gladly sit through dozens more of Shazam’s pointless meandering mountain-carving stories just to look at C. C. Beck’s delightful work. No wonder DC was threatened!
Black Adam does not look to be appearing in next year’s Shazam!: Fury of the Gods, so it’s anyone’s guess when we’ll see Billy vs. Adam, if ever. Even if it bears no resemblance to this comic, I’m excited for Black Adam, and interested to see where this odd little franchise goes next. Someday you’ll get to bounce a rock off of Billy’s head, Adam! Someday!