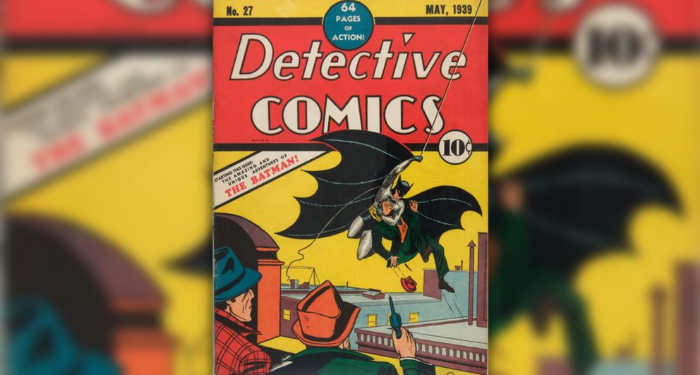 Superheroes have been around a long time, and most of the characters and genre conventions are pretty well established. But did every character always look and act the way we expect them to today? In this series, I’ll be looking at the first appearances of iconic superheroes to see what’s familiar, what’s fallen by the wayside, and what’s goofy as heck. Today: Batman!

Batman is one of our oldest superheroes, debuting in Detective Comics #27 (May 1939). Over the past eight decades, he’s become arguably the world’s biggest superhero as well; along with Superman and Spider-Man, he’s a household name around the world. He certainly boasts the most solo movies to his name, and will be hitting the big screen again on March 4 in The Batman, where he’ll be played by Robert Pattinson. But what was he like when he first showed up? Was he the angst-ridden neurotic we’ve come to know and tolerate because he keeps giving us new Robins? Let’s find out!

And there he is! The cape is much more wing-like than it is today, which makes sense when you consider that he’s supposed to look like a bat, but this is a very recognizable Batman.

Three things strike me as being of interest in these opening panels:

1. Note the “Bob Kane” credit in the first panel. This is incredibly rare for the time, and would remain a rarity for decades to come; creators were basically never credited. Bob Kane was one of the vanishingly few creators to receive both credit and an income for creating the character and not just a simple page rate for stories he worked on directly.

However, that “Bob Kane” is not the whole story. Kane came up with the superhero name and the (originally garishly colored) bat-winged costume, but his colleague Bill Finger would come up with the final scheme, the cowl, the cape, the name “Bruce Wayne,” and later Gotham City, the Batcave, the Batmobile, Robin, Catwoman, and Commissioner Gordon.

But Finger hadn’t negotiated like Kane had, and so he didn’t receive credit like Kane did. When Finger started speaking up about this in the ’60s, Kane categorically denied that Finger had had any input into the character. Finger died penniless in 1974, and though Kane said in his autobiography (published years after Finger was safely dead) that he regretted not giving him credit, even Kane’s truly bonkers tombstone waxes poetic about how God bequeathed the concept of Batman upon Bob Kane and Bob Kane only. It’s a fascinating story which I’m only scratching the surface of here, and very worth reading more about if you’re interested. (There’s even a documentary about it, Batman and Bill.)

2. On a lighter note, the aforementioned Commissioner Gordon is a mainstay of Batman’s adventures, but I didn’t expect him to appear right in the very first panel of actual story along with Bruce himself. That’s a pretty impressive legacy!

3. Wait. He lets this rich weirdo come with him to a crime scene? What the hell, Jim?

They head over to the Lambert house, where Lambert Jr. insists that he’s innocent — he found his father lying on the floor with a knife in his back and the window and safe open. Jim asks if Lambert Sr. had any enemies and Junior mentions his three business partners: Steven Crane, Paul Rogers, and Alfred Stryker. I wonder if the guy with the German name is the bad guy? Comic book names are always so subtle, you know?

Just then the aforementioned Crane calls and says he’s afraid for his life now that Lambert Sr.’s been killed. Gordon agrees to stop by, but Bruce yawns and excuses himself.

We cut to Crane’s home, where he is suddenly shot by a couple of mugs. They snatch a paper from him and escape over the roof, but then:

I’m assuming the guy who Batman threw off the roof is very dead now. The earliest superhero comics weren’t all too concerned with criminal survival, as we see with Superman and Captain America — superheroes weren’t out to kill, but they didn’t work very hard to avoid it, either.

Meanwhile, business partner #2, Rogers, arrives at the home of business partner #3, Stryker. He’s greeted by Stryker’s assistant, Jennings — who promptly hits him over the head and leaves him inside an elaborate and honestly pretty confusing death trap:

I need you to know that Batman plugs the gas jet with a handkerchief. So that’s what he keeps in his utility belt!

Batman knocks Jennings out, and Stryker arrives to see what all the commotion is about — and also tries to kill Rogers and Batman, because he and Jennings were in on it together. Batman explains the very obvious and boring scheme Stryker was using to steal from his business partners, which he learned from the paper he stole from the criminals who themselves stole it from Crane, and Stryker makes a desperate move:

Batman’s only reaction is to say “A fitting ending for his kind” which is very hardboiled or whatever but again shows his complete disinterest in the death of criminals. Also please note Stryker’s immediate assumption that he’ll get the electric chair, which is very common in comics of this era and makes me want to look up how often the death penalty was used in the ’30s but also really, really not.

We wrap up with Commissioner Gordon telling young Bruce Wayne how the case resolved. Bruce scoffs at this “Bat-man,” who is surely just a fairytale, and leaves.

You know, I initially wasn’t all too impressed with this story. The mystery is uninspired, the art is relatively crude compared to, say, Joe Shuster or Jack Kirby, and Bruce has zero personality. Admittedly Kane and Finger only had six pages to work with, but there’s not a lot of there there.

Then I stepped back from my cynical 21st century perspective and remembered that in 1939, if you were reading this story for the first time, you wouldn’t actually have known that the foppish socialite on the first page was The Bat-Man (especially if you were 7 years old and hadn’t read The Scarlet Pimpernel), and suddenly this story gets way better. I want to know what’s up with that guy!

That said, Bruce and Batman and both equally unformed at this point: there’s no gadgets or Batmobile or Robin; there’s no mansion or butler or broody, driven personality. And of course, we’re missing the heart of the character: his parents’ murder and his subsequent vow to dedicate his life to fighting crime. That would come six months later, in Detective Comics #33 (in a story by Bill Finger, further cementing his importance as a Batman creator).

But in this first appearance, there’s not much to show why Batman would rise so much higher than the slew of “mystery men” the nascent comic book industry was starting to pump out, aside from being one of the first out of the gate. Unlike Superman or Spider-Man, where you can immediately see the appeal in their debut issues, Batman’s stardom feels like less of a sure thing.

He would get there, obviously, and I actually kind of love that this first appearance is so nothing. It just goes to show that the development of a character — as well as having the ability to change to suit the times, which no superhero embodies better than Batman — is just as important as that first germ of an idea. And isn’t it in character, really, for Bruce Wayne to play it close to the vest?