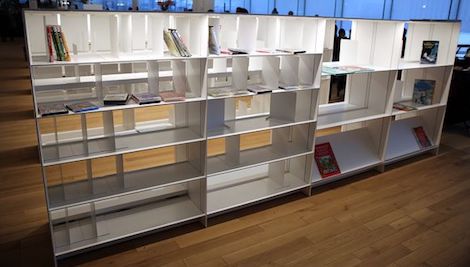 Workers at Oodi, the country’s newest and very popular library in downtown Helsinki, have been unable to keep most of their books on the shelves because so many people are borrowing them.

Around 66,000 books were borrowed from Oodi in December, but the library hadn’t even officially opened until 5 December. Only about half of the borrowed items had been returned by the end of the month.

Talk about loving the library! A true gift to the citizens.

Stilkey’s one-of-a-kind creations range in scale, materializing as both table-top arrangements and monumental installations. While he often experiments with size, he always employs the same subject matter: “a melancholic and at times a whimsical cast of characters inhabiting ambiguous spaces and narratives of fantasy and fairy tales.”

The board of a Kansas public library will reportedly consider a request that books featuring transgender characters be moved out of the children’s section.

Andover, Kan., resident Marci Laffen made the written request, asking that the books “George,” ″Lily and Dunkin,” and “I am Jazz” be moved to the either the adult or young adult section of the library, according to The Associated Press.

The Wichita Eagle noted that Laffen cited the “sexual content” in the books in her request. In addition, she says themes of bullying, rebelling against police and refusing to take medications are reasons the books do not have a place in the children’s section of the Andover Public Library.