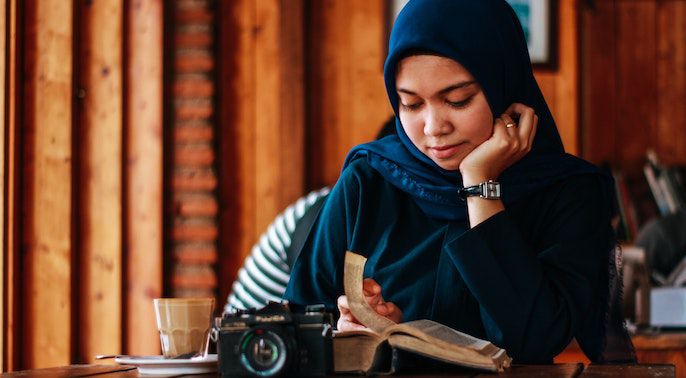 Despite the fact that I have lived in several cities that hold yearly book festivals, I have not attended many. On the bright side, I have really enjoyed the few I have made it to. They have also usually involved a serendipitous discovery or two, including discovering more Somali writers.

The first festival I remember loving is the Texas Book Festival in Austin, Texas. It’s free and its mission is to “inspire Texans of all ages to love reading,” which is an excellent reason to organize any bookish event. While I am not a Texan myself, I appreciated being among Texans who love good writers and good writing. Despite living in Austin for years, I only made it to the festival once. I remember because that year I went to see two authors in particular—Colson Whitehead and Amitav Ghosh. At the time I had read Whitehead’s Sag Harbor, but I must admit I wasn’t a fan then. However, by the time I attended the festival, I had become one. Whitehead had released his novel Zone One that year and Ghosh was talking about River of Smoke, the second book in his historical fiction trilogy Ibis.

One of the lovely perks of attending Austin’s Book Festival is that much of it is held in the State Capitol downtown. Amitav Ghosh spoke in a small, cozy room and the audience seemed to be keenly following everything he had to say. Ghosh is an impressive writer and a polished speaker, and I remember finding his session very interesting. 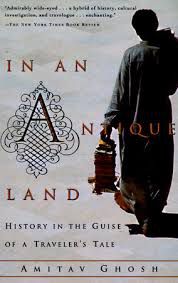 At the time, I had only read his book In an Antique Land, which I absolutely loved. After hearing Ghosh talk about River of Smoke, I eventually read his first book in the Ibis trilogy, Sea of Poppies, which is set in the early 1800s. While I have to admit I enjoyed In an Antique Land more, I was glad to have sampled more of his writing and historical fiction. I also plan to reread In an Antique Land at some point and I think it will live up to my memory of it.

That Zombie Novel from Colson Whitehead

Colson Whitehead’s session was in the Senate Chamber, a room that I found orderly and calming. The room was another serendipitous discovery. It probably helped that the gaggle of people in there were not waiting to hear me do anything. In addition to talking about his reasons for writing Zone One, Whitehead read a passage from it. I enjoyed listening to it not necessarily for his voice—I am a bit picky—but to hear his writing and to revisit the main character Mark Spitz.

Mark is one of the few survivors after a mysterious plague destroys the world as we know it, so basically the usual start for a dystopian novel. Mark’s new normal is what I would term a “craptastic” life. His life is partly crap because he’s fighting plague-infected zombies on a daily basis and partly fantastic because at least he’s still alive. However, Mark and Zone One are so much more than the usual zombie story.

A Zombie Novel for Literary Readers

I highly recommend it, especially to readers who don’t usually enjoy zombie books. Even years after finishing it, I can still remember how much I wanted to understand the new and devastated landscape in which Mark was living. Whitehead’s zombie world was literary, irreverent, and still packed with enough dystopia to make me feel a sense of relief when I took a break from it.

One of the things I love about book festivals is when I make some sort of serendipitous discovery. For example, Whitehead has what I would describe as a high-pitched, dork laugh. It sounds like a cross between a giggle and a chortle—a “gortle” if you will—and I found it made me giggle too. While I am generally a misanthrope, I can attest to the fact that this kind of contagious laughter makes even a grump like me appreciate my fellow human beings once in a while.

A Woman of Firsts

Another book festival I’ve enjoyed is the Emirates Festival of Literature in Dubai. I’ve made it more than once and heard some interesting authors. The 2020 program for the festival included Edna Adan Ismail. I had never heard of her and had no idea who she was. While I did not get to hear her in person, I bought a copy of her book based on the cover and title alone. It’s called A Woman of Firsts: The Midwife who Built a Hospital and Changed the World, and is the story of her life as the first qualified midwife and the first female government minister in Somaliland (which is independent from Somalia). 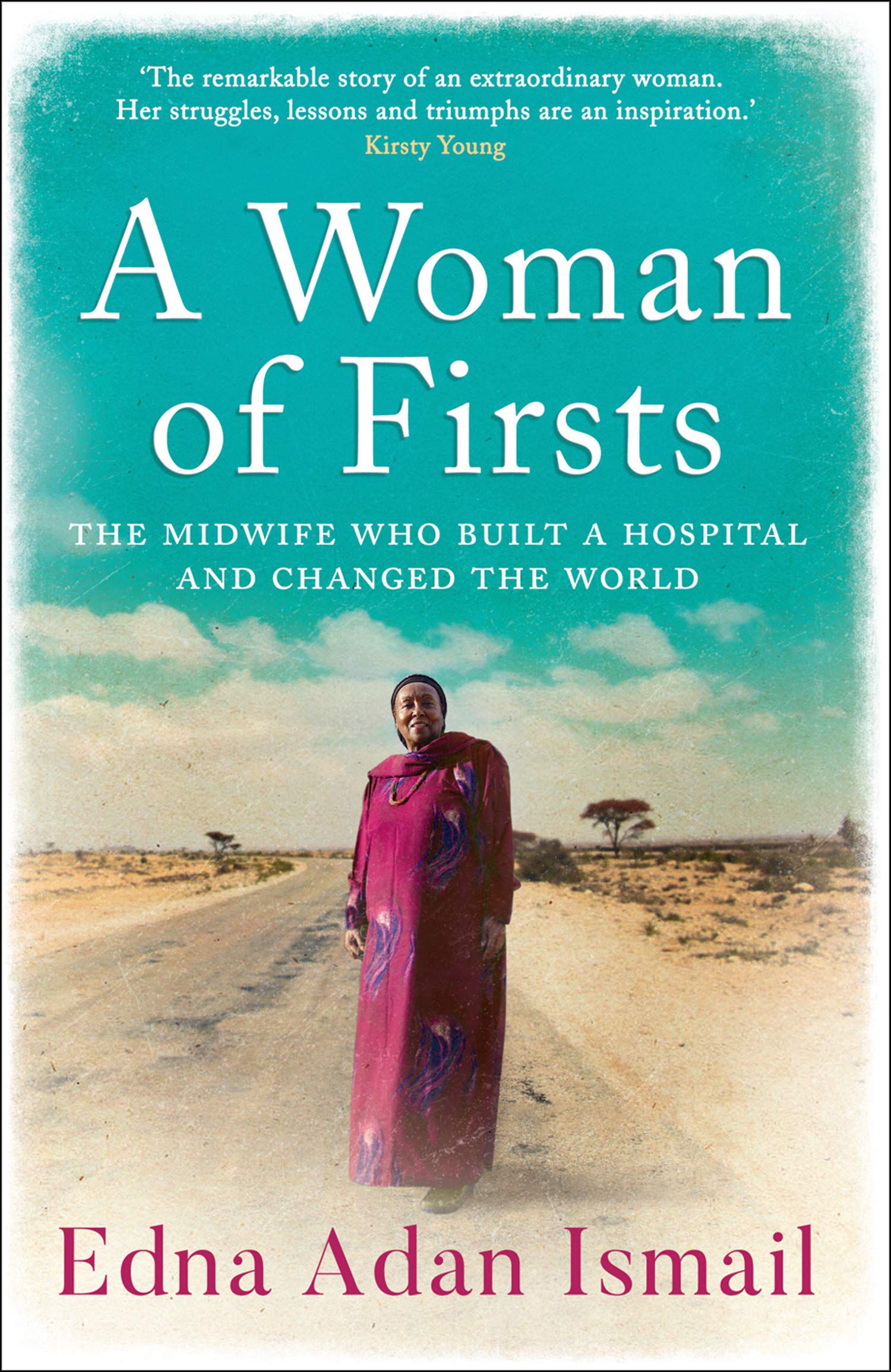 After returning home, I read an interview in The National with Ismail and was glad that I had scooped up her book when I saw it. Apparently, the booksellers sold every last one of the copies that they had brought to the festival venue. Like me, a lot of other readers must be interested in “a woman of firsts” like Ismail. And also like me, there may be others interested in reading a book about Somaliland from a Somali author.

Usually I do not plan my next reads. Over the years I’ve tried planning once or twice but found that I read less as a result (and felt oddly dissatisfied if a book did not fulfill my planned requirements). So generally, I don’t track my reading by country or any other condition, although I can see why others might choose to. 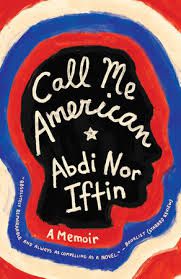 This is of course why I never considered before what I knew about Somaliland, Somalia, and Somali writers. When I looked over my rather long TBR on Goodreads, the only Somali author I had listed is Abdi Nor Iftin for his memoir Call Me American, which is probably there thanks to National Public Radio (NPR—it’s like the BBC but with American accents). I doubt I would have heard of it if not for an interview Iftin recorded with NPR’s Lulu Garcia-Navarro.

I started Iftin’s book but got distracted and had not finished it when I bought Ismail’s book. Now is the perfect time to read both; they are from different generations and have different stories to tell I imagine. 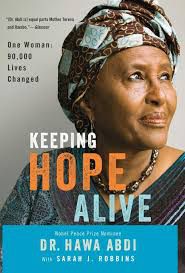 hile looking for more, I found another memoir I had missed from a Somali woman, Dr. Hawa Abdi. Her book was published in 2013 and is called Keeping Hope Alive: How One Somalian Woman Changed 90,000 Lives.

Born in Mogadishu, Dr. Abdi is a human rights activist who created a refugee camp for other Somalis. She now works with her daughter and they provide shelter and medical attention to thousands. Her book certainly looks like a good read too. If you somehow missed this like I did, they also recorded an interview with NPR. 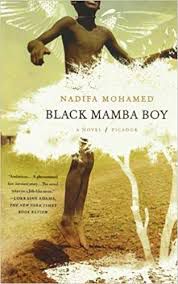 Then Dr. Abdi’s memoir led me to another writer named Nadifa Mohamed. Mohamed’s second book, The Orchard of Lost Souls, is set in Hargeisa (now in Somaliland) in the late 1980s. It follows three different women’s lives before the civil war. Mohamed’s first book, Black Mamba Boy, was shortlisted for the Dylan Thomas Prize and won the Betty Trask Prize in 2010.

Apparently, she was also at the Emirates Festival of Literature in 2019 and I missed her. I do hope I will have another opportunity to hear her in person. In the meantime, I added her books to my TBR.

In the U.S., there is a sizable community of Somalis and Somali Americans in my hometown of Seattle, Washington. As with many minority communities, there is a shortage of books by and for Somalis in the city’s libraries. Before I attended the Emirates Festival of Literature this year, I stumbled across an interesting piece from the Seattle Public Library (SPL). It highlighted the SPL’s efforts to increase the number of Somali books in circulation. This was another serendipitous discovery.

But Somali Books are Hard to Find in the U.S. 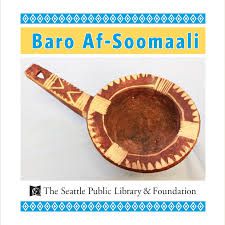 The Seattle Public Library found that purchasing Somali books, especially children’s books, was very difficult. The SPL appreciates the importance of children seeing themselves in what they read, so at the SPL they were determined to increase children’s access to Somali books. To address this problem in recent years, the library has partnered with Somali community members, families, and nonprofit groups to write and publish two new children’s books. One is an alphabet board book Baro Af-Soomaali and the other is a bilingual counting board book Baro Tirinta Af Soomaaliga. They are both available to Seattle patrons as part of the SPL Somali language collection.

These new books expand what is available to all the children using the SPL’s services. They will also provide opportunities for Somali families to teach their children their language and their culture. This does not solely 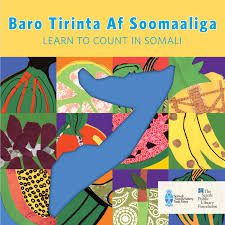 benefit the individuals or families who use these books. It also benefits the larger community.

Children growing up in mixed language households benefit from maintaining their home language while also improving their English. The home language provides a sense of identity, pride, and connection to older generations of their families. It also correlates to higher levels of academic achievement in later education. In other words, kids will do better in school if they maintain and develop their Somali alongside their English.

This is one reason why the SPL wants to add more Somali books. The library celebrated the publication of the alphabet book by inviting families to read it aloud. I imagine it was a joyful event. If you know some budding Somali writers, encourage them to publish their own books. I’ll make some more room on my TBR and some kids in Seattle might like to read them too.