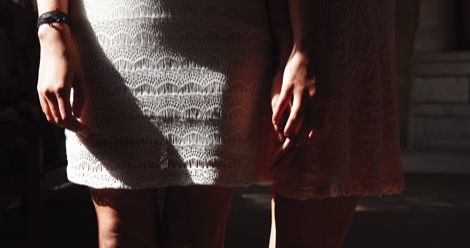 This post on finding queerness through Sylvia Plath is sponsored by She/He/They/Me by Robyn Ryle.

My love for poetry has always been tied with sex and sexuality. This is perhaps the result of me a) being a Scorpio and therefore most things are tied to sex and sexuality, and b) being presented with Sylvia Plath in my teenage years, during which I was angry and unimaginably sad. But mostly I think it’s the result of sharing poetry with the first girl I’d ever kissed.

I was around 16 when I realized that it might not just be boys for me. This was entirely due to my fascination with a girl, one year my senior, who was in the fall underclassmen play with me. Her name was Theresa, and I was obsessed with her.

I had never felt the way I felt about Theresa before, and perhaps have not since. It was the purest of infatuations—I simply wanted to be around her, to have her notice me and take me under her wing. Fortunately, I had an in, a common interest—she and I both liked Sylvia Plath. Poetry to the rescue.

Or perhaps I loved Sylvia because I loved Theresa. I loved Sylvia because Theresa loved Sylvia. I would learn, in-between chaste, exploratory kisses, that she carried her collection of Plath poems in her bag wherever she went. Our discussions of her work lead to discussions about self-harm, emotional vulnerability, feelings of inadequacy. We were all three damaged, emotional girls. Suddenly I felt like there was someone who understood me who wasn’t dead, and she was kissing me with Nutella on her tongue.

But it was more than just Sylvia. My short-lived affair with Theresa was foundational in so many ways. Besides being the first and most sacred queer kiss of my life, Theresa introduced me to myriad new things, and infused my life with a sense of romanticism that I have only ever felt in my relationships with women.

Theresa was secure in her sexuality and brought me into a world in which queerness was beautiful and encouraged. Her social circle was almost entirely LGBTQ, and they were all elegant, well-read, educated about art and foreign film. They escaped the boarding school grounds to smoke in the park and read Oscar Wilde. After high school, they jetted off to Manhattan and beyond. They were involved in theater, spoke openly about sex and had it with a frequency which was impressive to me at the time. They were creative, confident, cool.

It is an aesthetic to which I still aspire. I’m not sure I will ever be as cool as I thought Theresa was back then. I realize now, as I am approaching my thirties and just now feeling like I’m finding my stride both as a creative adult, that a lot of what I have worked towards being, a lot of the selfhood I have created, stems from my infatuation with Theresa. Being around her was the closest I got to being a “cool girl.”

How much of me comes from the first girl I ever kissed? A fair bit.

I don’t consider this a bad thing. All of us are the summation of outside influences, bits and pieces we admired and took for ourselves. These stolen artifacts eventually get incorporated and molded into a cohesive personality, and I’m very pleased with the person I’ve become. I’m proud of my evolution into queerness, my ever-growing confidence and pride, my love for queer art, and the joy I have for the queer community at large. Had I not met Theresa when I did, it would have taken me years to accept that part of myself. As it was, it was simple: there she was, and a new part of me bloomed. Suddenly my life was music, magic, poetry.

The truth is that now I look for queerness in literature and poetry, and I do feel more drawn to work that speaks to these shared experiences and feelings. For me, the queer experience is an inherently artistic one, an existence to be defined outside of the lines, leaving us free to color as we will. When these feelings are written down, the personal becomes universal, and it becomes a medium through which we connect with each other. My relationship with Theresa and the emotional link between her and poetry in my heart set me on a course towards the LGBTQ+ writers that I adore today.

I met up with her again during my freshman year of college, in a small bar in the Village to see a reading with poet Jeffrey McDaniel, then her advisor at Sarah Lawrence. Still, she was so cool, drunk and bathed in red-filtered light, introducing me to a poet I admired like they were friends. Still, poetry to the rescue. Still, it was poetry that connected me to the best version of myself.

I have to consider how lucky I am. Coming to terms with one’s sexuality can be tumultuous for many. I had good friends and a school with a small but outspoken collective of LGBTQ students, and I felt safe there. And I had, and still have, poetry that makes me feel less alone.

I felt joyous about finding myself, and folding in the things that Theresa gave me. I still feel joyous finding poetry that celebrates queerness, and writers who are unashamed in their exploration of the queer experience. I suppose I ought to thank her.