This is a guest post from Angel Cruz. Angel is a 20-something professional enthusiast living and writing in Toronto. She has been blogging about books since May 2011–her favourite genres are magic realism, contemporary fiction, and historical fiction.

You can also find her at Women Write About Comics, reviewing front/backlist books and manga, as well as critically examining Asian representation in both Western and Asian media. Her copy of The Portable Dorothy Parker is paged through more often than is probably healthy. Ice cream, Broadway musicals, and Arashi are her lifeblood. Follow her on Twitter @mermaidvisions. 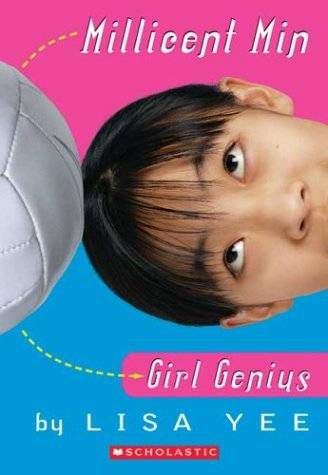 I was 15 when I found my literary doppelganger, and I’ve spent the last decade-plus since trying to find her again.

Millicent Min, Girl Genius by Lisa Yee was more than I could have ever expected it to be, and it gave me the first Asian female character that I could relate to, from the way she struggled with her glasses slipping down the curve of her nose, to the uncanny ability to be the most awkward person in the room.

It wasn’t a well-loved book, not when I found it. Millicent was buried under a teetering stack of paperbacks in a used bookstore, its back cover bent from having been caught between two heavier tomes and its pages yellowed with dust. I almost didn’t buy it—I was 15, practically a lady, and didn’t have time to waste on middle grade books. In the end, I let my usual test decide for me: I read the first page.

You see, I was never Claudia Kishi from the Babysitters Club books, the only other Asian character I found in my childhood books. Her confidence and easy smile were foreign to me, though I wished I could be more like her. Her ability to adapt and fit in with people amazed me, even as I remained a shy, quiet girl. But from the very first page, Millicent Min was like the twin sister I’d never had.

She could be amazingly, frighteningly intelligent. Millicent saw the world as an open book, something to study and understand with single-minded focus. As a kid, I didn’t just want to read stories—I wanted to learn everything. But who wants to talk to a 10-year-old about the historical events that led to both World Wars or the differences between a limerick and a sonnet? Here was a girl who valued learning the way I did, and didn’t feel ashamed of it. Here was a girl who took in facts and let them stand, and never wavered.

She could be awkward. Millicent was an introvert, and I am too, though the experiences that informed those attitudes were different. Her isolation was partly chosen, and partly out of her control, but she was content with that. I was bullied for most of my childhood, and still deal with those scars today. We were both awkward children, unsure of what friendship meant, and trying to figure out how to make friends without losing ourselves.

She could be mean. The thing about focusing only on facts is that it’s easy to forget that they can hurt. Both Millicent and I grew up saying the wrong things, intentionally and unintentionally. She and I both lashed out, frustrated by the world we were living in. She and I both let our own prejudices control our words, and we both learned from the experience.

She could be herself. More than any other childhood heroine, Millicent Min taught me how to be exactly who I was, and love myself. Millicent was the first Asian girl I found in middle-grade and YA literature who muddled through the same mental and emotional potholes as me, and made it through. She held on to her identity as an Asian-American girl even as she learned how to appreciate and accept the people around her.

As I’ve grown up, I’ve remembered Millicent through the countless middle grade and YA novels I’ve read and forgotten. I pick up another story of a teenage girl battling dragons, or falling in love on the steps of the Metropolitan Museum of Art, and I wonder where Millicent is, and what she would think or do. I wonder about the kind of woman she’s grown up to be, and I wonder if we would ever have been friends.

Young adult fiction is filled with girls doing incredible things, but so rarely are those girls short and a little chubby and incredibly frustrated because their glasses just won’t stay up on their small bridgeless noses. Rarely are those girls reflective of the kind of teenage girl I was, that so many Asian girls were. I pass along books to my teenage cousin, and I wish, every single time, that I could give her a book with a protagonist with experiences like hers.

I was 15 when I found Millicent Min, stubborn, precocious, thoughtful Millicent Min, and I’ve spent the last decade-plus since trying to find her again on the shelves.

Maybe she’s living in one of your notebooks, writers. Don’t hide her away. Tell her story. I guarantee that there’s another 15-year-old girl out there looking for her too.