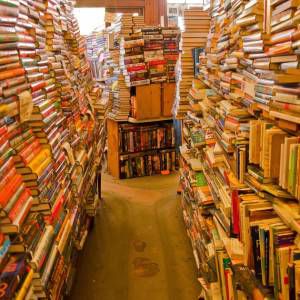 My people are the Garage Sale People—the tribe of the maternal side of my family. Their ceremonial garb includes comfortable walking shoes, a coin purse, and sometimes one of those old-timey green visors worn be people who count money in banks of the Wild West, because Garage Sale People mean business and can’t be bothered by overhead lighting. Obviously. Their totem is the cardboard sign adorned with thick magic marker block letters and balloons. They are legion. Do you know this tribe? Are you one of my people?

Okay, maybe I don’t quite fit in with my people.

I confess I don’t love garage sales the way my great grandaunts did, partly due to the unnatural time of day they usually begin. But I can’t deny that some of my most beloved childhood toys came from garage sales, and I can’t deny my ancestry. For these reasons, I often find myself standing in thrift stores—the corporate cousin of the garage sale—over my lunch hour, panning for the second-hand gold that is an appealing used book. I have sometimes struck it rich. My last trip brought me copies of Neither Wolf Nor Dog (which is being made into film, in case you haven’t heard yet), The Time Traveler’s Wife, Joyland, The Red Tent, Dave Barry Is From Mars and Venus, and Funny Girl, all of which cost me less than ten bucks total. Plus, they were all legit books on my legit literary wish list.

Thrift stores will sometimes surprise you with just what you always wanted, but you might have to work to get the good stuff. You may have to do hard things like crouch for long periods of time, or move the oversized hardcover copies of Donald Rumsfeld’s Known and Unknown (why are there so many unwanted copies of this in thrift stores? Wait. I think I know the answer. Never mind.). You will also have to either push aside or purchase the thousands of Jodi Picoult paperbacks and twice as many Dean Koontz titles, too.

I guess it doesn’t take a lot of intuition to see the link between prolific writers and thrift store bookshelves but it remains a little alarming how predictable the inventory will be on average. Though thrift stores are not above the occasional surprise.

Not long ago, I was at one of my usual gently used haunts when a spine caught my eye among the Ya-Ya Sisterhoods and Purpose Driven Lifes. Even glancing across it, I felt the familiar tug of nostalgia that comes with recognizing a book you read a long time ago but had somehow lost in the shuffle of life (see also: moving at least four times). Finding a copy of a book you once read isn’t such a big deal, but when it’s Vikings: Lord of the Seas, a book you bought at a museum gift shop in Oslo during a family vacation? The deal gets bigger, friends.

I couldn’t believe it; I had to have it. Again. Even though my copy had sat neglected in my bedroom until I moved away to go to college, where it sat neglected in various cardboard boxes for another five years. I didn’t know where my copy had ended up, and even though I had hardly ever flipped through it when I had the chance I suddenly loved it ten times as much as I ever had. The urge to reconnect with a piece of my bookish past was stronger than my understanding of how much room remained on my shelf at home.

I’m not exactly sure why. Nostalgia strikes at odd intervals and at unpredictable strength. As I walked toward the check out I flipped open the cover to find something doubly alarming: my own damn name. In my own damn younger handwriting.

This was my own damn book. I had donated a bag of books and clothes a couple of years ago, and I obviously included this little guy in the pile.

I thought hard about whether this was a mysterious act of destiny or whether my book, which neither I nor anyone else in Minneapolis seemed to want to read, was destined for the island of misfit books. I had given it up once, and I gave it up again. But the next time I pass a lunch hour browsing those shelves, I can’t promise I’d pass it up again.