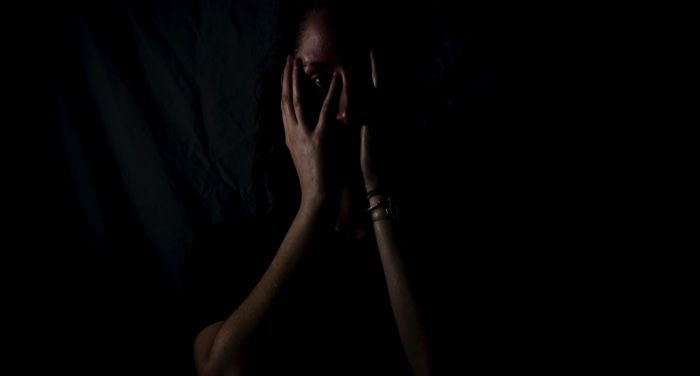 I am a chickenshit. Have been my entire life. I will scream the loudest at jump scares in movies and accidentally in real life — ever opened your front door to walk out at the same exact time someone who lives with you is putting their key in the door? You can hear me scream in espace! This is why I have never really gravitated towards horror. Mysteries, yes! Thrillers, yup! Horror, no thank you. A friend still leaves voicemails singing the Freddy Krueger song and it still scares me! I’m not joking. I am a grownass adult who only buys beds that don’t have space below them and I’ve never owned a shower curtain you can’t see through at all. It’s important to know all this because even though I’ve never been a horror person, I’ve suddenly found myself wanting to read horror. More accurately, craving it like a cold glass bottle of Coke next to a pint of Ben & Jerry’s ice cream.

I spent my birthday sitting on my couch, eating popcorn and streaming a horror film. It was a comedy horror, because let’s not get too carried away, but it’s still enough of a head scratcher that this is what I’ve been gravitating towards. While it was not scary to me as a whole at all, it was filled with jump scares, and every time my popcorn bounced up in the air I thought, “Who am I?!”

I have read some horror in the past, which was more on the side of me dipping my toe into the genre and spurred by my joining Book Riot. Clearly all these horror-loving Rioters had to be on to something? However, most of what I read was very much in the comedy realm or in the bananapants/wtf/weird and not in the scary category. Especially, not in the terror-inducing category.  Also, jump scares don’t really hit the same level in books? I did read a slasher film in book form, which I found entertaining because it hit my mystery-loving brain and I wanted to know the solve. But those books felt more like “I’ll give it a try during the day outside” and “experimental reading” more than anything. I have never ever in any way craved reading horror. That feeling is completely new to me and something that was very confusing. But then I thought about it.

Ever since the 2016 election I’ve felt like I’ve been living in one horror after another. And then the pandemic hit and the “this is the apocalypse” stopped feeling like dark humor and was getting a little too real. And as I am writing this I feel physically ill over the Texas abortion ban. At first, I turned to romance. I have read so much romance the last few years I keep joking that my mystery newsletter is just going to turn into me writing about romances and seeing if anyone notices. But as much as it offers me brief escapes, soul hugs, and a reminder that many people are good, it’s not sufficient.

Where do you place the feeling of terror when you can’t* do anything about the things that are terrorizing you? My brain’s answer appears to be to find fake things to terrorize yourself with. Why? I can’t control the outcome of a book, but I can put it down. I can put it in the freezer. I can skip a chapter. I can even imagine a part differently in my brain than how it’s written.

I can yell at the character about where the danger is and feel like it’s their fault when they don’t listen to me. It wasn’t out of their hands as an individual but rather they brought this upon themselves because they should have run out the front door they were standing next to instead of running upstairs to where they’re cornered after dropping their phone! Yes, I know I’m going heavy on the tropes and horror is a feeling and a gigantic umbrella, but this is what my brain is doing with all of this. It’s also okay to judge a fictional character for making poor choices versus having to understand that real life humans are complicated and have a million factors going on and for the love of — stop saying people deserve what happens to them if they didn’t, for example, evacuate for a hurricane. There are so many reasons people can’t. That fictional character standing next to the door, however, TOTALLY just had to run out the door to be safe.

I want a monster that is a monster and will be punished. Because I want to see and feel justice.

I want to feel scared by something that isn’t real. That can’t be on the news. That can’t be what we used to assume was The Onion headline but is now actually a real headline buried among so many more just like it.

*There are tons of organizations and people who have been fighting for rights and against hate for a long time. Joining, volunteering, giving in any way you can always helps. And there are even ways to help remotely during the pandemic.