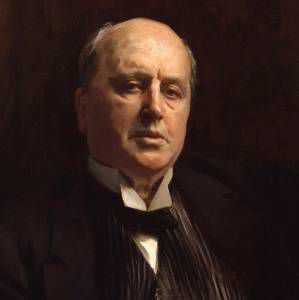 In a little over a week, we’ll mark 99 years since Henry James died. And I’d like to say a few words.

Oh, Henry James, I have such complicated FEELINGS about you. I’m trying to remember which of your novels was my first…hmmm…I think it was The Portrait of a Lady. I must admit, I was impressed. This is the kind of long, encompassing novel that you could read while sitting in a comfy sofa chair and suddenly it’s three hours later and you’re really hungry and cramped and wow you still have 300 pages to go. But it was worth it.

I think I was 15 or 16 when I read that, and since I liked to read a bunch of novels by the same author in a row, I turned to The Golden Bowl. A little strange, a little less enjoyable, but still beautifully written and engrossing. A few years later came The American, Daisy Miller, and The Turn of the Screw, all of which I liked.

And when I say “liked,” I mean that I was glad I had read these novels, and appreciated James’s distinctively subtle and elegant style. But I didn’t love his novels like I love the novels of Edith Wharton, Thomas Mann, or Arthur C. Clarke. When I read James, I always had the nagging thought that I should be sitting with good posture in a really uncomfortable embroidered heirloom chair, stuffed into an ugly dress, and sipping tea. 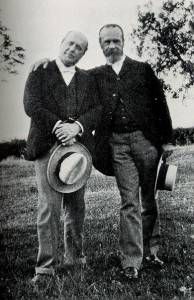 And did I mention how cool I think his brother, William, was? Dude pioneered the discipline and study of psychology in the United States and wrote fascinating essays about science, art, religion, and superstition.

But I digress. I entered college, and from that point until the end of grad school, I was plunged into the Turn of the Screw pit, by which I mean I couldn’t take or teach a course on American literature that didn’t in some way discuss that slim, horrifying novella. That, and The Yellow Wallpaper. Both astonishing texts, but they need a break.

And yet, I somehow never tired of Turn of the Screw, and enjoyed teasing out all the hints and winks that James buried in it.

And then I read The Ambassadors.

I shudder, I grow pale, I feel my stomach twist in knots of dread and horror. I despised that book with every inch of my being while reading it and immediately after. Now, it’s just a dull anger.

Why did I feel so strongly about this unutterably obnoxious novel? Well, part of the problem was my own refusal to DNF ANYTHING. I forced myself to read almost every single book that I started, back in those days, because apparently I was a book-masochist. When I realized, about a quarter of the way through, that I was really hating this example of “late Henry James,” I decided to keep at it, and finish the story despite everything. I’d show that Henry.

Why did I hate it? James plunged me so deeply into the minds of his characters that I realized I was following their convoluted thought-patterns and neuroses as though they were in my own head. James raised this kind of intense omniscient focalization to a whole new level. I couldn’t take it. These characters just sat around ruminating and ruminating and thinking and contradicting themselves and second-guessing their every thought and move that it DROVE. ME. CRAY. ZEE.

Don’t get me wrong- I appreciated the virtuosity of James’s writing, and the evolution of his technique. But this kind of overly-intense examination of not-very-likeable characters turned me off.

I read The Ambassadors on my own during a college break, which means it was over a decade ago. Maybe if I read it again, I’ll feel differently. Maybe. After all, I have re-read novels I’ve hated years later and suddenly loved them.

So if The Ambassadors is one of your favorite novels, you have two choices: you can either take to the comments and rip my reading taste a new one, or you can convince me to give the book a second chance.