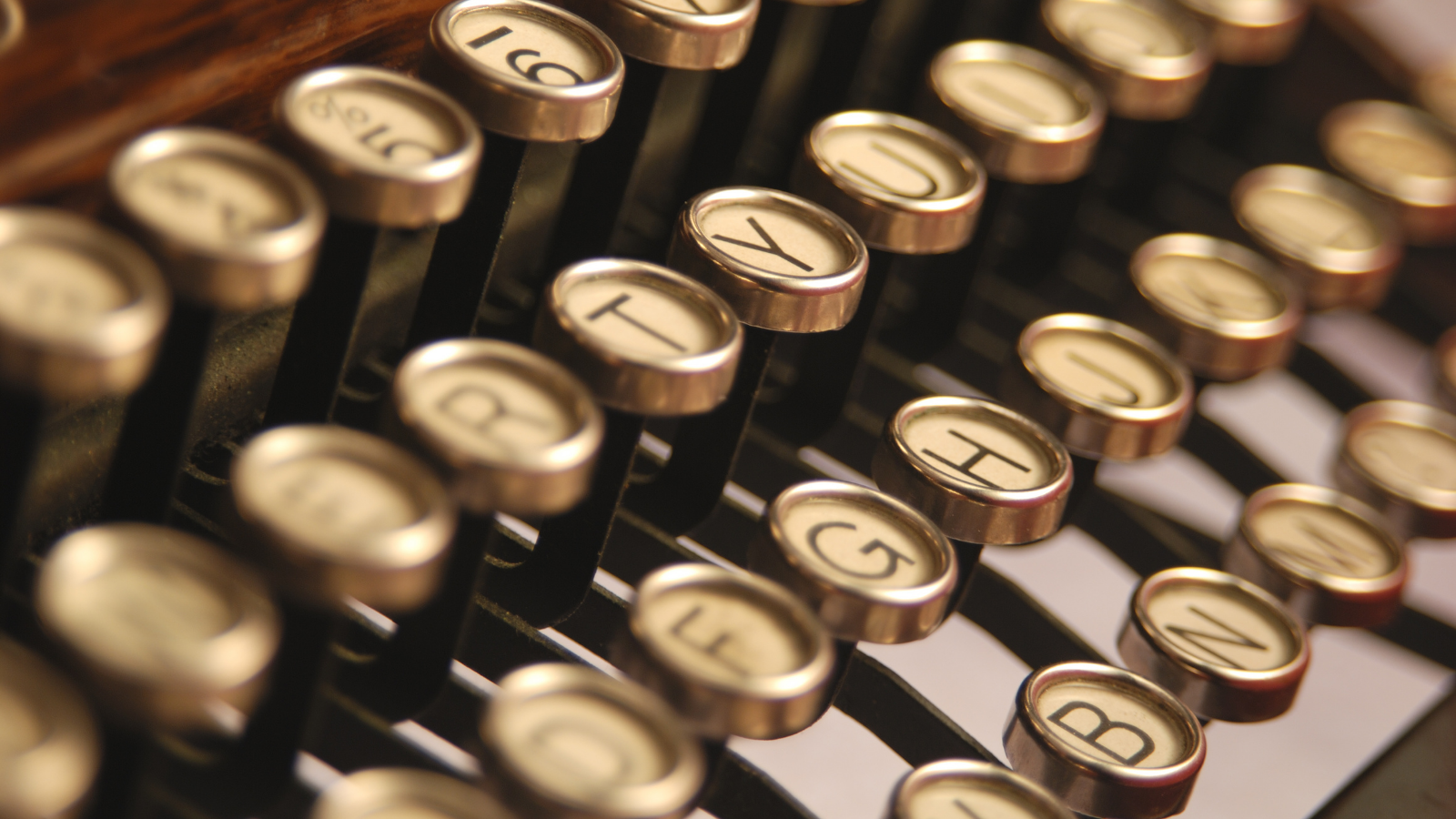 New York City, February 1935. On a cold blustery afternoon, people bundled in coats and scarves are marching in front of the Port City Authority holding up signs. One of them reads “CHILDREN NEED BOOKS. WRITERS NEED A BREAK. WE DEMAND PROJECTS.” The writers shouting into the cold are part of the Writers’ Union protest for writers’ inclusion in the biggest public works program in American history. At the time of the protest, visual artists were already receiving federal funds to paint post office murals and photograph daily life. The protesting writers were out of work and wanted New Deal jobs too.

Soon, though, these men and women would have the chance to join the largest literary project in American history: the Federal Writers’ Project. For eight years, the FWP would support the work of luminaries (Zora Neale Hurston, Ralph Ellison, and John Cheever, to name a few) as well as thousands of other writers.  The FWP created a huge archive of individual stories and fading local cultures that defined Americana in the early twentieth century.

Even Starving Artists Have to Eat

In the 1930s, rising levels of unemployment, poverty, hunger, and homelessness were drowning the so-called American Dream. President Franklin D. Roosevelt’s New Deal was a lifeline in the Great Depression that put millions of Americans back to work. For many workers, New Deal jobs offered a paycheck for the hard physical labor of building roads, bridges, parks, and government offices. But white collar workers needed jobs too. In April 1935, Congress funded what would become the Works Progress Administration (WPA). Part of the WPA’s funding went to a program known as the Federal Arts Project, described in the legislation as “a nation-wide program for useful employment of artists, musicians, actors, entertainers, writers and others in these cultural fields.” For once, even politicians supported the idea that artists shouldn’t actually starve for their work.

Headquartered in Washington, D.C., the Federal Arts Project had offices around the country. The Arts Project had four divisions: Writing, Arts, Theater, and Music. Recruitment for writers cast a wide net. Some who signed on, like Zora Neale Hurston, were already famous. But the Federal Writers Project (FWP) was a jobs program, and unemployment, not talent, was the main qualification. In his book, The Dream and the Deal: The Federal Writers’ Project, 1935–1943, Jerre Mangione wrote that the head of the FWP declared “in addition to experienced writers, the Project would also employ ‘near writers,’ ‘occasional writers,’ and even would-be writers, ‘young college men and women who want to write, probably can write, but lack the opportunity.'” At the FWP’s peak, 6,586 professional and aspiring writers were on the payroll.

So what were these thousands of writers from across the country actually going to create? Apparently, according to Mangione, the FWP rejected the idea that literary minds should churn out government manuals, as “such bureaucratic tasks would only add to the depression of the writers and the nation.” But the feds were wary of letting writers, already perceived as left-leaning and probably secretly Communist, write something as subversive as fiction. Instead, the FWP tasked writers to create travel guides from all then-48 states (plus Alaska and Puerto Rico) and, in the process, gathered oral histories from across America. The FWP research effort was enormous. Besides paid writers, over 12,000 volunteers (mostly academics) helped check and prepare FWP manuscripts. According to The New York Times, by the end of its eight-year run, the FWP had produced  a staggering amount of work: 275 books, 700 pamphlets, and 340 “issuances” (articles, leaflets and radio scripts.)

The American Guide Series created by the FWP is one of the project’s best known contributions. Writers fanned out across the country to gather material for travel guides for every state and several major cities. Yet these were nothing like your usual Lonely Planet guide. If a reader bought one hoping for a solid list of tourist attractions and decent hotels, they were in for a surprise. As Scott Borchert notes in Republic of Detours: How the New Deal Paid Broke Writers to Rediscover America, the guides were full of local history and trivia, “the structure of local government, a state’s literary residents — while they barely mentioned diners, motels, and gas stations. They were rich and weird and frustrating.”

Though they may not have been the most useful books for a weekend getaway, the guides became a trove for historians and readers interested in learning about 1930s America. John Steinbeck, who consulted the guides, wrote in Travels with Charley that the guides are the “most comprehensive account of the United States ever got together…It was compiled during the Depression by the best writers in America, who were, if that is possible, more depressed than any other group while maintaining their inalienable instinct for eating.”

As writers began interviewing individuals for the travel guides, the FWP leadership realized that the interviews were a goldmine of oral history of Americans from a wide variety of backgrounds.  Some historians like Wendy Griswold (in American Guides The Federal Writers’ Project and the Casting of American Culture) interpret the focus on “fading local cultures, which were especially manifest in the lives of the rural, the poorly educated, the less sophisticated Americans” as a part of the elitism of more urbane, educated writers and folklorists. The project would lead to what the Library of Congress calls the “largest body of first-person narratives ever collected in this country.” with over 10,000 interviews recorded for the project. As part of the oral histories, the narratives of over 2,000 formerly enslaved people were added to the federal archives.

From 1936 to 1939, the FWP collected life stories from over 2,300 formerly enslaved African Americans about their life during and after slavery in the south. While some Black writers worked as interviewers in Virginia, Louisiana, and Florida in segregated “Negro Writers’ Units”, most FWP interviewers were southern whites.  In Long Past Slavery: Representing Race in the Federal Writers’ Project, Catherine A. Stewart explains who was doing the interviewing “shaped the story that got told. For example, the presence of white interviewers could constrain elderly African Americans who, in attempting to placate or please their questioners, told happier tales of life under slavery and glossed over the more gruesome and harrowing aspects of enslavement.” On the other side, many white interviewers may have wanted to downplay the atrocities of slavery and justify the ongoing racial segregation in the South. Stewart also questions the quality of transcription, as the white interviewers’ recording of African American dialect was distorted by racist assumptions and stereotypes.

While the interview process was deeply flawed, the FWP generated America’s largest archive of formerly enslaved African American first-person accounts. Thousands of those interviews, along with photographs, are available online at the Library of Congress.

While the FWP was the work of thousands, some of its writers would become the most famous literary names in the twentieth century. Even extremely talented writers faced lean times in the Thirties. Zora Neale Hurston, already famous in literary circles, wrote material for the Florida Guide, much of it from Eatonville, the setting for Their Eyes were Watching God. Young writers who had not yet gained fame enlisted with FWP. John Cheever worked as FWP editor in Washington. Saul Bellow, only 20 years old, wrote profiles of writers like John Dos Passos and Sherwood Anderson. The New York Times quoted Albert Murray, a close friend of Ralph Ellison, as saying “Throughout Invisible Man there are sketches and caricatures of people he met during the Federal Writers’ Project.” Literary stars Margaret Walker, Richard Wright, and poet May Swenson also wrote for the FWP.

Eventually, the FWP and the entire Federal Arts Project crumbled under (mostly unfounded) accusations of Communism by the House Committee on Un-American Activities. Some FWP programs continued under individual state sponsorship from 1939 until 1943, when World War II took over relief efforts. When the project finally folded, Time magazine called it “the biggest literary project in history.”

Now, some in Congress are looking to the FWP as a model for a new jobs program for writers. Representatives Ted Lieu and Teresa Leger Fernández introduced legislation to create a 21st Century Federal Writers’ Project that would put writers to work collecting more stories about America. The program would help some of the 35,000 journalists who have been laid off, as well as underemployed freelance writers. While political will for a new FWP has yet to gather steam, the legislation has support from the Authors Guild, the National Book Foundation, and directors of the Library of Congress.

The FWP Lives On in the Library of Congress

Thanks to librarians at the Library of Congress, many of the FWP works are now online. You can read almost 3,000 documents related to the FWP. There are two major collections: American Life Histories, (first-person accounts) and Born in Slavery: Slave Narratives from the Federal Writers’ Project, 1936 to 1938. Both sections have photographs, transcripts, and even voice actors reading some interviews aloud. Readers today can read the narratives and glimpse the stories, folklore and cultural values that defined the legacy of the FWP.