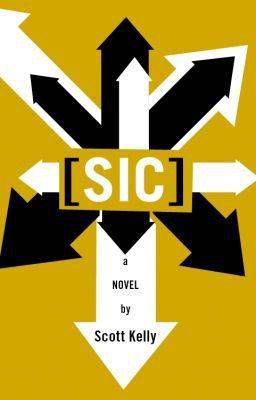 This is an excerpt from Scott Kelly’s novel [sic]. Read more at Wattpad. 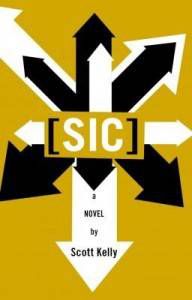 My personal savior is named David Bloom, and presently he’s falling about ten stories from the top of a water tower. And my stupid stunned mind; all I can think is that he looks great doing it. Arms spread, fingertips extended, face serene—homicide by stage dive. His body returns to the earth below, the ten-story drop reducing him to a streak of white and blue cloth, brown hair blown back from closed eyes. Maybe he’s smiling. Maybe I just like to think so.

I can’t see that well. I’m pretty far away, under the cover of some trees, watching through a gap in the leaves. Was supposed to meet someone here.

A masked figure is rushing down the ladder of the tower, half-sliding, spider skittering down a drain. David’s executioner. At least five people, including myself, have a good reason to kill David. Naturally, we’ve all been friends for life.

A good hero would chase the killer.

I run to the place where David fell, like I think he’s still going to be alive, somehow. Stupid. What I get instead shocks me, makes my legs weak and my breath feel worthless. David is no more. This is his face on a sack of meat and bone, limbs bent and bones snapped. This guy—this guy who showed me the light, now just a coffin’s worth of flesh.

Still, though. Face frozen in that serene stare. Still looking as good as he possibly can. Not saying much.

The wet breeze of an incoming cold front sweeps across the woods, and a swarm of blackbirds rises from the trees. If one white dove carries an average soul to Heaven during a funeral, this is a good start. Every grackle in Texas should be heading to the moon. He was a criminal, a drifter, an egomaniac. And my friend.

David was obsessed with finding out what we really were, what a person amounted to when you stripped away all the influences, all the conditioning, all the clutter. To find each person’s core, he invented a game meant to be played by small groups of people.

The game is called Eureka and there’s only one rule. Eureka is played like tag, except when touched, you have to change your life in fifteen minutes. You do this by committing an act which will affect your future in a way you hadn’t previously planned. The more consequences the act carries, the better player you are.

Your goals, relationships, and belongings are the cost of entry. Play long enough and life finally becomes about living, rather than some illusion of progress. No attachment to anything except the value of your own continuously thrilling existence.

I’ve been in a game for Eureka for the past five years, and I’ve been forced to make changes. I’ve sacrificed what I thought I loved, relearned what love was, and, most importantly, learned identities didn’t have to be something you bargained for.

The game never stops. One of the other five players could tag me, force me to change my life. Anytime, anywhere. Lets me see the real value of things.

It’s how I lost the girl I love.

I pace back and forth around his body, trying not to look but finding myself unable to resist. Still horrifying. Still a puddle of David’s parts.

I realize that, for a variety of reasons—not the least of which being, I’m the only one standing around his corpse—I will be blamed for pushing him off the water tower.

Well, I blame the death of David Bloom on the weight of his presence. I expected the ground to tremble under his power, but that didn’t happen. No split Earth, core leaking like yolk. No torn ground, but no less of an impact. The dead body is a collapsed star, and the resulting black hole will pull investigators, parents, and the community into his personal reality. I’ve been in it for years, so I have one advantage.

I close my eyes and inhale slowly, dreading what comes next. I crouch next to David’s corpse and reach a hand into his pocket, trying to avoid all contact with my dead friend’s flesh. I can’t help nudging him slightly; he shifts limply; a shattered arm bends backward. Sick. I yank the cell phone he carries from his pocket.

The phone works; I call nine-one-one. “There’s a dead body at the water tower next to the Kingwood High football field.” My voice cracks. Putting words to this somehow makes things worse.