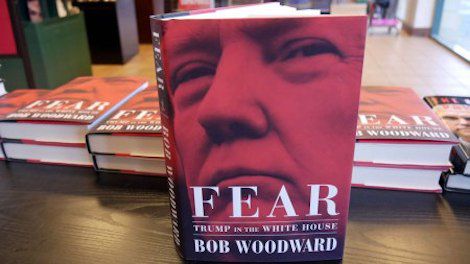 Sponsored by Burning Down The Haus: Punk Rock, Revolution, and the Fall of the Berlin Wall by Tim Mohr.

“Fear” came out on Tuesday. And it is already one of the top selling books of the year — not just on the politics shelf of the bookstore, but in the entire store.

On Wednesday, Barnes & Noble said “Fear” has had the “fastest sales for an adult title since Harper Lee’s ‘Go Set a Watchman’ was released in July 2015.”

The bookseller called the pace of sales “phenomenal” and “amazing.”

Not at all surprising!

I'm thrilled to tell y'all @netflix is releasing Dumplin', a movie I've been working on with some very talented folks💕

The soundtrack releases worldwide Nov. 30th & the film will be out later this year! Stay tuned! 😊 https://t.co/jR9UxOZKcq

Dumplin’ is going to Netflix!

Convinced that the building’s walls came from the Roman period, the structure’s configuration and layout puzzled the excavation team—small niches measuring 80cm by 50cm (31in by 20in) were found all throughout the site and archaeologists sensed they may have discovered something special. Last week, they finally confirmed they had dug up the remains of a 2,000-year-old library.

This is just the coolest.