This Riot Recommendation of best school novels is sponsored by School for Psychics by K. C. Archer. 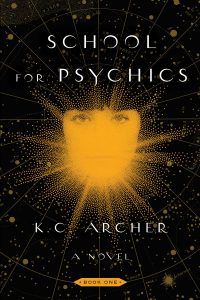 School for Psychics is the first book in a new series starring a young woman with extraordinary abilities who must decide whether she will use her skills for good—or not.

Teddy Cannon isn’t your typical twenty-something woman. She’s resourceful, bright, scrappy. She’s also psychic. After a series of bad decisions and a run-in with the police, she finds herself at an elite facility where students are trained to use their skills to protect America, and the world.

But just as Teddy feels like she’s found where she belongs, a dangerous mission causes her to question everything…

Hello, recovering doctoral student here. I would not go back to being a student for all the money in the world. Wait, that’s really hyperbolic. Let me interrogate that feeling…Yep. Totally accurate. But! I do like to read about fictional school experiences. All the angst and triumphs with none of the homework or tuition. I asked for your favorite school novels, and you turned in some great picks!

To Serve Them All My Days by R. F. Delderfield

Colors of the Mountain by Da Chen

The Catcher in the Rye by J. D. Salinger

Waking the Moon by Elizabeth Hand

The Secrets of Flight by Maggie Leffler

The Trebizon series by Anne Digby

The Daring Game by Kit Pearson

Up the Down Staircase by Bel Kaufman

I Heard the Owl Call My Name by Margaret Craven

The Zucchini Warriors by Gordon Korman