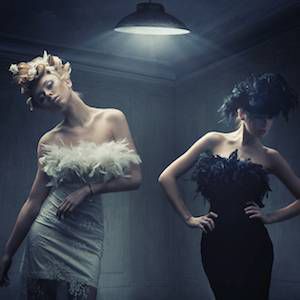 This Riot Recommendation is sponsored by Material Girls by Elaine Dimopoulos. 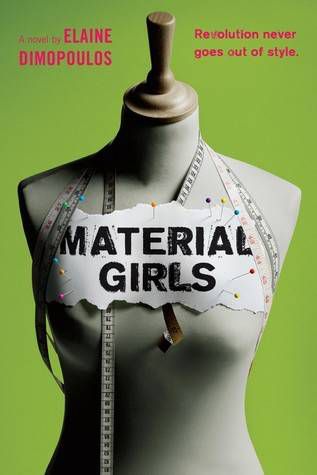 In Marla Klein and Ivy Wilde’s world, teens are the gatekeepers of culture. A top fashion label employs sixteen-year-old Marla to dictate hot new clothing trends, while Ivy, a teen pop star, popularizes the garments that Marla approves. Both girls are pawns in a calculated but seductive system of corporate control, and both begin to question their world’s aggressive levels of consumption. Will their new “eco-chic” trend subversively resist and overturn the industry that controls every part of their lives?

Smart, provocative, and entertaining, this thrilling page-turner for teens questions the cult like mentality of fame and fashion. Are you in or are you out?

The fashion industry is a great deal like the book industry: it’s about art and creativity and standing out, but it’s also about money and marketing and fitting in. That tension can create ruthlessness, and a level of cut-throat competition you wouldn’t expect from an art-based business- and that tension makes for excellent reading. From compulsively readable fiction (hello, The Devil Wears Prada) to insider memoirs (the memoir of Grace Coddington from Vogue comes to mind), to how-tos, we wanted to know: what’s your favorite book about fashion?

We rounded up your suggested titles and built you a nice list of 48+ great books about fashion. Get ready to work it while you read it. There’s something here for everyone, from fiction fans to those who like a non-fiction pick about how to rock your threads.

50 Dresses That Changed The World by Design Museum

101 Things I Learned In Fashion School by Alfred Cabrera

Alexander McQueen: Blood Beneath the Skin by Andrew Wilson

Coco Chanel: The Legend and the Life by Justine Picardie

Confessions of a Shopaholic series by Sophie Kinsella

Dreaming of Dior by Charlotte Smith

The Fashionable Mind by Kennedy Fraser

From the Memoirs of a Non-Enemy Combatant by Alex Gilvarry

In Her Shoes by Jennifer Weiner

In My Shoes: A Memoir by Tamara Mellon

Isabella Blow: A Life in Fashion by Lauren Crowe

It’s So You by Michelle Tea

Just Being Audrey by Margaret Cardillo

The Ladies’ Paradise by Émile Zola

Manolo Blahnik and the Tale of the Elves and the Shoemaker: A Fashion Fairy Tale Memoir by Camilla Morton

Revenge of the Girl With the Great Personality by Elizabeth Eulberg

Rookie Yearbook One (and Two and Three) by Tavi Gevinson

The Secret Lives of Dresses by Erin McKean

The Sisterhood of the Traveling Pants series by Ann Brashares

Target Underwear and a Vera Wang Gown by Adena Halpern

Tim Gunn’s Fashion Bible: The History of Everything in Your Closet by Tim Gunn

To Die For: Is Fashion Wearing Out The World? by Lucy Siegle

The Truth About Style by Stacy London

Valentino: At the Emperor’s Table by André Leon Talley and Valentino Garavani

A Vintage Affair by Isabell Wolff

What Not to Wear by Trinny Woodall and Susannah Constantine

The Woman I Wanted to Be by Diane Von Furstenberg

Women in Clothes by Sheila Heti