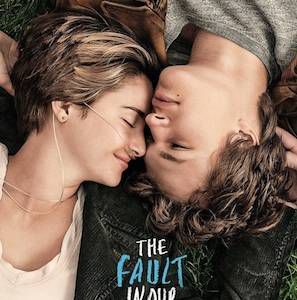 Full disclosure. I’ve read the book twice now. Both times I cried frequently and was gobsmacked by the gorgeousness of the scenes and relationships and both times I thought the dialogue was trying, like, a LITTLE too hard. That hamartia section sounds like two Wikipedia entries talking to each other.  That’s my gripe, it’s small but it’s not insignificant. I’m done now. Let’s run down this trailer!

:10- Shailene Woodley does voice over. She has the crackliest, gravel-iest, honey-smoked voice. She can do voice over for my life.

:17- Is the Peter Gabriel song reference in the book? I don’t remember it. Also, are you allowed to make a reference to Peter Gabriel if you’re born after the year 1990? Discuss.

:24: First shot of Hazel Grace with her nasal cannula. She trendies up her oxygen tank with a jean jacket. Points, girl.

:31 We go through the motions of Hazel’s mets-in-her-lungs life and then we get MIKE BIRBIGLIA MY FAVORITE COMEDIAN BESIDES ELLEN playing guitar and singing God songs. Yes, he’s playing my least favorite character in the book, the cancer support group leader who “doesn’t get it.” How come therapists and counselors never “get it” in fiction? Plenty of them “get it” in real life, thanks to their education and years of experience and ability to listen and read the room and empathize with other human beings. I’m getting off track. I hate this trope but I love Birbiglia so we’re square TFIOS. Okay? Okay.

(I’m going to try to do that eight more times before this rundown is through.)

:48- John Green’s name flashes across the screen and girls across America have to go home and change their panties.

:51- I’m so glad Laura Dern is the mom in this. As much as I hate the “mental health worker who doesn’t get it” trope used in this story, I love that both parents really DO get it. The mom character is awesome-sauce and am glad we get a worthy actress in the role.

1:00- I’m obsessed with the parent-child banter in this film/book story. If it was just two hours of Shailene Woodley Dinner With Andre-ing it up with Laura Dern and Sam Trammell, that would be A-OK.

1:03- Nevermind, I lied, strike that from the record, I completely forgot how cute Ansel Elgort is as Augustus Waters, can we instead do two hours of him smiling crookedly?

1:12- Is Ansel Elgort the son of the Apollo? I’m serious, this is a real question.

1:35- I actually have a huge problem with this cigarette scene in the book, it feels pretentious and blowhard-y even for Gus (who’s an adorably pretentious blowhard, but a hundred percent is one all the same) but Elgort almost makes it work. He’s just so good at facial expressions and hand gestures.

1:50- Love these vignettes of Gus and Hazel falling in love but am getting annoyed with the fake folk song playing in the background. How much longer does fake folk have to be a genre for? Can real folk come back into style?

1:53: I want to stuff a sock in my mouth and shut up about how cute Ansel Elgort is but he keeps doing things like wearing basketball jerseys while carrying tulips and I forget how I was going to finish this sentence I was typing.

2:00: The next thirty seconds are so romantic I’m afraid that if I look in a mirror I will see that my eyes have been permanently replaced with cartoon hearts.

2:35: It’s like a weird thing to say that you like watching an awkward foreplay scene between two teenagers? Well, I didn’t say it, I just asked it as A QUESTION.

3:00-I’m going to cry so hard during this movie I’m going to turn the theater into Water World. So don’t see this movie in the same theater as me unless you have, like, an ark.

What do we think of the trailer? Tell me in the comments, okay? OKAY.