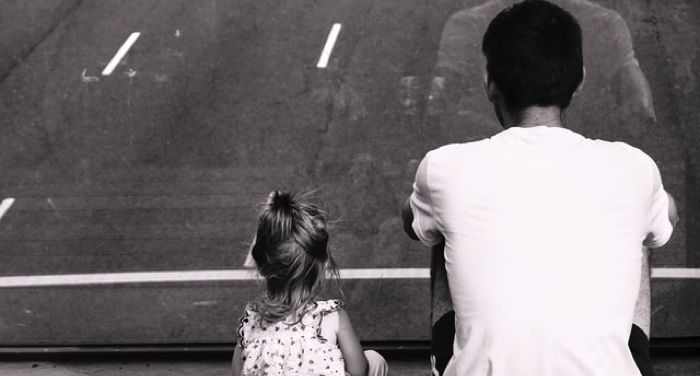 A memory decided to resurface the other day during a conversation with a friend. It was of a tradition my father and I had when I was 3 or 4. We’d go to the attic of our little house in Atlanta and he’d read the Bible to me while we ate pistachios. Thinking of the scene makes me chuckle a bit. Imagine: a man trying to read the Bible with a tiny female version of himself peering up at him, confused and fidgeting, at times too busy picking pistachios out of their shells to give anything else too much thought. I’m assuming he was reading one of the many children’s Bibles I was always being gifted between the ages of 1 and 10 — courtesy of growing up in the south, no doubt. Although, I’m not totally sure of this, as I can also easily see him reading the King James version very seriously to a child in a thick Franco-Nigerian accent.

When my parents parted, the separation was bitter. I didn’t have contact with my father for years. What I did have, though, were my children’s Bibles. I poured over them many nights, comforted by the stories that reminded me of my father and had, by then, become familiar. Many memories from that far back exist now as little more than fragments, but I can still very clearly picture the short, square and thick books that contained so many magical stories told with colorful pictures. I reread them so many times that I can still recount many of the stories despite having never read the Bible as an adult.

The idea of children inheriting their parents’ interests, reading or otherwise, makes a lot of sense.  After all, not only can personalities be passed through genes, but children often emulate behavior modeled by their parents. With all of this in mind, I still had never before tied my reading habits to time I spent with my father. My recent analysis of this memory has made me realize that witnessing my father treating not only reading, but reading the Bible specifically, as a precious ritual has nestled itself into my subconscious and influenced my reading habits in some interesting ways.

For one, there’s the obvious love I have for reading and books that I’ve had for as long as I can remember. Having been exposed to reading in such a pleasant environment makes me think of the act, and everything associated with it, with a warm familiarity. And, although I don’t identify as Christian, those early Bible-reading sessions have greatly influenced my spirituality. Perhaps surprisingly, though, is how the content of what my father read to me has been interpreted and translated into my current interests. The Biblical stories I was presented with were my introductions to magical worlds and the idea of doing good for others. These are things that are central to so many science fiction and fantasy books, genres I’ve always gravitated towards. I now know that there is a direct connection between my great love of mythology, magic, and lore and that time I spent with my father.

After graduating from my children’s Bibles, I remember loving books like C.S. Lewis’s The Lion, the Witch, and the Wardrobe. In it, the character Aslan sacrifices himself and is later resurrected in an obvious ode to Jesus Christ. Similarly, in A Wrinkle in Time, Meg Murry’s fight against good and evil, as well as the lessons on letting go of the expectations of knowing everything in the vast universe, mirrored the triumph over darkness as well as the unknowableness of God. The theme of the nature of father-daughter relationships explored through Meg and her father also hit very close to home.

A lot of the fiction I naturally gravitate towards as an adult still has many of these themes. One of my favorite genres, southern gothic, expresses some of these Biblical elements in a darker context, marrying my familiarity with Christianity to my experiences growing up Black in the south. Books like Beloved and Song of Solomon by Toni Morrison hold the stories of hoodoo and haints I had grown up hearing from my mother’s side and express both the inherent beauty I know the south to have, as well as its abject horrors.

Although we’ve been reconnected for years now and speak somewhat regularly, my father and I never resumed our tradition. It remains in the annals of my memory in its own little pistachio-flavored bubble. Its influence, however, lives through me whenever I seek out books based in some mythology, the magic promised within to be both comforting and somewhat familial.