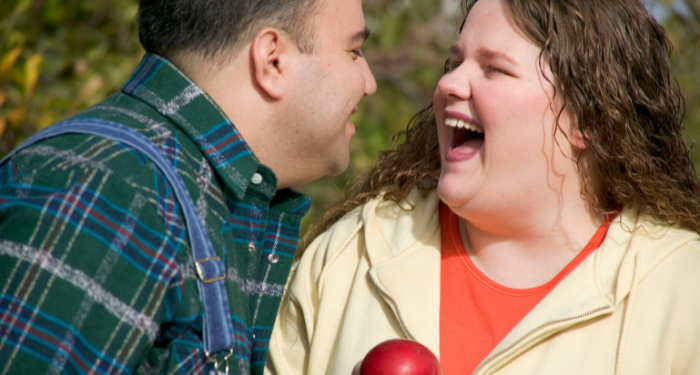 I love romance novels. I’ve loved them since reading my great-grandmother’s Georgette Heyer novels in middle school and then discovering my mother’s secret supply of Nora Roberts and Julie Garwood paperbacks. I love only one bed, secret babies, road trips, and elopements gone wrong. I will never get tired of fake dating stories (although publishing is doing its best to test this limit). And I eat up friends to lovers, enemies to lovers, second chance romances, and soulmate stories. I love romance novels.

Romance gets shit on a lot. People call romance novels predictable, formulaic, poorly written, anti-feminist, and a genre that creates unrealistic expectations for women (i.e orgasms and/or respect). And these people almost never have even read a romance novel beyond Fifty Shades of Grey or maybe Outlander. In the romance community, we are so used to bad takes and critiques from people that don’t read, write, or love this genre. But I ask the question: where are the fat heroes and love interests in romance novels? This question is not just a question, but also a critique and, perhaps, a call to action. As I ask this, I want you to remember that I love romance novels. I have read hundreds, if not thousands of them. This call is coming from inside the house.

Representation in Romance Is About Who Gets a Happily Ever After

The reason it’s so important to diversify romance novels, in all ways, is because these stories help culturally define who deserves a happily ever after. These stories also signal who is worthy of being considered sexually attractive and receiving sexual pleasure. Literature, from all genres, has a long history of coding fat characters as automatically unattractive. Fat is often shorthand for characters being stupid, lazy, villainous, non-sexual, or supporting characters.

Romance novels have a long history of fatphobia. Old school historical romances, in particular, are filled with heroines whose waists are so small the heroes can encircle them with just their hands. Contemporary romances feature near-constant diet culture, makeover stories, and praise of small bodies. Listen, I still love a lot of these books. There are some I can acknowledge the problems in and move on and others which cross a line for me. The same is true for other problematic elements in romance novels. But these books sent a clear cultural message about who deserved romance, and it was straight, thin, non-disabled, and mostly white characters. Diversity in romance characters and authors has been growing steadily. But, when it comes to representation of all kinds, the romance genre still has a long way to go.

I’ve written before about how seeing fat heroines in romance novels was an incredibly meaningful experience for me. Romance novels were a way that I tried out and fantasized about romantic and sexual relationships before I was ready for them in real life. Growing up steeped in diet culture and disordered eating, the experience of reading about fat women fall in love changed the way I thought about my body and my sexuality.

Fat romance heroines are still a relatively new phenomenon. Many consider Bet Me by Jennifer Crusie from 2004 an early example of a fat romance heroine. And that is less than 20 years ago. Furthermore, not all romance novels with fat heroines include positive representation. Still, there are so many more authors writing amazing fat heroines right now than ever before. And there is almost nothing I love more than seeing fat female characters fall in love. But, even as I love these stories, they follow a trend of fat heroines who are paired with thin, physically fit heroes. This matchup has become normalized and celebrated within the romance genre. It represents a huge step forward in terms of fat representation. However, a problematic double standard persists when it comes to the lack of fat male romance heroes.

Where Are the Fat Romance Heroes in Books?

Before preparing for this article, I don’t think I’d ever read a romance with a fat man as the hero. Xeni by Rebekkah Weatherspoon stands out as one of the few romance novels that seems to get this right. The hero, Mason, is fat, but being fat is not his main personality trait or a huge cause for concern in the story. Weather Girl by Rachel Lynn Solomon is another good example of this. Russell is a fat sports reporter and single father. While some fatphobia is present in the story, it’s background noise to the romance happening on the page. Talia Hibbert’s novella Guarding Temptation, Hefty by Jessa Kane, and The Lady’s Champion by Marie Lipscomb also are examples of fat male characters as romance heroes. In queer romance, the novella Their Troublesome Crush by Xan West and Stripped by K.M. Neuhold also feature fat men as love interests.

The fact that after some serious hunting I could only find seven books featuring fat male heroes is telling. The majority of these books are self-published or published by small, independent presses. Many of the male characters were former athletes or sports-adjacent (which seems to present a different bias that it’s only okay for characters to be fat if they are physically strong or exercise). And only two of the books, The Lady’s Champion and Troublesome Crush, feature stories where both love interests were fat. I don’t say any of this to call out these books or these authors. These books were great, and you should read them. I salute the authors writing these stories and hope there are more of them soon. However, romance publishing has a long way to go when it comes to representing fat men as romance heroes.

Romance novels have long used the physical archetype of tall, thin, or straight sized, muscular men to instantly communicate with readers who the hero is and why he is worthy of love and attraction. Tall, dark, and handsome is a cliché for a reason. Descriptions of washboard abs and six packs abound inside romance novels. Most romance heroes have little physical variation between their physiques. Heroes have different hair colors, eye colors, and increasingly are different races and ethnicities. They might have a beard or not, have chest hair or not, or perhaps even have a scar. But there seems to be an unwritten rule that the vast majority of romance heroes cannot be overweight or short (height being a whole other story for men in romance novels).

There is a message of internalized fatphobia present when we think that fat women can serve as love interests, but not fat men. I understand seeing a fat woman with a physically fit, conventionally attractive man can be a hugely satisfying pairing. This feels especially true when we think about how the opposite is more present in film and television, where fat actors are more likely to be matched with thin actresses than vice versa. Women in Hollywood and throughout society have had the most restrictive beauty and body standards forced upon them. Seeing fat women as beautiful, sexy, and lovable is a radical act that does deserve celebration.

But when fat women are only considered love interests when thin men desire them, that is not true fat acceptance or body positivity. This formula too often treats men as trophies to be won, instead of partners to be cherished. And sometimes it feels like there is a message that fat romance heroines are “not like other fats.” Would these women be seen as less attractive if they were being pursued by fat heroes instead? For a lot of readers still working through their own body image issues (I’ll include myself in this, even as I’m working on it), I’m afraid the answer is yes.

Queer romance novels often repeat this dynamic by usually having at least one love interest be thin within same gender pairings. In a recent article in Fat Studies: An Interdisciplinary Journal of Body Weight and Society, Shana McDavis-Conway discussed this trend, stating: “Most queer romance publishers have prioritized books that replicate the body size and racial homogeneity of their larger traditional peers.” Just like in straight romance stories, there are exceptions. But the books that get the most attention and support from publishers continue to feature a minimum of one thin love interest within queer romance novels.

I am a fat woman who has been attracted to fat men several times, and yet I’ve rarely seen this dynamic portrayed in the romance novels I read. Liking thin and fit bodies more than other bodies for both genders is not solely a matter of personal preference. It’s upholding a societal standard that some bodies are better than others. We’re taught to place a moral value on thin, fit, and healthy bodies. But we rarely think about the “health” of thin characters in books (see: heroes drinking, smoking, or making a plethora of other “unhealthy” choices on the page and not having that detract from their sexiness as long as they have a six pack). This is a hugely divisive issue within the romance community. But there is definitely a line here to walk between not shaming ourselves for our fantasies, while challenging our own biases.

I’m not blaming any individual authors on this issue. Especially not the authors who are pushing and fighting to make a space for fat women in romance novels…which we also still need more of. But I also want to read more romances with fat men as heroes. And short men. Disabled men. Men who are thin but not physically fit. I want all of it. And publishers, authors, and especially audiences are going to have to work together to make room for these stories on our bookshelves and in our hearts.