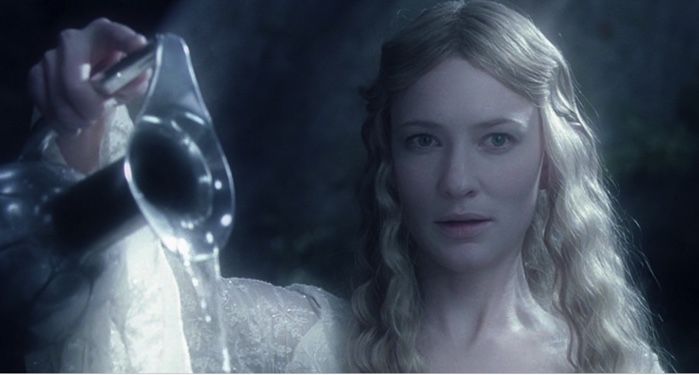 I think about the monologue Miranda Priestly delivered to Andy Sachs in the film adaptation of The Devil Wears Prada a comical amount of times, particularly when I’m hunting around a “tragic casual corner,” debating the difference between turquoise and cerulean.

Fashion, whether we have that coveted “taste” or “French girl aesthetic” or not, is what we live in. What we wear is a statement of who we are. Choosing not to worry about what you wear is also a fashion statement. You’re still saying something about yourself and in turn telling the world what to think of you.

Fantasy authors use fashion to symbolize what their characters stand for in the world of the story. There is the direct symbolism of a peasant wearing rags, showcasing their socioeconomic status. There is also use of different colors to relay emotions, such as gold for wealth or white for purity. And how many stories have used a piece of jewelry to symbolize or evoke a memory? In less than a sentence, a fashion statement can tell readers all they need to know about a character.

In real life, it is easy to simply use your eyes and see how fashion says something about someone…and social media helps. Emma Chamberlain wore a look for this year’s Met Gala that could have been iconic…except she chose to wear a necklace that had been stolen from an Indian king. So now her fashion choice doesn’t relay the wealth, status, influence, and Western beauty that she no doubt wanted to relay. Instead, her fashion choice became a powerful symbol of the how the insidious nature of European colonialism isn’t a relic of the past but rather living history.

I say this because a fantasy author’s fashion choices, or even lack of fashion choices, are still a statement to readers. Whether the intended results have a predicted impact or an unpredicted one is in the hands of readers.

Interestingly, in Letter No. 211, J.R.R. Tolkien wrote, “I do not know the detail of clothing. I visualize with great clarity and detail scenery and ‘natural’ objects, but not artefacts.” I personally believe that Tolkien was too focused on the historical details and spiritual metaphors laden in his stories to worry about fashion. But fashion was still important in how his story became popular to millions of fans; in fact, Peter Jackson had a different idea for the film adaptations of the Lord of the Rings trilogy. Jackson needed to visually relay Tolkien’s historical details and spiritual metaphors without the use of words, and fashion was the answer. This is why we see Galadriel dressed in pure white, almost like an angel, when we first see her in Lothlórien. Now this makes sense, because as we know from Unfinished Tales, “The History of Galadriel and Celeborn,” “Even among the Eldar she was accounted beautiful, and her hair was held a marvel unmatched.” What better way to show the beauty and fairness of this character than through her all-white clothing? Viewers will also understand the subliminal messaging in her all-white attire.

In A Memory Called Empire by Arkady Martine, a noblewoman called Nineteen Adze appears within the first 100 pages of the book and is described as “a Teixcalaanli woman dressed entirely in bone-white: trousers and many-layered blouse and a long asymmetrical jacket.” My first thought when I read this was: power suit. Nineteen Adze was wearing a power suit that efficiently relayed her social status, power, and influence. In one sentence, Martine established the foundation of an important character, relaying her power and status in relation to the young diplomat who is the protagonist. Any deviation from this image of the power suite will now reflect a change in status for Nineteen Adze.

This is also the second example in which I’ve mentioned white to relay power and even beauty. In fashion, white is considered to a “basic” color that can be matched with practically every other color on the wheel. But don’t let that fool you. White can symbolize purity (e.g., a bride on her wedding day), but it historically could also represent privilege because it’s so hard to keep clean. But here’s a catch: white for Hindus is a color of mourning. I wouldn’t be surprised if there was a Hindu who first saw Galadriel on screen and wondered for a moment if she was coming back from a funeral.

This brings me to my next point: Clothing described by authors is a direct reflection of their own cultural perception of the world. For all his mastery of the written word and meticulous world building, Tolkien was still a 20th century man who probably saw fashion as something in the realm of women. After all, most of his female characters wore traditionally feminine clothing. When Eowyn subverted gender roles in the final battle, it was a pointed difference that was decidedly out of norm for Middle Earth.

On the other hand, Martine published A Memory Called Empire in 2019 and no doubt knows of the cultural discourse surrounding power suites to symbolize women trying to break the glass ceiling.

Science fiction and fantasy novels are imagined worlds that come out of the minds of authors. The clothing worn by the characters and power players in these books is not only a reflection of the status of those characters in that world but also how that author perceives that clothing. In the Western world, white is a symbol of innocence and purity, the perfect color for a fair Elven queen. It is also a basic color that can make a statement when used for a suit, the perfect color a powerful courtier.

Want to learn more? Read all about the relationship between fashion in literature.