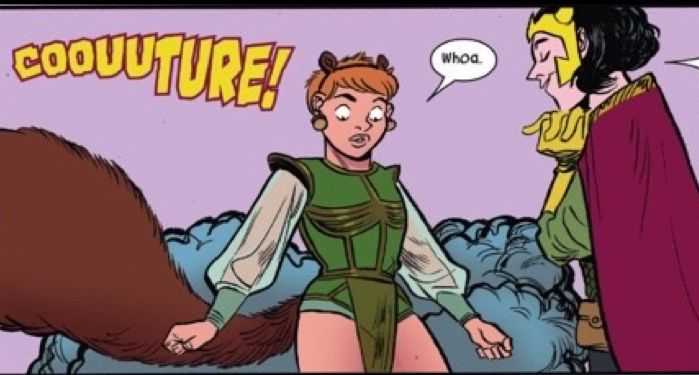 If you’ve been around for a while, you may have seen some of my Fashion Disasters articles, where I highlight the poor sartorial choices of superheroes who just can’t seem to get their act together. Superhero comics truly are the gift that keeps giving for those of us who are endlessly entertained by spandex wrought hideous, but every so often a hero comes along who flips the script. Who serves looks from their debut appearance onward. Who looks at the genre’s weird headsocks and tiny gloves and excessive zippers and says: “Not today. Not ever.” They are the few, the proud, the Fashion Heroes. Today: Squirrel Girl!

Doreen Green, AKA Squirrel Girl, debuted in Marvel Super-Heroes #8, AKA Marvel Super-Heroes Winter Special (Winter 1991), and was created by Will Murray and Steve Ditko. Doreen, who has all the powers of a squirrel and all the powers of a girl, was a relatively obscure character until a few years ago, when she enjoyed a meteoric rise in popularity, thanks largely to her delightful 2014 solo series, The Unbeatable Squirrel Girl. But I’m going to say it’s also because she is relentlessly fashionable. Let’s take a look at some of the ensembles she’s blessed us with over the past 30 years!

Here we have Doreen’s very first appearance. Now, I know what you’re saying: she looks simultaneously goofy and kind of terrifying. And you’re right! (Also I don’t know why Steve Ditko apparently thought squirrels had weird diamond shapes around their eyes.) But, I will make two points on her behalf: one, this costume is supposed to be a joke, and as such it succeeds marvelously. And two, she’s only 14, she’s a brand-new superhero, and her mom sewed this for her. We all have to walk before we can run, even squirrels!

Now, this is more what I’m talking about! This was Doreen’s baseline look until Unbeatable Squirrel Girl, and it’s a classic. It’s very simple, but the earth-toned color palette — and, you know, fur — makes it distinctive. It’s stylish, still funny, and probably extremely cozy. Even the weird eye things are toned down! Great job, Doreen!

This festive costume is just for a cover gag — she doesn’t even wear it in the comic itself — but it’s an early precursor of one of the things that makes Doreen’s fashion sense so delightful: she dresses for the occasion. There are so many context-specific variations on her costume, and they’re always cute. Look at the jingle bells on her hips! God, I love her.

Here it is: The Unbeatable Squirrel Girl. This is the time when we bask. Ahhh.

While Doreen had always looked cute, series artist Erica Henderson redesigned her to be consciously, undeniably fashionable. The bomber jacket! The boots with the fur! The whole Avengers lineup is looking at her!

No but seriously, Henderson takes silly elements — the squirrel ear headband! the acorn earrings! — and makes them adorable and purposeful. This costume doesn’t just tell you that its wearer has all the powers of both squirrel and girl, this costume looks like something actively fun to wear, that Doreen clearly feels great in. A+ all around.

(Is this whole article just an excuse to gush about Henderson’s work? Only somewhat!)

Doreen soon rolled out another outfit, also designed by Henderson, and would switch back and forth between the two at will. This one feels a little less action-oriented to me, but it’s still completely adorable. The skater skirt over leggings is an option I’m always surprised more superheroines haven’t adopted, and the pop of red with the ballet flats and matching pouches? Chef’s kiss.

(Also, how much fun are those alternate universe versions? The Catwoman-esque Golden Age Squirrel Girl! So elegant! I die!)

But remember what I said about situationally appropriate outfits?

Here’s Doreen in Asgardian regalia upon lifting Thor’s hammer. Now, everyone looks amazing in Asgardian clothes to begin with, and Doreen’s aesthetic translates particularly well (the fur!). I don’t know what to call that thing around her waist (a girdle?) but I want two for both casual and formal occasions.

Serving patriotic WWII flying ace realness as a U.S. Avenger! I can’t decide whether I love the bandanna or the goggles more.

And speaking of flying, how sleek is this flying squirrel suit? I’m especially in love with the chest icon for some reason. Okay, yes, this costume was designed by a villain, but Marvel villains are peak fashion. We’ve all seen Magneto.

And speaking of villains, Loki whipped this one up when Doreen needed a space fantasy look, and it’s perfect. The sheer blousy sleeves? The loincloth? I want to cosplay this, some day when we can all go to conventions again. I especially love that while this was created by an Asgardian and would absolutely fit in there, it bears zero resemblance to Doreen’s earlier Asgardian look. Clearly one of the powers of a squirrel is versatility.

And when the Thor franchise spills over into the rest of the Marvel universe and Earth is frozen over, Doreen whips out this arctic number. I’ll be honest: this is the look (designed by Derek Charm, who did a stupendous job following Henderson as the series artist) that made me want to write a Fashion Heroes column about Doreen, because it is so perfectly themed and stylish. And the attention to detail! The acorns on the shoulders! Doreen, you are always on point.

The Unbeatable Squirrel Girl was lightning in a bottle, but given how high it raised Doreen’s profile (she was a New York Times bestseller!), Marvel is leaving money on the table if they don’t keep putting her front and center going forward. Here’s hoping we continue to see lots of Doreen, and that she continues to serve looks. And nuts, probably.