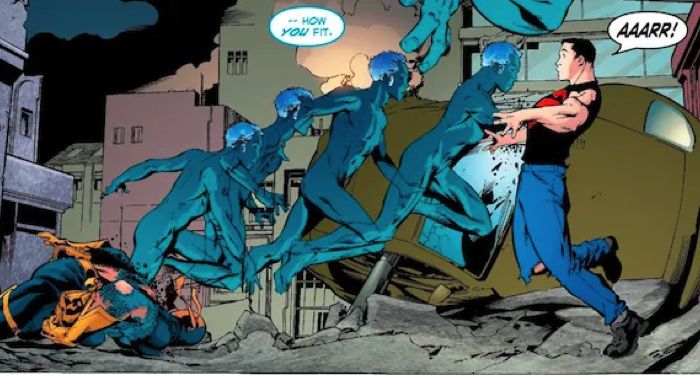 Here on Fashion Disasters, we’ll showcase those poor slobs who just can’t seem to get it right. Today: Jericho!

Joey Wilson, AKA Jericho, first appeared in Tales of the Teen Titans #43 (June 1984) and was created by Marv Wolfman and George Perez. He was the son of the assassin Deathstroke the Terminator, with mutism and the ability to jump into other people’s bodies and possess them by making eye contact. When he wasn’t wearing someone else’s skin, though, he looked like this:

I’ve been asked to cover Joey in this feature before, but to be honest, I’ve put it off for years because, like, how do you even discuss this outfit? It’s sort of medieval-themed, in an extremely inaccurate Saturday morning cartoon kind of way, but, like…why? Why is it also a turtleneck? Can he even bend at the waist with such a huge gemstone over his navel? Does he actually have a cape or is it just a little dust ruffle? What on Earth is happening here?

I have so many questions, George Perez.

Joey stuck with this look for years, though by the early ’90s it had evolved a bit:

This hair is less baffling, in that I’ve seen long curly mullets on actual humans before — usually when they are the roadies at Bon Jovi concerts — but that doesn’t mean it’s good. The fuchsia has been toned down to more somber brick red, but that still doesn’t explain why he looks like a minor character on He-Man when, again, nothing about his origin or powers is the slightest bit medieval or fantasy. (Though he is a theater geek, which could explain it.)

Tragically, Joey was possessed by evil spirits and mercy killed by his own father, only to return about a decade later without a body:

This is probably his best look, and he’s naked and blue. But hey, it worked for Dr. Manhattan.

Joey’s soul was eventually trapped on a floppy disk (this will never stop sounding hilariously archaic to me, and I read that comic when it came out), but eventually he was restored to a new body, his soul presumably purified of evil influences…at least until they needed him to go evil again for plot reasons:

This is…okay, so I look at it and I think, “Well, it’s not bad…” but isn’t it? Is this actually a decent costume, or is it just an improvement on his original look(s), and also an improvement on the Deathstroke and Ravager costumes, which I think we all need to finally admit have always been bad? My favorite part is the scale mail only on his shoulders, which we all know are the most vulnerable and vital spots on the human body.

SIDE NOTE: Yes, I said it, these costumes are all bad:

Joey had barely settled into his new pastel duds when the New 52 happened. And also Rob Liefeld.

Well, first of all, as much as I dunked on the curly mullet before, I don’t think relaxing his curls and then cutting them with a Flowbee was the right call. Look, it took his eyebrows off, too!

If we just focus on the costume here, and nothing else about the art — and yes, I know that’s a big ask — it’s just sort of…nothing? Like, yes, it sort of picks up the powder blue/lavender/charcoal/gold color combo from his previous look, but it’s just sort of…random spandex color blocking, and also bracelets for some reason? Nothing really evokes a) his iconic look, b) either of his parents, c) his powers, or d) his codename (which is itself completely random, but still). It’s not terrible. It’s just lazy.

Fortunately(?) DC is addicted to rebooting, so before long we discarded the New 52 and moved into the Rebirth era:

Okay. So. This costume, in and of itself, is not bad in any way. It’s well designed and, in all the art I’ve seen of it, beautifully drawn.

It’s also deeply, deeply generic — so generic that every time I look at Joey in it, my brain can’t even process it as a DC Comics costume. I’m like “Oh, is this someone from an Image book? Wildstorm?” It’s too sedate, too efficiently cool. It’s sleek as hell, but there’s no heart.

He did sport this variant for one issue, which was not a great personal decision because he metaphorically sold his soul to the devil for it, but sartorially, it’s an improvement. The colors add a little more personality, and the blue evokes all of his previous costumes/naked ghost adventures, and even suggests the Wilson family’s penchant for silly blue scale mail. I never thought I’d miss the scale mail, but this costume makes me feel downright nostalgic. Now all he needs are some puffy sleeves.

Joey immediately returned to the black and white, which he wore through the end of last year; he hasn’t been seen in the Infinite Frontier era yet. It’s anyone’s guess whether he’ll be good, evil, or torn between the two when he inevitably pops up again, but to my mind that’s a secondary question. The more important question is: will he have mutton chops?

The 2003 animated Teen Titans pared down the baroque nonsense of his original costume for this cute as a button design. I’m not sure it would work in the comics, but don’t you just want to pinch his cheeks?

Meanwhile, the Earth One graphic novel universe went full prep, complete with cuffed khakis and sockless loafers. I’ll admit I am basic enough to absolutely love this look, even if I didn’t love the direction this universe took the character in. Don’t let the head-to-toe J. Crew fool you; he’s all goth inside.

What do you think, friends? Can Joey’s classic threads be redeemed? Is he better off so generic as to be barely perceivable by human eyes? Is Civil War–era facial hair making a comeback? Mysteries, all.