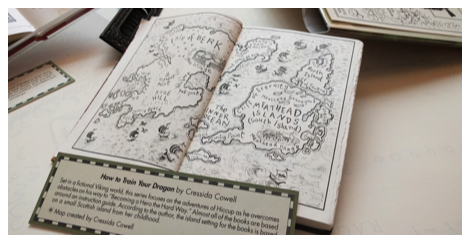 Anyone who reads fantasy knows that when you crack open a volume and see a map, shit’s about to go down. And by shit, I mean, epic fantasy adventures. Buckle up, dear reader, because here be dragons. 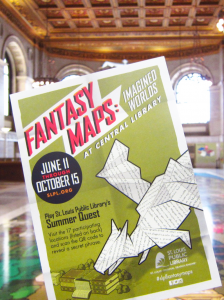 recently moved from the plentiful land of pearl milk tea known as California to Missouri. Fittingly, the moment I stepped into the St. Louis Central Library, I was greeted by maps upon maps – the perfect welcome for someone new to the area.

In cooperation with the city, the St. Louis library has an exhibit going known as “Fantasy Maps: Imagined Worlds.” You can pick up maps at the front desk that transform St. Louis and its landmarks into a fantasy landscape. On top of that, maps from iconic fantasy books are on display in the Great Hall and throughout the library.

For children’s books, there were the usual suspects. Winnie-the-Pooh‘s hundred acre woods, and the landscapes of the Warriors series and the Redwall series. Bears, cats, and rats – oh my! I was surprised to see maps for How to Train Your Dragon and The Phantom Tollbooth as well. 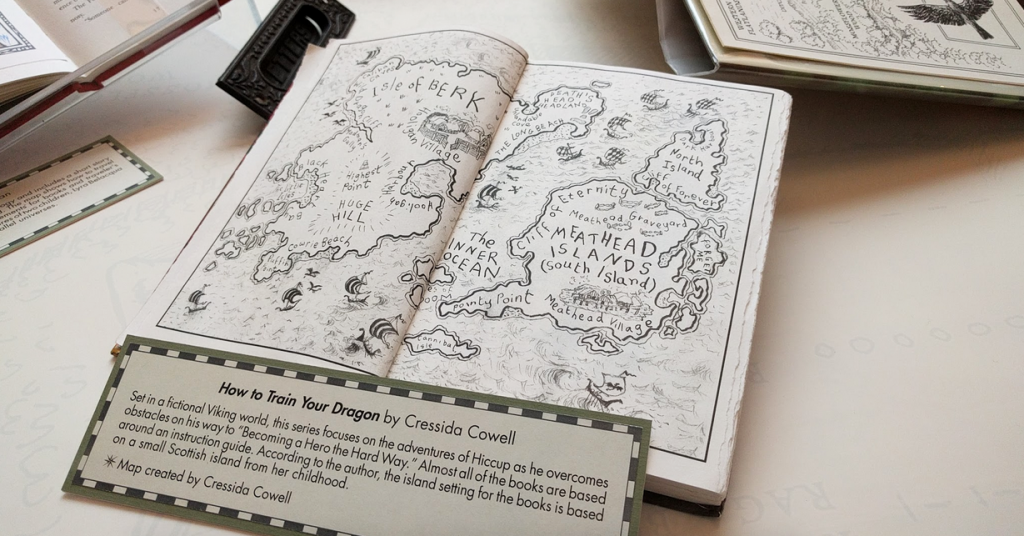 How to Train Your Dragon by Cressida Cowell

There were also a few books for teens, such as Wings of Fire by Tui Sutherland, Eragon, and of course, Harry Potter! A large version of the Marauder’s Map was on display in the Great Hall – fitting, considering the Great Hall kind of resembles the one in the movies. 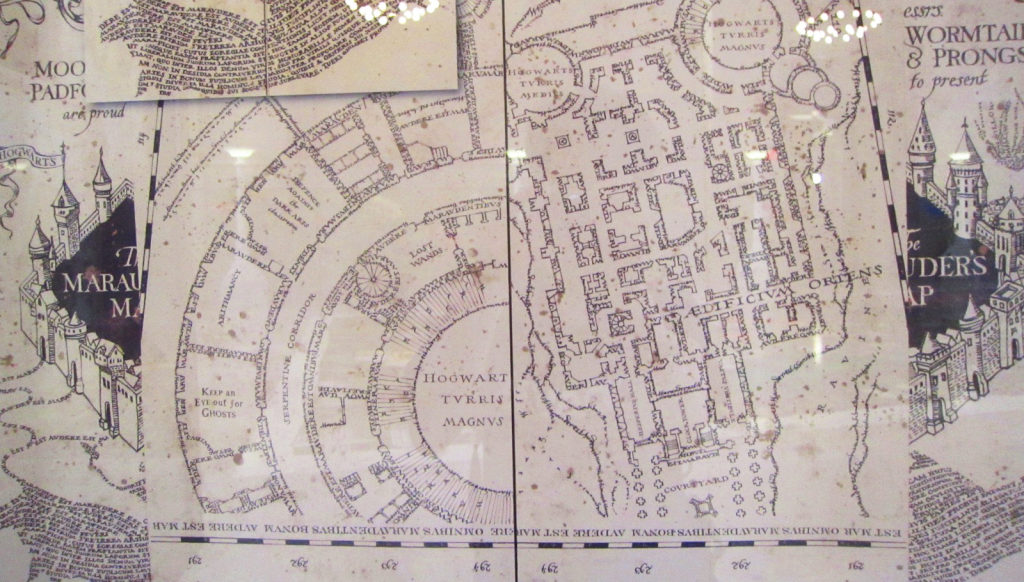 The Marauder’s Map from Harry Potter

The vast majority of the maps were from ye olde fantasy novels for adults. I had a fangirl moment over the Game of Thrones. Also in the Great Hall were the maps for Blackmantle, Starshield Sentinel, and Night of Knives. In a gallery on the second floor were maps for The Elves of Cintra, The Summer Tree, The Seventh Sigil, and well, more Game of Thrones. 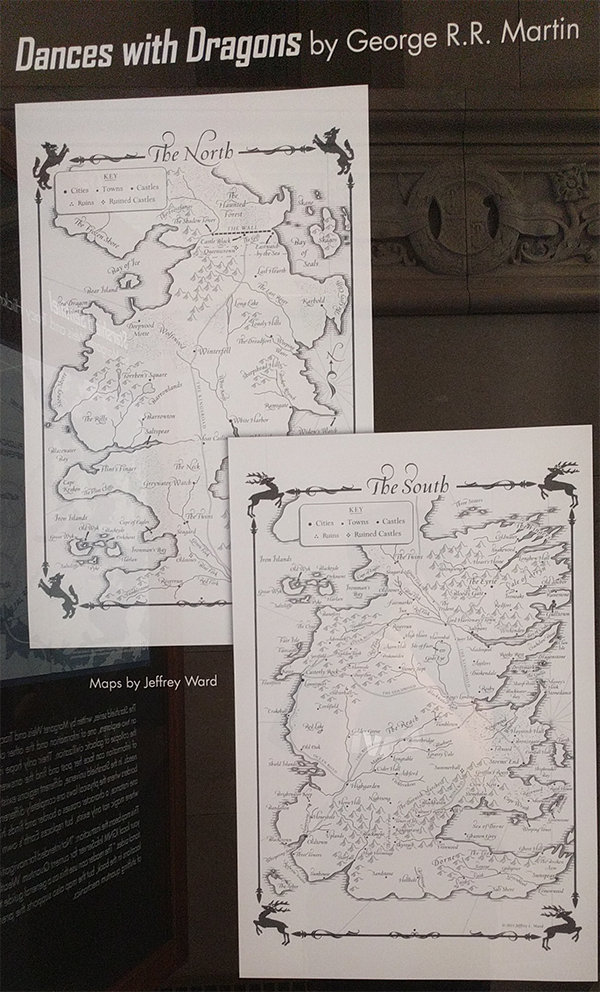 The theme of the exhibit was ‘imagined worlds,’ and this was driven home by the intermingling of reality with fantasy. The re-imagined real world was set alongside maps from classic fantasy books. And when you’ve got a fantasy map, you know you’re in for a very particular kind of fantasy story. There will be treks across mountains, creatures from the deep ocean, and mysterious visitors from afar. Epic sagas only, please.

But looking at the maps in the library, I noticed that most of them were not exactly current, and that they were largely by white authors. Unsurprising given the history of classic SFF. The one exception was Tui Sutherland’s Wings of Fire, which is about dragons, so you know I’m putting that on hold.

I love classic fantasy books, I really do. But seeing all those maps just reminded me of the Japanese concept of “kunimi”, literally “surveying the land.” This is the idea that when you survey and name a land, you’re declaring sovereignty over it. You named it, you claimed it. That concept maps (haha) pretty neatly to how colonialism was carried out abroad by Western powers — take away a country’s identity by force or political maneuvering, and it’s yours, long after the occupying government is gone. 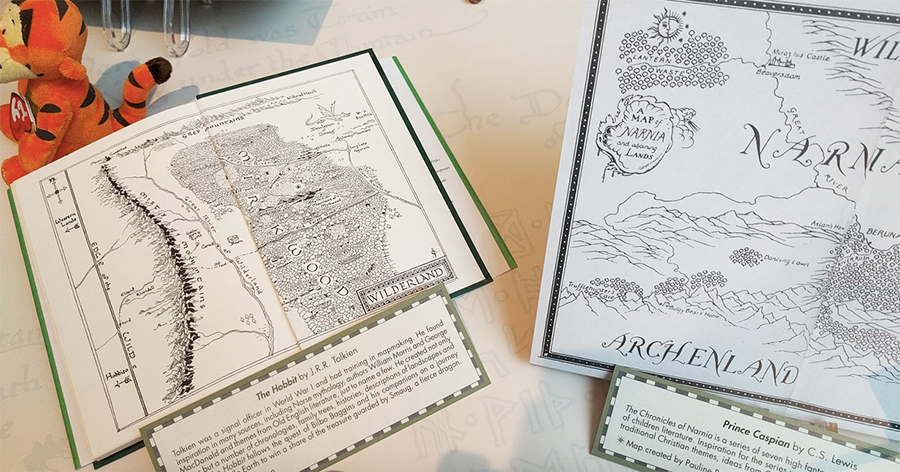 The Hobbit and Prince Caspian

Depending on who makes the map, they can be a kind of declaration of sovereignty – and fantasy maps are an extension of that. They promise adventure in exotic, foreign lands and true knowledge of your own kingdom. But that’s only one side of the story. Foreign lands aren’t foreign to the foreigner. What would a map look like to someone who isn’t the hero of the book?

Heroes, the ones who get to traverse entire kingdoms while your average peasant chills in the radish patch back home, are made of noble stuff. They’re the youngest prince, or the obstinant princess, or the long-lost heir to the throne. If not that, then they’re the diamond in the rough. The one commoner who rises above it all. (Psh, class barriers.)

I may just be overthinking it. But this quote from Moon Over Soho by Ben Aaronovitch sums up my feelings nicely:

“I asked about other countries—China, Russia, India, the Middle East, Africa. I couldn’t believe that they hadn’t at least some kind of magic. Nightingale admitted that he didn’t really know, but had the good grace to sound embarrassed.

“The world was different before the war,” he said. “We didn’t have this instantaneous access to information that your generation has. The world was a bigger, more mysterious place—we still dreamed of secret caves in the Mountains of the Moon, and tiger hunting in the Punjab.”

When all the map was red, I thought. When every boy expected his own adventure and girls had not yet been invented.”

After checking out the exhibit, I wanted to see imagined worlds by PoC. Happily, a quick google search turned up an index of fantasy maps, which includes maps of An Ember in the Ashes by Sabaa Tahir, The Fifth Season by N.K. Jemisin, and Throne of the Crescent Moon by Saladin Ahmed. Each of these books were published in the last five years, so they’re fairly recent.

If you’re into fantasy maps old or new and you’re in the area, definitely stop by the exhibit. You’ve got until October 15th. If you can’t make it there, you can check out #slplfantasymaps photos on Twitter or Instagram. The maps are great to look at, and their accompanying descriptions are incredibly thoughtful and educational.

And the more I think about it, the more it feels like the Fantasy Maps exhibit theme is perfect – “imagined worlds.” It points to how subjective our view of the world is. Accordingly, we can re-imagine it to become whatever we want – some place magical, some place that’s ours.