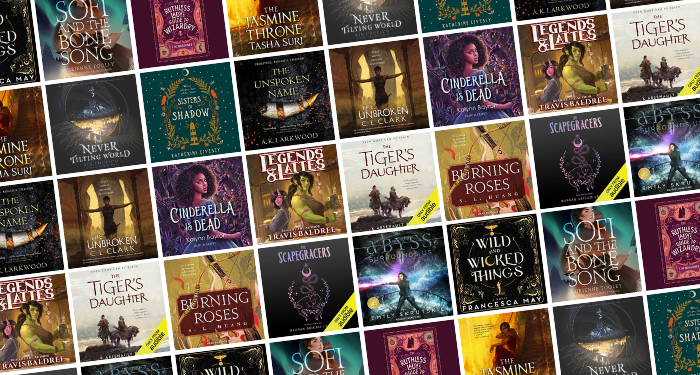 I think we’ve all got tasks throughout our day when we need our hands to do something, but our brains are otherwise unoccupied: doing the dishes, folding laundry, the bus ride to and from work. Maybe parts (or all) of your 9 to 5 is organizing spreadsheets or copy and pasting data over and over again. Maybe you need something to focus on so you don’t get so distracted by people walking by your cubicle or chatting next door. Whatever the reason, audiobooks are a great option to fill all of that silence (or tune out the noise). Even better, there are audiobooks for any genre or topic you might want, including fantasy lesbian audiobooks!

There are middle grade audiobooks, nonfiction, romance — you name it and they’re out there just waiting for you to hit play. I know I’m not alone in being picky with my narrators, but that’s the great thing about just how many options are out there. If one isn’t working for you, you can always try another. And, most libraries have a wide selection of audiobooks, so it costs you nothing to give it a shot.

Maybe you want something sapphic or something other-worldly. Or, better, maybe you want both! If that’s the case, you’ve come to the right place. Here are the best fantasy lesbian audiobooks to start listening to now! 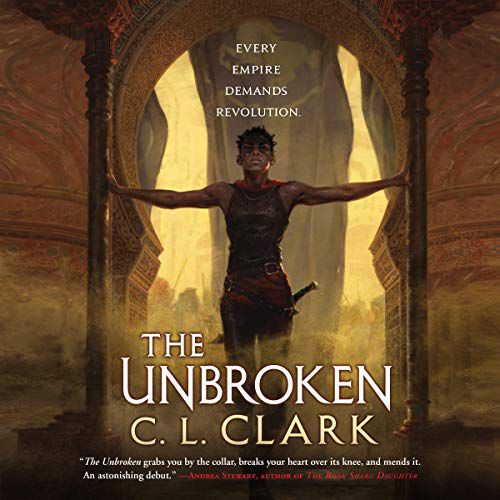 The Unbroken by C.L. Clark, Read by Rasha Zamamiri

Touraine was raised to live and die for her empire. Including, it seems, stopping her own homeland from rebelling. When she crosses paths with Luca, fighting to keep a war at bay so she can overthrow her uncle and claim the throne for herself, they are caught navigating tricky waters together. Touraine’s a lesbian, Luca is bisexual, and their relationship develops through murder, blood, and mischief. 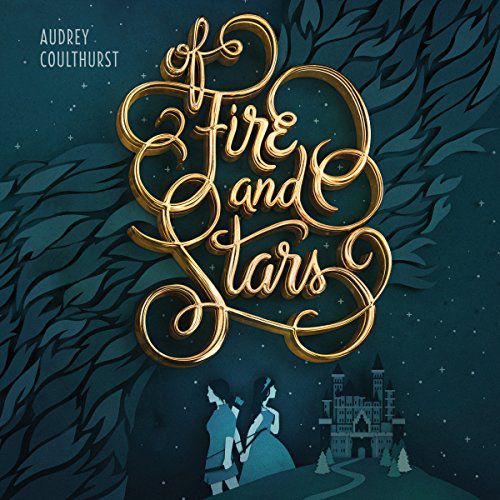 Of Fire and Stars by Audrey Coulthurst, Read by Saskia Maarleveld and Moira Quirk

Princess Dennaleia is set to marry Prince Thandi of Mynaria, an alliance to keep her people safe. But, with her forbidden magical powers getting too strong to conceal and the disdain she feels for the prince’s sister, Amaranthine, acclimating to a new land is not easy. After an assassination shatters any sense of stability she had, Deena teams up with Mare to enact justice. Their disdain, though, quickly turns into something else with just as many sparks. This YA fantasy with a lesbian and bisexual forbidden romance is the slow-burn fantasy of your dreams. 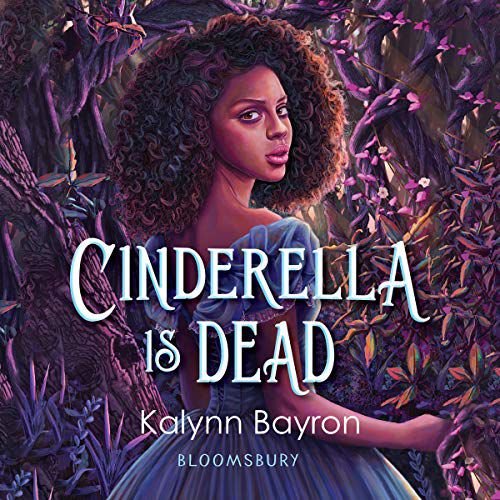 Cinderella is Dead by Kalynn Bayron, Read by Bahni Turpin

This is a Cinderella retelling in which Black girls overthrow their kingdom and the patriarchy (and fall in love!). In the kingdom, girls must present themselves at the Annual Ball where men select their future wives. Those who aren’t picked disappear. Sophia, now 16, has reached the age to do just that, but she flees instead, running into the last descendant of Cinderella on her way. Together, they vow to bring the whole system crashing down! 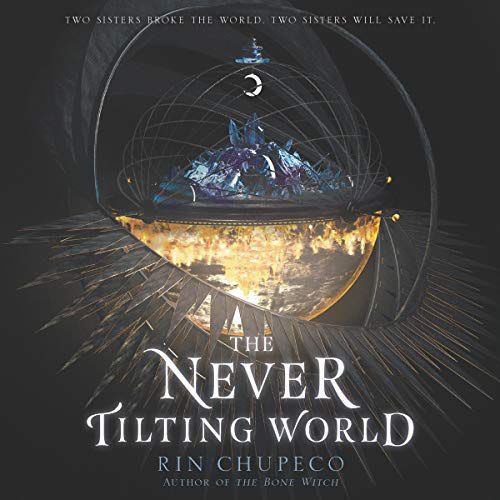 A Great Abyss divides the realms of night and day, each ruled by different goddesses. As their worlds deteriorate more and more each day, their daughters Odessa and Haidee, must set out together to save the world. With the help of a healer and a scavenger, they journey to the Breaking to find a solution. This YA fantasy full of sandworms and sand dolphins is a must-read, especially with its lesbian and bisexual protagonists! 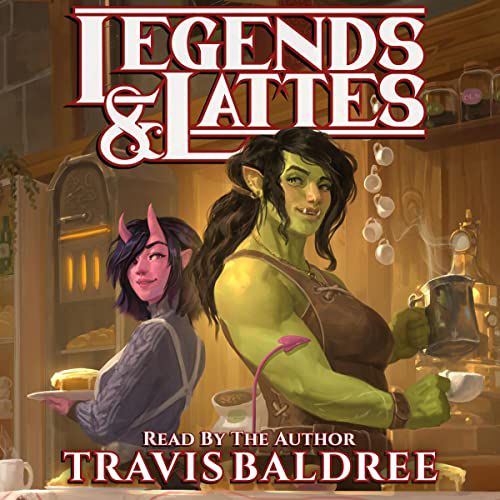 Viv is an orc barbarian who wants something different than the life of a warrior. She wants to open a coffee shop, the first one of Thune. But, when ghosts of her past creep out of the city’s woodwork, she’ll need help from a few friends to make her dream come true. This slice-of-life, cozy fantasy with a lesbian love story side plot is as humorous as it is heartwarming! 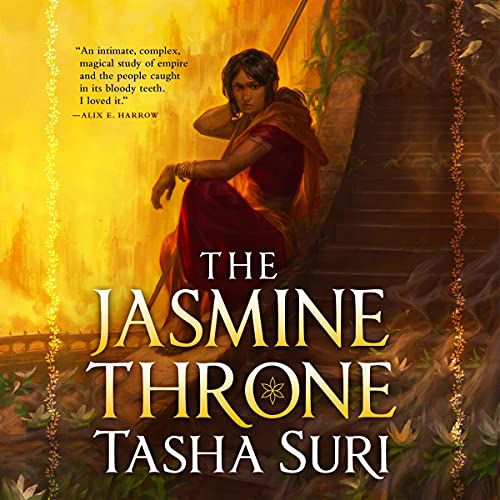 The Jasmine Throne by Tasha Suri, Read by Shiromi Arserio

Malini is isolated in the ruins of a once-great ancient temple, imprisoned by the dictator who also happens to be her brother. Priya is a maidservant tasked with making the dangerous journey to the temple to clean Malini’s chambers. When Malini witnesses the secret power Priya hides, they pair up to get their revenge against the world that has cast them both into the shadows. Lesbian protagonists in a fantasy world based on India? Sign me up! 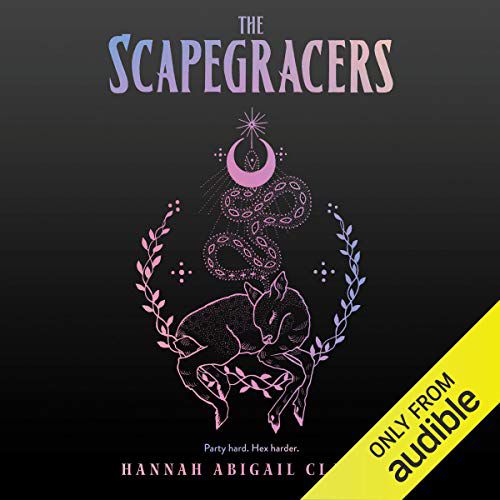 The Scapegracers by Hannah Abigail Clarke, Read by Eileen Stevens

Sideways Pike is a witch. Oh, and also a lesbian. And she’s basically the lowest on her high school’s popularity list. So, life isn’t exactly a breeze. But when three of the girls at the top pay her to cast a spell for them, she is granted membership amongst them. The four become inseparable, casting curses, escaping witch hunters, and dealing with regular high school social minefields like parties and finding a girlfriend all at the same time. This love letter to teenage girls, complicated female friendships, and growing up is a must-listen. 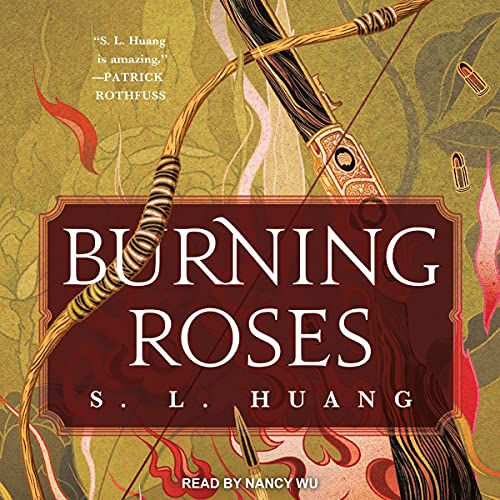 It’s fairy tale retellings galore in this fantasy novella! Red Riding Hood, Goldilocks and the Three Bears, and Beauty and the Beast all come together in this story of Rosa and Hou Yi who go on a quest to stop the deadly sunbirds destroying the countryside. Along the way, they face the pasts they’ve been desperate to outrun and find connection in each other. If you’ve ever wanted a lesbian Red Riding Hood, a transgender Hou Yi, or middle-aged women falling in love, this one’s for you! 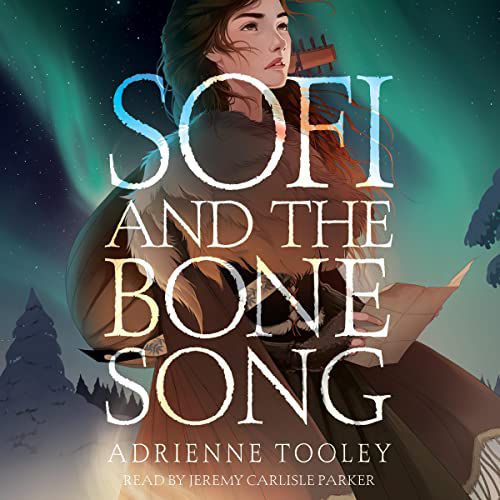 Sofi and the Bone Song by Adrienne Tooley, Read by Jeremy Carlisle Parker

The daughter of one of the only musicians in the country allowed to compose music, Sofi has music in her blood. She has spent her life training to take her father’s title, but another girl at the auditions wows the judges, cheating her out of her rightful place. As Sofi tries to win back her title, and learns more and more about Lara, what she thought about the world and about the girl who should be her enemy becomes less clear. The lesbian main characters aren’t the only queer rep in this one: there are queer and nonbinary side characters too! 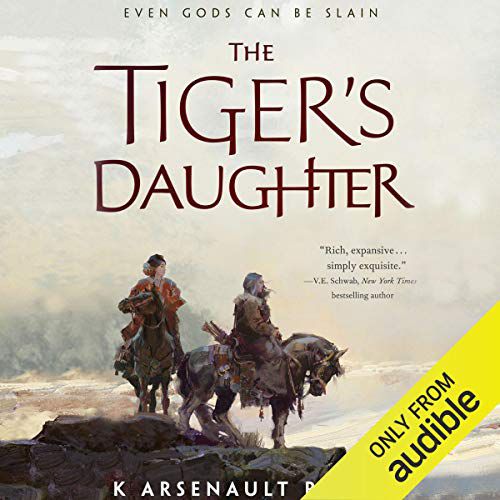 If you’re looking for a long listen, this is a great choice. This rich, expansive f/f fantasy novel follows Shefali, a Qorin warrior, and Shizuka, a sheltered empress, as they fight the demons threatening the lives of their empire. With worldbuilding inspired by the Mongol empire and a slow-burn romance that perseveres through monsters and adventures alike, you can’t go wrong with this one. 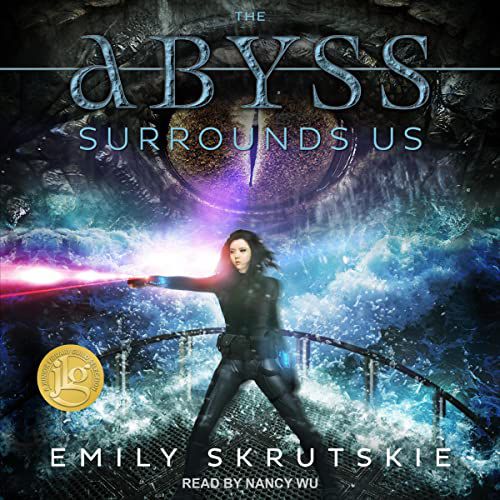 The Abyss Surrounds Us by Emily Skrutskie, Read by Nancy Wu

It’s sea monsters and lesbian pirates in this sci-fi fantasy full of floating cities and enemies to lovers romance. Cas has been a Reckoner her whole life, it seems, raising genetically-engineered guard monsters for their voyages across the NeoPacific. But, when notorious pirate Santa Elena captures her, the life she had known is over. To stay alive, Santa Elena demands Cas raise a monster for the pirate queen instead. Morally gray lesbians, anyone? You’ve come to the right place. 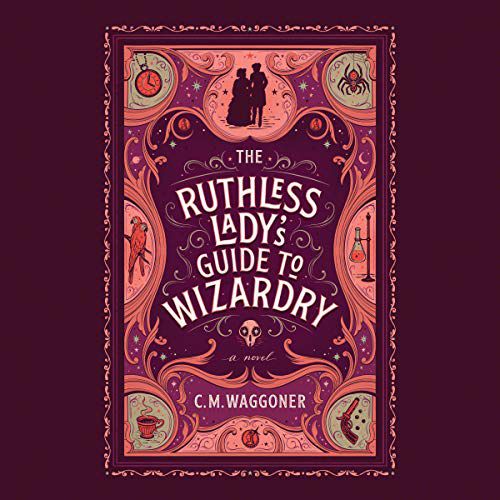 The Ruthless Lady’s Guide to Wizardry by C.M. Waggoner, Read by Ava Lucas

When Delly, a thief with a thirst for drinking and danger, sees an ad to be a bodyguard for a rich lady getting married, she sees dollar signs. How hard can it be to protect one person, especially with the team of other women she has hired? But soon attacks start and don’t seem to stop. Amidst fighting against their magical enemy and keeping their charge safe, Della starts to fall for another of the bodyguards, Winn. But will they make it out of this job alive? 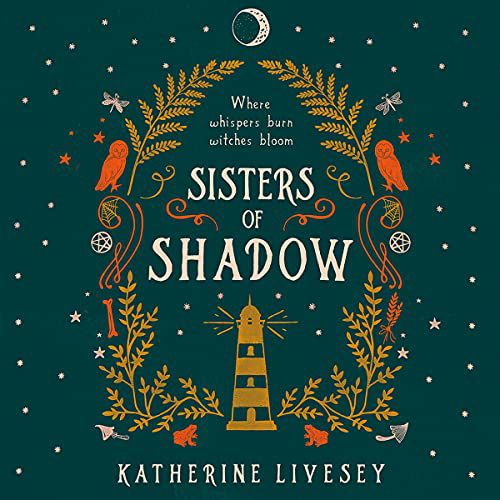 Sisters of Shadow by Katherine Livesey, Read by Taz Munya

Alice, a young witch, long ago learned those who love her always leave her behind. Everyone, that is, except her best friend Lily, an apothecary. When Alice is abducted into a coven of witches, she’s enamored by a girl she meets there, Grace, who pledges to protect her. But when Lily sets off on a mission to rescue her, loyalties, feelings, and true love will be tested. It’s the f/f whimsical fantasy of your dreams. 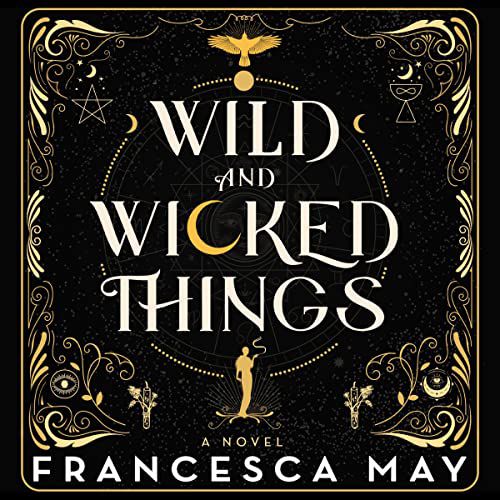 Wild and Wicked Things by Francesca May, Read by Marisa Calin, Gemma Dawson, and Ralph Lister

Annie Mason comes to Crow Island to deal with her father’s estate, but the magic of the island threatens to get in the way of that. After Annie sees the rumored witch Emmeline in a confrontation with Annie’s old friend, she finds herself in a world of temptation. With alternating POVS, f/f romance and the glittering world of Crow Island, Wild and Wicked Things will entertain you the whole way through. 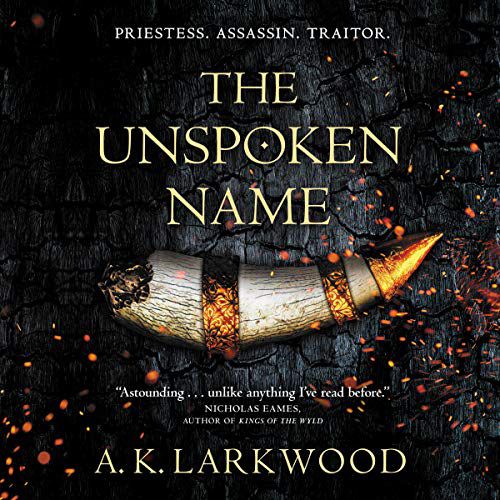 The Unspoken Name by A.K. Larkwood, Read by Avita Jay

Csorwe was destined to die at 14, a sacrifice to her people’s god. But, on the day of her death, an exiled wizard convinces her to escape and become an assassin for him instead. On an assignment to get a powerful relic alongside another of the wizard’s employees, Tal, loyalties are tested and relationships grow in unexpected places.

I hope you add one or two (or ten) of these to your fantasy lesbian audiobooks queue and enjoy! If you want some variety for your ears, try these bi and lesbian literary fiction novels or these sapphic science fiction books, too!