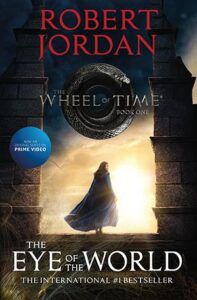 Read the first novel in Robert Jordan's internationally bestselling epic fantasy series, The Wheel
of Time®. Soon to be an original Prime Video series starring Rosamund Pike as Moiraine!
Since debuting in 1990, The Wheel of Time® has captivated millions of readers around the
globe with its scope, originality, and compelling characters. The last six books in the series were
instant #1 New York Times bestsellers, and The Eye of the World was named one of America's
best-loved novels by PBS's The Great American Read. The Wheel of Time turns and Ages come and pass, leaving memories that become legend. 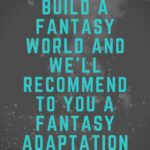 Fantasy will always be my favorite genre. And one of the things I love about it is that it has always provided a great source of escapism for everyone. Plus, it makes you believe that magic is real, and things are more extraordinary than they seem — at least for a little while. But I digress. Fantasy is a wonderful genre, no matter the format. Also, when you combine it with the joy of seeing your favorite story on a screen that wonder grows tenfold.

Furthermore, I know that the most important thing about any fantasy book is its worldbuilding. So, this quiz has 11 questions that help you design your own fantasy world — and by answering them you will get a fantasy book adaptation recommendation!

So grab your sword — or staff — and get ready. This quiz will match you to the fantasy book adaptation that you should watch next!

Want to know the other results? Check them out below!

Based on the books by Leigh Bardugo, this TV show tells the story of Alina Starkov. One day she realizes she has the power to destroy the curtain of darkness that cuts through her world — but will she be able to do it? Shadow and Bone is full of magic, mayhem, and a very good-looking antagonist.

This TV show is based on the book series by Philip Pullman. It tells the story of Lyra who sets out on an adventure to save her best friend and discover the meaning of the mysterious Dust that everyone seems to fight over. His Dark Materials is a dark coming-of-age story full of talking animals and alternate worlds!

A TV show that is based on Neil Gaiman’s urban fantasy book. The show follows Shadow Moon, a man who is hired as a bodyguard and stumbles into a conflict between the Old Gods and the New Gods. American Gods is a dark and gritty fantasy about belief and community.

This is a historical fantasy based on Yangsze Choo’s book! It’s about a woman who is set to become a ghost bride to a dead man. She’ll spend the rest of her days haunted by a ghostly spouse and a bigger mystery than she ever imagined. The Ghost Bride is a wonderful adaptation full of folklore and adventure!

Watch this brilliant anime of the Filipino komik series by Budjette Tan! It’s the story of Alexandra Trese, a detective who deals with the supernatural in the streets of present-day Manila. Trese is a dark fantasy full of monsters and amazing animation!

A famous anime based on Hajime Isayama’s manga. It’s the story of Eren, a teenager who is determined to save humanity from the titans that threaten to eat everyone. Action-packed and shocking, Attack on Titan is truly unique and worth watching!

This is a beloved and classic Ghibli film inspired by the Diana Wynne Jones book! It’s the story of Sophie, who lives an ordinary life until she’s cursed by a witch. With her life turned upside down, she joins the wizard Howl — and her life will never be the same! Howl’s Moving Castle is a softer and more classic type of fantasy and Miyazaki’s animation really brings it to life!

This is a movie adaptation of Eoin Colfer’s first book in his Artemis Fowl series! It’s the story of Artemis, an Irish 12-year-old genius and criminal mastermind who finds himself in the middle of a battle with powerful faeries. Artemis Fowl is a fast-paced, fun story that mixes fantasy with sci-fi!

Want to discover new book recommendations or just have fun? Check out the quizzes below!